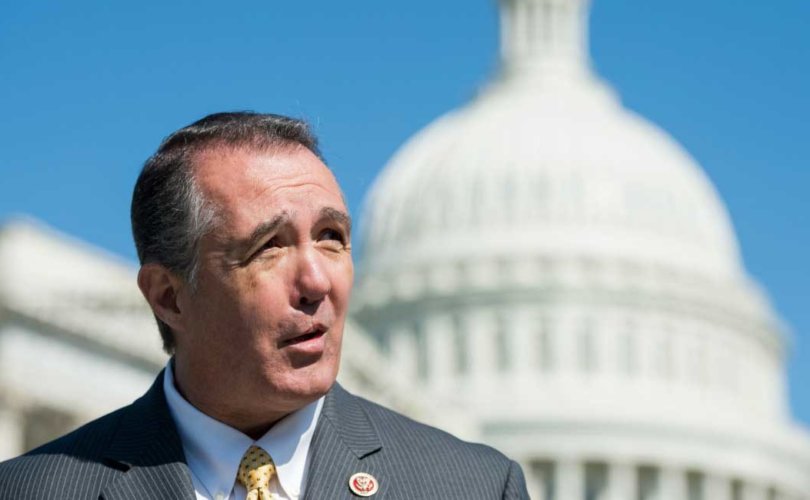 A House Judiciary subcommittee held a hearing led by Rep. Trent Franks, R-Ariz., on Sept. 23 examining legislation that would give rights to infants born alive after an abortion.

WASHINGTON, D.C., September 23, 2016 (LifeSiteNews) – As the two parties prepare for the first presidential debate on Monday, one question should be on every American’s mind: Where do they stand on allowing abortionists to practice infanticide?

Congressman Trent Franks and other passionate pro-life advocates asked the candidates to address the issue as they discussed the more than 100 newborns who were allowed to die after being born during botched abortions during a Congressional hearing on Friday morning.

One baby who survived such a fate is Gianna Jessen, who was born weighing just two-and-a-half pounds after a failed saline abortion in 1977.

“Apart from Jesus Himself, the only reason I am alive is the fact that the abortionist had not yet arrived at work that morning,” she said. “Had he been there, he would have ended my life by strangulation, suffocation, or simply leaving me there to die.”

Others are not so lucky. “Two CDC databases show that between the years 2003 and 2014, there were somewhere between 376 and 588 infant deaths of babies born alive,” testified Arina Grossu, the director of the Family Research Council's Center for Human Dignity.

She continued that the CDC ruled that “143 of the infant deaths could ‘definitively’ be classified as infants born alive after an attempted abortion. However, it admits that ‘it is possible that this number underestimates the total number of deaths involving induced termination [abortion,’” since they rely on abortionists to report on their own activities accurately.

“Those 143 babies ‘definitively’ born alive after an attempted abortion lived from minutes to one or more days, with 47.6 percent of the babies living between one to four hours,” Grossu said. “What kind of care, if any, were they given?”

The nation knows the fates of babies born alive to convicted mass murderer Kermit Gosnell, who reportedly snipped infants’ spinal columns with scissors “hundreds” of times. She also mentioned the case of Houston abortionist Douglas Karpen, who was accused – but never indicted – of murdering newborns outside the womb,sometimes by twisting their heads off with his bare hands.

“Infanticide is unacceptable in a civilized society, regardless of what one may think of abortion itself,” she said.

Rep. Franks introduced a bill last year – the Born Alive Abortion Survivors Protection Act – which would require abortionists see to it that newborns receive appropriate emergency medical care and would treat killing an infant the same as a first-degree murder.

Both Jessen and Rep. Franks called for action on his bill, which passed the House last September but has languished in the Senate for more than a year.

They also demanded to know where the presidential candidates stand on this issue.

“This is a bipartisan issue, and I think it's important for the American people to weigh at this hour, whether or not they wish to elect someone to the highest office in the land that favors infanticide – because that is what we are speaking of here,” Jessen said. “So, I would like to ask Mr. Trump to tell me, and you, where he specifically stands on this issue, and I ask the same of Mrs. Clinton. I would also like to ask Senator Mitch McConnell to force a vote on the Born Alive Abortion Survivors Protection Act before the end of this September.”

Even the bill’s opponents refused to speak out against it. The panel’s pro-choice witness, Kierra Johnson, who appeared to testify against the Hyde Amendment, declined to engage when Rep. Ron DeSantis of Florida asked, “What would you lose by providing the infant treatment at that point?”

Johnson responded, “I am not a medical professional. What I do know is that there are leading medical organizations that have come out in opposition to this bill.”

Existing laws, she said, “hold doctors to high standards of care in this country so, for me, I don’t understand why we would necessarily need an additional law.”

Congressman Franks emphasized that his bill had nothing to do with further restricting abortion, only providing for the safety of those newborns who survive the procedure.

“This is not abortion. This is born-alive. The American people deserve to know where the presidential candidates stand on something so intrinsic to American values,” said Rep. Trent Franks, R-AZ, who called 2016 “the most important election in this century, and the last century.”

Denying medical treatment to newborn infants “is not who we are,” he said.

“If we’re not going to defend born alive babies,” Rep. Franks said, “the light has gone out.”