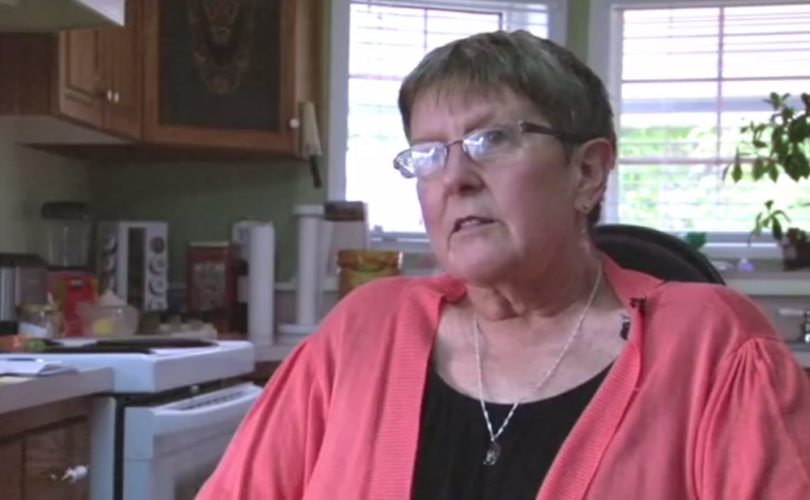 Gloria Taylor died in 2012 without assistance. But her family and other supporters are pushing her case forward.Youtube Screenshot / Dying with Dignity

Twenty one years ago Canada’s Supreme Court rejected the claim there was a right to assisted suicide. This week they are being asked to think again.

“What is at stake is that we should never put our lives in the hands of others to decide,” declares Alex Schadenberg, head of the Euthanasia Prevention Coalition, which has intervened at every stage of the case.

As before the challenge comes from a British Columbia woman. In the early 1990s it was Sue Rodriguez. This time it started with Gloria Taylor. When she died in 2012 (without assistance) the torch went to Kay Carter, who has since committed suicide, with assistance, in Switzerland.

Now it is Taylor’s family and others still living who press the case, all shepherded by the B.C. Civil Liberties Association. They won in the B.C. Supreme Court in 2012, lost in the B.C Court of Appeals, and now argue before the highest court.

The lower-court victory came from Lady Justice Lynn Smith, who found that the Supreme Court of Canada’s ruling against assisted suicide in 1993 is outdated. Smith ruled that the right to life guaranteed in the Charter includes the right to commit suicide and that refusing this right is a clear case of discrimination.

“That’s pretty ironic,” Schadenberg told LifeSiteNews. “Because protection of people with disabilities is one of the biggest reasons to oppose assisted suicide.”

Schadenberg has support from two other intervenors in this case, the Council of Canadians with Disabilities and the Canadian Association for Community Living.

The CCD speaks for seven disability groups with several hundred thousand members, and the CACL lobbies for many provincial associations of parents with disabled adult children.

“Too many people look at our members and think their lives aren’t worth living,” said the CCD’s national co-ordinator, Laurie Beachell. “Some of the people who think like that work in the health bureaucracies,” he added, “where they deny our members transplants or issue do-not-resuscitate orders without our members’ consent. Our members are already at risk and this law would put them more at risk.”

The B.C. Civil Liberties Association argues on its website that such fears “are unfounded,” based on how euthanasia and assisted suicide have been implemented in the Netherlands, Belgium, and Washington and Oregon states.

“Canadians… who suffer from terminal illnesses… deserve the peace of mind and improved quality of life that comes with knowing that should their suffering become intolerable, a peaceful and dignified physician-assisted death will be an available choice,” they argue. “We believe that where deeply personal choices regarding end of life care are involved, the patients themselves should make those decisions, not the government.”

But Schadenberg counters that health system needs instead to address fear of dying with significant improvements to end-of-life care. He believes that once this is done, popular support for assisted suicide and euthanasia revealed in polls would dwindle.

He also argued that while euthanasia advocates tend to frame their arguments in terms of terminal illness, the tendency in practice is to expand the criteria to include mental illness. “Which would you want if you saw your doctor with suicidal thoughts? Treatment for depression or a fatal injection?” he asked.

Schadenberg says that the fear of disability groups that health professionals will abuse any power they are given to euthanize or assist suicide is already being realized. One study found that 32 percent of those being euthanized in Belgium are killed “without request,” while in the Netherlands, where the official euthanasia toll increases by double digits yearly, a Lancet study indicates more than 20 percent of the actual euthanasia deaths go unreported.

These countries rely on doctors to police themselves, said Schadenberg, so “there is no protection.”