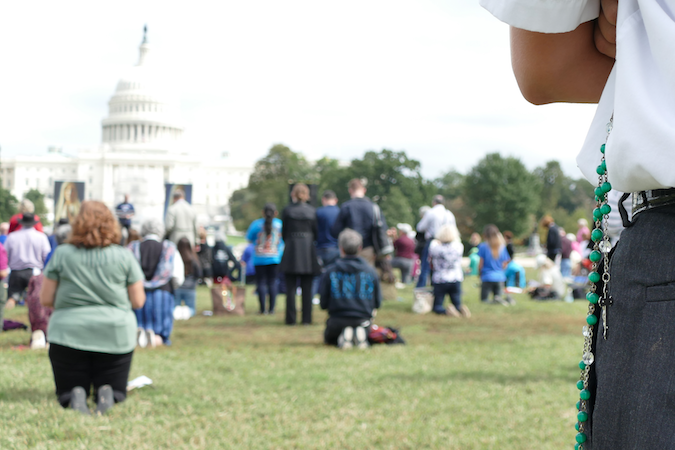 Catholics pray the rosary outside the U.S. Capitol before the 2016 presidential election.Claire Chretien / LifeSiteNews

WASHINGTON, D.C., February 17, 2017 (LifeSiteNews) – Washington, D.C. became the sixth jurisdiction in the U.S. to legalize assisted suicide on Saturday, as the Republican-controlled Congress failed to block the law.

California, Colorado, Oregon, Vermont, and Washington state previously allowed assisted suicide. Assisted suicide technically remains illegal in Montana, but doctors there may use a defense of consent if prosecuted.

After the House Oversight Committee advanced a resolution this week to overturn the District of Columbia's new assisted suicide law, the full House didn't vote on it, meaning the pro-death law went into effect.

The Home Rule Act of 1973 gives Congress power to overturn D.C. laws within a certain time frame after their passage.

On February 13, House Oversight Committee Chairman Rep. Jason Chaffetz, R-UT, held a markup of the resolution. Chaffetz and other members of Congress made strong statements against the legalization of assisted suicide in the nation's capital. The Oversight Committee voted 22-14 to cancel D.C.'s assisted suicide law; the next step in canceling it would have been a full House vote.

In order to overturn the Death with Dignity Act, the House and Senate had to vote on it by February 17. However, the resolution was not brought to the House floor for a vote.

D.C. is now “the seventh jurisdiction to authorize medical aid in dying for terminally ill people!” Jessica Grennan, National Director of Political Affairs and Advocacy for Compassion & Choices, wrote in an email to supporters. “We know that with your help we’ll be able to protect the great advances you’ve fought so hard to achieve.”

Grennan's email said it was a “victory” that the bill “stalled.”

“I'm incredibly sad that a pro-life Congress chose not to act on this issue,” Melissa Ortiz, Founder and Principal of Able Americans, told LifeSiteNews. “I am very proud of the House OGR committee that tried valiantly to move this measure to the floor. I am grateful to Senator Lankford for his work in the Senate to try to gather the votes to pass this once it reached the Senate. More could've been done and wasn't.”

The Director of the Center for Human Dignity at the Family Research Council (FRC), Arina Grossu, told LifeSiteNews the pro-life group hopes Congress will repeal it through a budget process.

“It's deeply disappointing and I hate the vulnerable feeling that I now have as a result of these measures being put in place,” said Ortiz. “This is the time to remember the things that start out as a voluntary often become mandatory.”