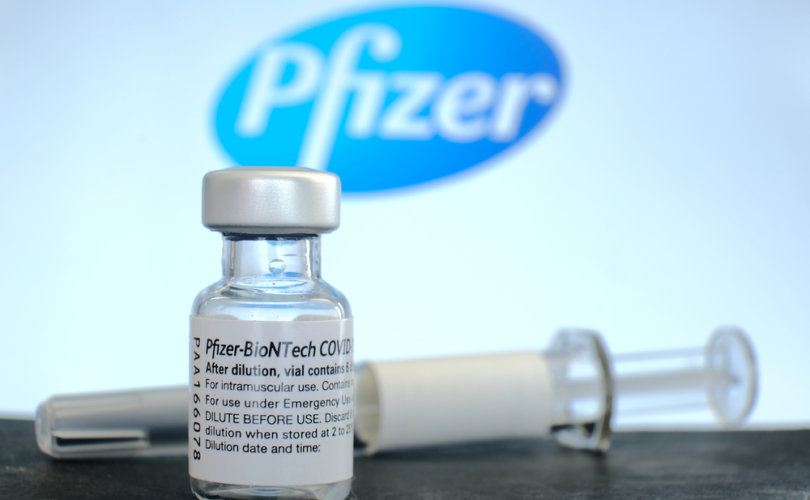 (LifeSiteNews) — The so-called fact-checkers at the Associated Press (AP) have confirmed that Pfizer never provided evidence that their COVID jabs would stop transmission of the virus, but still claim that the framing of this revelation – which included video footage from Monday of a Pfizer representative confirming this fact to the European Parliament – is “misleading” and “missing context.”

Explaining this, the AP wrote: “At the hearing, [Dutch MEP Rob] Roos asked [Pfizer president of international markets Janine] Small whether Pfizer had tested its COVID-19 vaccine for its ability to prevent transmission of the virus prior to its market release. Small answered: ‘No. We had to really move at the speed of science to really understand what is taking place in the market.'”

The AP continued: “While Roos and many others framed this as a new revelation, Pfizer never claimed that its clinical trial, upon which the vaccine was authorized for use, evaluated the shot’s effect on transmission.”

Whether Pfizer or any other vaccine manufacturer stated on the record that the jabs would stop transmission, it is clear that the intention of Roos’ line of questioning was to shed light on the disconnect between the available Pfizer data and the claims from experts worldwide on the supposed transmission-stopping power of the jabs, which often resulted in governments implementing vaccine passports, vaccine mandates and other coercive measures based on the false theory that vaccines “stop the spread” of the highly survivable coronavirus.

British liberty-advocate James Melville posted a video compilation in response to the revelations from the European Parliament, highlighting a variety of instances in which so-called experts, commentators and health officials claimed without evidence, that the injections would stop transmission.

In the video, the head of the U.S. National Institute of Allergy and Infectious Diseases Dr. Anthony Fauci, Director for the Centers for Disease Control and Prevention (CDC) Rochelle Walensky, U.S. President Joe Biden and globalist billionaire Bill Gates, can all be seen making the claim despite the complete lack of any supporting data from Pfizer.

In contrast, LifeSiteNews reported in January of 2021 – and numerous other times since then – that there was no evidence that the experimental jabs would stop transmission.

Citing medical research, LifeSite’s Patrick Delaney wrote: “…there is no data on whether or not these experimental agents are actually capable of stopping the transmission of the virus.”

Delaney also cited Dr. Simone Gold who stated: “What is super shocking is that there is no proof that this biological agent actually stops the transmission among people.  It’s like a joke, this is like the punch line to a joke, ‘let’s take a vaccine, and by the way it doesn’t actually stop transmission.’ I mean, I don’t even know what to say to that!”

Despite this lack of evidence, vaccine passports were implemented in Europe and around the world under the pretense that the jabs would stop transmission, and that the unvaccinated posed a threat to the public.

READ: Frontline Doctors: Experimental vaccines are ‘not safer’ than COVID-19

Justin Trudeau: “If you don’t want to get vaccinated, that’s your choice. But don’t think you can get on a plane or a train beside vaccinated people and put them at risk.” 🤡pic.twitter.com/f8xrv7abeS

Pfizer’s admission in European Parliament seems to have motivated politicians in other countries to question the treatment of the vaccine-free as well, with Canadian Conservative MP Leslyn Lewis writing on Twitter: “We need an inquiry. Politicians and health experts promised Canadians that the vax would prevent transmission. Pfizer admits it never tested for that. It’s executives sat in silence while trusted officials gave incorrect info to the public. That’s just wrong.”