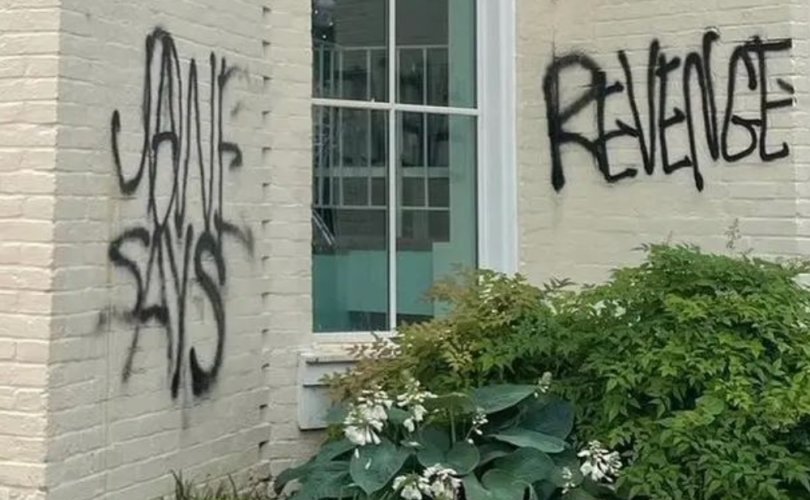 (LifeSiteNews) – The Associated Press (AP) ran an article Wednesday that warned of a potential uptick in anti-abortion violence in the wake of the Supreme Court’s ruling in Dobbs v. Jackson Women’s Health, yet fails to mention the intimidation and violence perpetrated by Jane’s Revenge, a pro-abortion group that has taken responsibility for several attacks on pro-life pregnancy centers and churches.

The article, “Heightened alert: Abortion providers brace for ruling,” states that abortion providers should expect an increase of “protests, harassment, and other violence,” especially “in states where abortion remains legal.”

The article notes several instances of violence by pro-life supporters directed against abortion, including an alleged protest that took place outside of a New Jersey abortion clinic, the 1993 shooting of abortionist David Gunn at a Pensacola abortion clinic, and the shooting of three people at a Planned Parenthood in Colorado in 2015.

Last month, the Department of Homeland Security (DHS) issued a warning that violence perpetrated by pro-abortion extremists could escalate in the wake of the Court’s ruling, reacting to threats to “storm the Supreme Court building” and “murder the Justices.” DHS also issued a warning to Catholic bishops that both Church property and clergy could face danger in light of the ruling. Earlier this month, DHS warned of potential terrorism committed by both pro-abortion and pro-life protesters in the wake of the Dobbs decision.

“We promised to take increasingly drastic measures against oppressive infrastructures. Rest assured that we will, and those measures may not come in the form of something so easily cleaned up as fire and graffiti,” read the letter.

“From here forward, any anti-choice group who closes their doors, and stops operating will no longer be a target. But until you do, it’s open season, and we know where your operations are. The infrastructure of the enslavers will not survive.”

Protests outside of Supreme Court Justices’ homes have also been allowed to continue, contrary to federal law. Early this month a man was arrested for the attempted assassination of Justice Brett Kavanaugh. The man, Nicholas John Roske, was carrying pepper spray, ammunition, duct tape, zip ties, and a knife. Roske said that he attempted to kill Kavanaugh because of the potential overturn of Roe.

Speaking to Fox News, Republican Senator John Kennedy of Louisiana said that the violence was designed to intimidate the justices to side with the pro-abortion extremists.