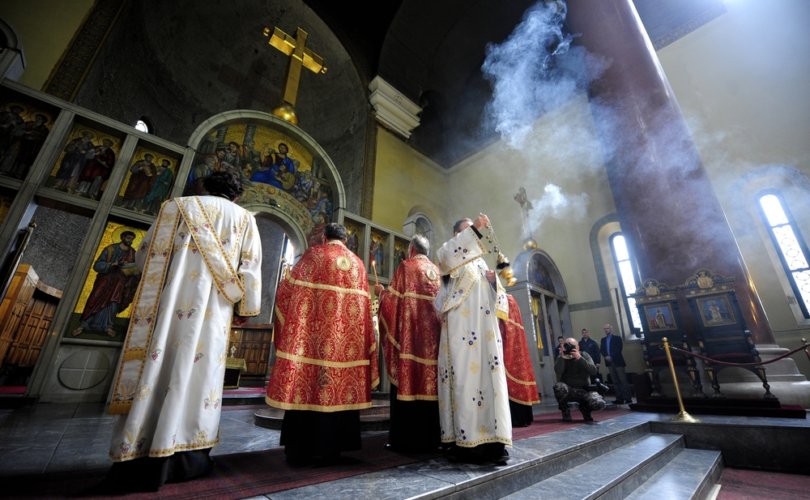 MOSCOW, April 27, 2016 (LifeSiteNews) — To celebrate the holiest holiday of the year this Sunday, the Russian Orthodox Church plans to circulate a petition calling for a ban on abortions in the nation.

The pro-life Easter petition drive is expected to garner more than one million signatures in Russia.

With Orthodox Easter, also known as Pascha, approaching, millions of believers — many for the only time this year — will be packing Russia's churches, celebrating the resurrection of Jesus Christ.  Church officials are using that opportunity to push for a ban on abortion in the country.

The For Life Movement is promoting the petition drive, with the blessing of Starets IIiy Nozdrin, the Father Confessor of Patriarch Kirill of Moscow and All Russia.

The elder told Interfax news agency that with 200,000 signatures already, the “objective is to collect a million signatures.”

The atheistic Soviet Union was the first country to legalize abortion in 1920.  After the death of Joseph Stalin, who banned abortions, the number of abortions in the communist country skyrocketed.  During 70 years of imposed atheism, abortion increasingly became the preferred method of birth control.

Today, Russia still has one of the highest abortion rates of any nation in the world, with nearly two million (1,947,301) babies killed in 2014 alone.  As a result, the population is dwindling, falling by 12 million people in 16 years.

UN figures predict Russia will lose one-fifth of its population by 2050.

Two years ago, Russian officials passed measures encouraging larger families, such as the “Maternal Capital” program, which gives a one-time subsidy for parents who have more than one child.

Orthodox Christians believe that God creates a person in His image at conception, as Christianity has believed from its beginning.  The official position from the Moscow Patriarchate states that, “since the ancient time the Church has viewed deliberate abortion as a grave sin. The canons equate abortion with murder. This assessment is based on the conviction that the conception of a human being is a gift of God.”

“Therefore, from the moment of conception any encroachment on the life of a future human being is criminal.”

Orthodox Christians, who are part of the world's second-largest church, celebrate Easter at a different time than Western Christians due to differences in the calendars adopted by the Orthodox Church versus the West in the sixteenth century.