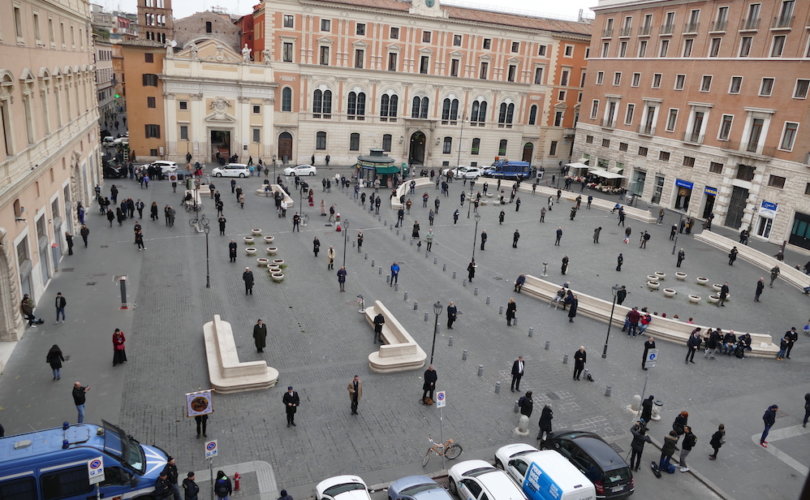 ROME, February 19, 2019 (LifeSiteNews) — Assembling amid banners of the four evangelists and in the holy name of Mary, today an international coalition of 100 Catholic laity mobilized in Rome’s historic center to silently “oppose the Vatican’s policy of silence about homosexuality,” ahead of this week’s Vatican summit on clerical sex abuse.

Under Our Lady’s mantle, members of the Church militant — men and women, young and old — deployed in Rome’s Piazza San Silvestro, where they silently assembled in a formation of 10 by 10.

The event — the first of its kind in the historic center of Rome — took place on the eve of a Vatican summit with Pope Francis and 113 presidents of bishops’ conferences from around the world, that opens on Thursday, Feb. 21.

“It is an historic opportunity to address not only the issue of sexual abuse of minors, but also the theme of moral corruption, which includes any violation of divine and natural law, starting with homosexuality,” organizers of the public demonstration said.

“The event is intended to be a public profession of the Catholic faith and an attempt to break down, through the weapon of silence, the wall of silence of the Pastors of the Church in the face of an unprecedented doctrinal and moral crisis.”

Italian police were on hand to provide security at the event.

At the conclusion of the Acies ordinata silent demonstration, the majority of participants made their way to the Church of San Sylvester located in the square to continue in silent adoration and supplication for the Church in the presence of the Most Blessed Sacrament.

At the same time, organizers of the Acies ordinata held a two-hour press conference at the foreign press office in historic Rome where they delivered interventions on issues surrounding the upcoming summit and fielded questions from the international media.

In a statement sent to LifeSite ahead of today’s event, organizers and participants said their silence is meant to “break down the wall of silence.”

“We are lay Catholics, hailing from all over Italy and from every part of the world. We are participating in this event on a personal basis, or on behalf of associations and journalistic agencies united by love for the Church, her doctrine and her institutions.”

“We are gathered for this event under the name of Acies ordinata, a title which the tradition of the Church reserves for Mary Most Holy, who gathers the army of her faithful and defeats her enemies: terribilis ut castrorum acies ordinata (Song of Songs, 6:3; 6:9-10).”

“Children of the Church militant, we are here to publicly profess our Catholic faith, but also to break the wall of silence. The grave silence of the Pastors of the Church in the face of an unprecedented doctrinal and moral crisis.”

“The Church of San Silvestro in Capite, in this square, contains the relic of the head of St. John the Baptist. The forerunner of the Messiah was reduced to silence by Herod, but his mute tongue continues to speak to our hearts. We are standing, in a respectful and orderly manner, to symbolically express the resistance of those who remain unbending before the silence.”

“We have the Holy Rosary in our hands and we are reading texts of the Catholic Tradition, that we might fuel our endurance in prayer and study, convinced that it is only in recollection that we suitably prepare for action.”

“Ours is an appeal to Bishops who are silent, that someone among them may have the courage to break the silence. Will there be a Shepherd who dares to tell the truth to the Holy Father?”

“The Church does not fear the Truth, because the Church proclaims to the world the Truth of her Head and Founder, Jesus Christ. It is above all to Him that we turn with this symbolic act, so that in these calamitous times, he may come to the aid of our weakness and with one Word, save His Church.”