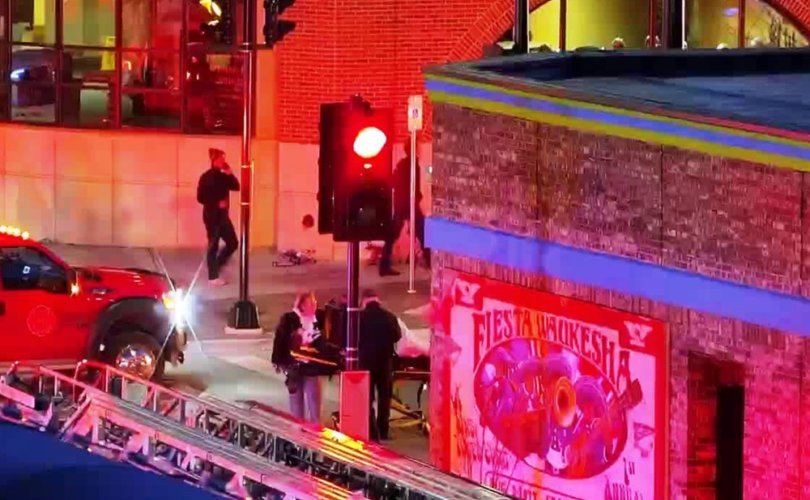 WAUKESHA, Wisconsin (LifeSiteNews) — At least five people have been killed and more than 40 injured after an individual driving a red Ford Escape plowed through a Wisconsin Christmas parade Sunday night, killing and injuring dozens, including children and a Catholic priest of the Archdiocese of Milwaukee.

“At this time, we can confirm that 5 people are deceased and over 40 are injured,” a spokesperson for the city of Waukesha stated in a Twitter post late Sunday night. “However, these numbers may change as we collect additional information. Many people have self-transported to area hospitals. The Police Department has the person of interest in custody.”

“The scene is still fluid, and the investigation is ongoing. The community mourns the loss of our community members and those injured. We are asking for the community to come together during this time and to keep the families in your prayers,” the city’s representative added.

At this time, we can confirm that 5 people are deceased and over 40 are injured. However, these numbers may change as we collect additional information. Many people have self-transported to area hospitals. The Police Department has the person of interest in custody.

“Among the injured are one of our Catholic priests, as well as multiple parishioners and Waukesha Catholic school children,” the Archdiocese of Milwaukee said in a statement. “Please join us in prayer for all those involved, their families, and those who are traumatized from witnessing the horrible scene.”

The motive behind the mass casualty incident has not yet been identified.

“Today our community faced horror and tragedy in what should have been a community celebration,” said Waukesha Mayor Shawn Reilly in response to the news. “I’m deeply saddened to know that so many in our community went to a parade but ended up dealing with injury and heartache.”

Police had issued a “shelter in place” warning immediately after the incident, in which at least a dozen children were among those transported to the hospital.

In a statement issued late Sunday, the Waukesha School District announced area schools would be closed Monday in response to the attack.

The person of interest currently being questioned by police in connection with the deadly incident has been identified as 39-year-old aspiring rapper Darrell E. Brooks, a registered sex offender with a long criminal history dating back to 1999.

At the time of his arrest in connection with the mass casualty event in Waukesha, Brooks was already facing multiple misdemeanor and felony charges for prior offenses including felony bail-jumping, domestic abuse, and resisting or obstructing an officer, for which he was out on $1000 bail.

According to screenshots obtained by fact-finding site Heavy.com, Brooks had a history of posting anti-police content on social media, as well as content supporting Black Lives Matter and Black Nationalist rhetoric.

Brooks also appeared in a rap video which has now gone viral, in which he posed alongside a red Ford Escape identical to the one used in the mass killing.

Most of Brooks’ social media posts have now been scrubbed from the internet, saved only by users who managed to capture them before they were deleted.

It is unclear whether the deadly event was in any way connected to the Kyle Rittenhouse case, in which a teen was found not guilty of intentional homicide after he shot three protesters, killing two, during a Black Lives Matter riot in Kenosha, Wisconsin, a city about an hour away from Waukesha.

The trial had been widely politicized and Rittenhouse smeared by legacy media members and U.S. President Joe Biden as a white supremacist.

Brooks had posted about the Rittenhouse verdict on social media, stating that he was not surprised Rittenhouse had been found not guilty.

Authorities have said that Brooks may have been fleeing another crime scene at the time he rammed his vehicle into dozens of parade participants.

In 2016, a Tunisian man drove a truck into Berlin’s Christmas market, killing 13 people and injuring 48. ISIS took credit for the attack.