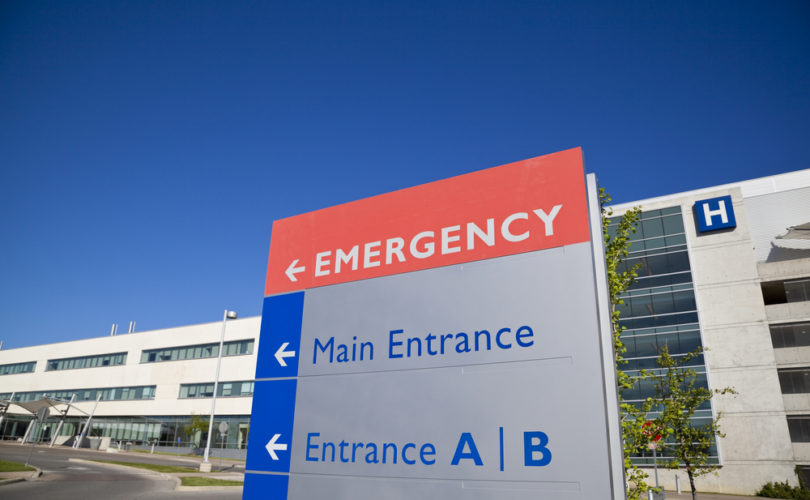 A new study has found that six percent of women who had abortions in 2009 and 2010 were forced to visit an emergency room within six weeks of their abortion.

However, a public policy expert told LifeSiteNews that the study's results ignored the long-term effects of abortion on women, and did not account for when a previous abortion was the unspoken reason for a medical visit.

Using 2009-2010 data from the California Medicaid (Medi-Cal) fee-for-service program, the report's seven co-authors found that 54,911 abortions were done under the program to 50,273 women. One in sixteen women went to the emergency rooms within six weeks of having an abortion, and of that number, 40.5 percent said that their reason for visiting an emergency room was related to the abortion.

The total complication rate of abortions was found to be 2.1 percent, however – including 5.2 percent from medication abortions. According to University of Michigan-Deering professor Dr. Michael New, this shows that “pro-lifers’ efforts to stop telemed abortions are very sound health policy.”

Tele-med abortions are a relatively new phenomenon for abortionists. It involves a doctor instructing a nurse on how to conduct an abortion while not on-site. The state of Iowa has seen a major legal battle over the issue.

The study says that 1 out of 115 women needed treatment, a diagnosis, or both at the emergency room. The complication rate was “much lower” than that of women who are in child birth, as well, within the six-week limit of the study.

Additionally, they could not determine exact gestational periods, which is relevant given the established links between gestational age and complications.

A strength of the study, say the authors, is that the complication rate may be higher than the norm for all Americans because “presumably higher rates of low-income women” are using the government program. “MediCal beneficiaries may have more health problems than the general population, and given that the sample had insurance coverage, they may differ from women whose follow-up care is self-pay. These differences would mean that the reported complication rate is overestimated,” say the authors.

The authors called the 6.4 percent emergency room visit percentage “a high rate,” and said that abortion complications were greater at hospitals and physician offices, rather than at non-outpatient clinics. The rate of major complications was 2.1 percent.

According to lead author Dr. Ushma Upadhyay, Assistant Professor at the University of California's San Francisco Bixby Center for Global Reproductive Health, the emergency room visit percentage was “high relative to what we were expecting to find and relative to the proportion of abortions that resulted in a complication.”

Upadhyay also told LifeSiteNews that “we did not compare the rate of post-abortion emergency room visits to visits for other procedures, although that is a good idea for a future study.” She said that “the major complication rate for hospital deliveries is 1.3 percent, compared to the major complication rate for abortion, .23 percent.” Citing a 2009 study, she noted that “almost 29 percent of hospital deliveries involve at least one obstetric complication, including both major and minor.”

When asked about the post-abortion length of the study, Upadhyay said that “we wanted to take as conservative an approach as possible, to ensure we included any possible complication that may have arisen as a result of the abortion.”

“When we graph the incidence of complications against time, we find that the vast majority of complications are diagnosed and treated well before the 6-week mark, which suggests that this is an appropriate cut-off for follow-up,” she said.

New, however, disagreed. He told LifeSiteNews that “six weeks is a relatively short time span. Many of the health risks involved with an abortion (higher risk of breast cancer, psychological problems) do not appear [until] months or even years later.”

New also said that the study's conclusion that one in sixteen women had to go to the emergency room after having an abortion could understate reality. “There is a good chance that some women who sought emergency room care did not reveal their abortion,” he noted, saying that “sometimes doctors are reluctant to cite abortion as a cause of injury or death,” and that “abortion facilities often refer women to doctors who will cover their tracks.”

Upadhyay said the study's use of billing codes accounted for potential dishonesty or omissions. “Our clinical reviewers examined all of the related billing diagnosis and procedure codes to make a determination of whether it was related to the abortion.  Abortion complications were determined based on the specific constellation of billing codes.”

“For example,” she said, “if the visit had an ICD-9 diagnosis code indicating abdominal pain and bleeding, along with procedure codes indicating diagnostic procedures (such as a pregnancy test or ultrasound) along with a medication like methergine, it was considered an abortion-related complication, even if there was no specific abortion complication diagnosis code. So even if the treating physician did not determine the visit to be related to the induced abortion, or did not even know that the woman recently an abortion, the incident would still be considered abortion-related.”

In the study, the authors say that “these new data can inform policy debates regarding abortion regulation in the United States,” and stood in opposition to pro-life laws at the state level.

“State legislatures have passed regulations such as ambulatory surgical center requirements (23 states), transfer agreement laws (eight states), and hospital admitting privileges requirements (13 states), 26 with the stated intent to increase safety. Given that in practice their ultimate effect often is the closure of abortion facilities, there is a need to consider the public health effect of these policies, weighing any theoretical incremental reduction in patient risk that may occur against any increases in risk that may occur with reduced access to abortion care.”

Co-author Sheila Desai's work likewise has “focused on improving access to reproductive and maternal health care through community-based and community-run interventions.” She has also worked in “public health programs” across several of the world's regions, and spent three years in India “to strengthen national and community-level maternal and productive health programs.”

Co-author Vera Zlidar works for USAID, according to her LinkedIn Page, and previously was the “Family Planning Advisor” for the “Europe and Eurasia Regional Family Planning Activity” arm of the consulting group John Snow, Inc. She also worked with Upadhyay on a 2007 handbook that her LinkedIn page describes as “the fourth World Health Organization cornerstone of evidence-based family planning guidance,” and which “offers the latest guidance on providing contraceptive methods.”

Tracy Weitz, another co-author, is well-known for her abortion advocacy. In addition to heading up a UC-San Francisco department that focuses on “reproductive health,” she was a leading figure in the creation of a law that allows non-doctors in California to perform abortions. On January 1, 2014, she became the Director of Domestic Programs for the pro-abortion and pro-contraception Buffett Foundation.

Patricia Anderson likewise works for the same pro-abortion department that Weitz heads, and Doctors Diana Taylor and Daniel Grossman both work with Upadhyay in the Bixby Center. Taylor is Professor Emeritus at the university's School of Nursing, while Grossman is an Assistant Clinical Professor at the school's Department of Obstetrics, Gynecology, and Reproductive Health.

New said the study's results bear watching. “Some may say that percentage is low compared to other kinds of surgeries, but keep in mind most surgeries are performed on older people who are in relatively poor health. Abortions are performed on young women who are usually in good health,” said the associate scholar for the Charlotte Lozier Institute.

Correction: This article originally stated that the study found the total complication rate of abortions was 10.1 percent, but in fact it was 2.1 percent.