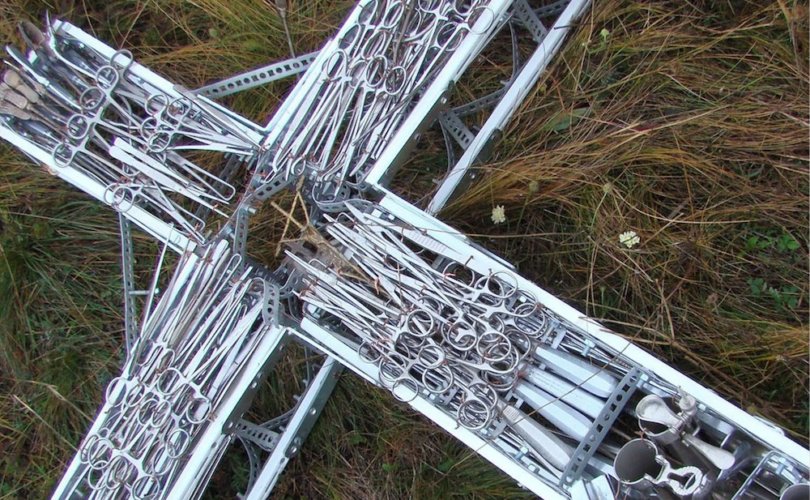 BUDAPEST, Hungary, August 3, 2016 (LifeSiteNews) — Hundreds of people from across Europe met at Capistrano Square and marched through the heart of this ancient city tolling bells for those slain by abortion while stopping along the way to display images of an unusual cross made entirely of abortion instruments.

The Belgrade March for Life was held July 23, the day after the 560th anniversary of the end of the Siege of Belgrade and the defeat of Turkish invaders. The conference held in conjunction with the march was framed in martial terms as “the War of Cradles” and held at the city’s military museum.

Marchers from 20 countries constantly rang a bell as they proceeded through the city, taking turns reciting the names of unborn children slain by abortion in their native tongues, according to event organizer Imre Teglasy, director of Human Life International Hungary, a Hungarian language professor, and abortion survivor.

Fifteen times they stopped, for each of the Stations of the Cross that mark the events of Christ’s passion starting with his death sentence and ending with his Resurrection. At each stop, they said together prayers composed by Dr. Zita Kovacs, a Romanian pro-life leader, and inscribed on stone tablets that are part of a permanent pro-life display there.

But at the heart of the march were a series of photographs of a monstrous cross, “the Cross of Sins,” created six years ago by an Austrian, Dr. Josef Presslmayer, entirely out of abortion instruments abandoned by staff at two abortion clinics in that country closed after pro-life vigils.

The cross has been displayed at Fatima and was used at other protests and marches in Austria, and also in Hungary against the introduction of RU486 there. “The protest was successful,” Teglasy said, ”so there is no chemical warfare by RU486 in Hungary now.”

But the cross is now considered too fragile, Teglasy told LifeSite News, to travel and remains in Dr. Presslmayer’s home, where it serves as a pro-life shrine linking the suffering of Christ with unborn children.

Because he ordered the different pictures of the cross taken, Teglasyalso had a hand in the Budapest display along with Presslmayer and Kovacs, but quickly added that it is really the Holy Spirit who is responsible for the “15 stations symbolising the torture and death of our Lord, Jesus Christ calling attention to the torture and death of our children before birth.”