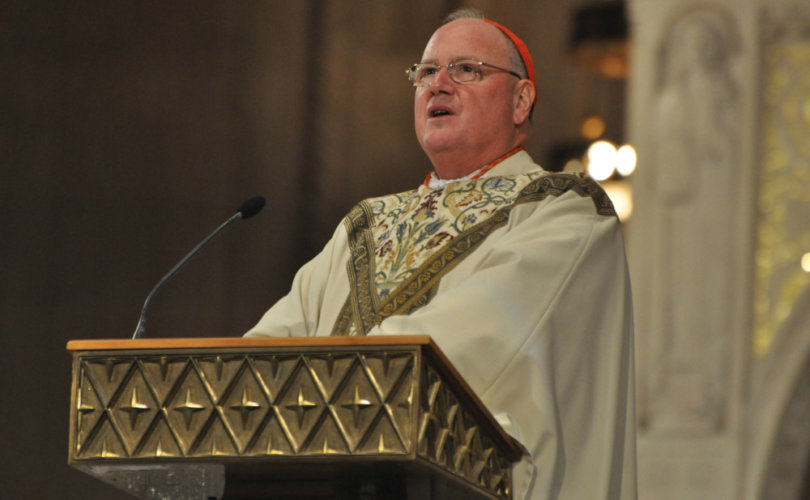 The chairman of the United States Conference of Catholic Bishops’ Committee of Pro-Life Activities told pro-life pilgrims Thursday night in his homily, “I know that God is with us,” and called upon them to see the face of Christ in every person.

Celebrated at the Basilica of the National Shrine of the Immaculate Conception each year in commemoration of the anniversary of Roe v. Wade, the crowd this year numbered around 9,000, Shrine administration told LifeSiteNews.

Numbers for the Mass have reached as high as 20,000, but an impending winter storm kept many home from the nation’s capitol for the March this year.

Everyone at the Mass came, Cardinal Dolan said, “Trusting that Jesus will cure us and our nation from the unclean spirit that never ceases to tempt us to treat the human person with less than the dignity he or she deserves, or human life with anything but the reverence and tenderness that God intends.”

Cardinal Dolan recounted the story of a mother who left her newborn baby boy in the Nativity scene of Holy Child Jesus Church in Queens this past Advent, saying what occurred there was Exhibit A for promoting the culture of life.

He called on every parish, pastor and congregation in the U.S. to be like those at Holy Child Jesus Parish, some of whom offered to adopt the infant, because, the cardinal said, the child’s mother felt welcome at the church and knew her child would be safe there.

“In a world that so often sadly says, ‘Sorry, no room at the inn’ to those in need,” Cardinal Dolan said, “she found a manger, a sanctuary, in her church.”

He then recalled a recent visit by Pope Francis to Grecchio, Italy where the first Nativity scene was set up by St. Francis, telling a group of youth on pilgrimage there, “Just as we see God when we gaze upon that holy infant in the crib, so do we see the divine in the smallest and most vulnerable around us now.”

The cardinal also recounted how when Pope Francis visited St. Patrick’s Cathedral in New York for Mass during his U.S. visit last fall, the Holy Father stopped during the opening procession to greet all sorts of different people, who each exemplified vulnerable life.

He told the pro-life crowd that he could make a bet on who the pope would stop to greet; the newborn baby in its mother’s arms, the obviously pregnant woman, the little girl, bald from chemotherapy, the elderly man bent over with Parkinson’s and arthritis, the policeman on a mobile bed, paralyzed from a bullet taken in the line of duty, the little boy twisted with cerebral palsy.

“And sure enough, he stopped to embrace them all,” Cardinal Dolan said. “My brother and sister apostles in the culture of life we need that interior radar – the eyes, and the heart, and the hands of Jesus, of Pope Francis, to detect those at the side of the road.”

“Especially,” he continued, “especially the tiniest, and most fragile – the baby in the womb.”

Invoking the Mass’ reading where Jonathon converted his father King Saul from a fixed pursuit to kill David, Cardinal Dolan told the pro-life pilgrims they were called to convert others to life.

“We’re summoned to be such agents of conversion,” he said.

“Yes, we do it by reasoned and compelling argument. Yes, we do it by our advocacy. You bet we do it in law and political action. And don’t forget, so obvious tonight, we do it by prayer and fasting,” stated Cardinal Dolan. “But we most successfully accomplish this conversion from the culture of death to the culture of life, from the throwaway culture to a culture of tenderness and mercy, by imitating those priests and parishioners at Holy Child Jesus Parish in New York City, by acknowledging that little Jose, that abandoned newborn baby, was nowhere more at home than in the empty manger of their parish Nativity scene, because he too is a child of God.”

He went on to give the example of Blessed Mother Teresa, when questioned how she could hug, kiss, and bathe the impoverished and abandoned people she ministered to, and replied, “Because I see in them the face of Jesus.”

“In the tiny baby, born or pre-born, we see the infant Jesus,” said Cardinal Dolan. “In that child’s mother, especially when confused and scared and hopeless, we see Mary, at the crib of Bethlehem.”

Last week to commemorate the Roe v. Wade anniversary, Cardinal Dolan, in his role of chair of the Bishops’ Pro-Life Committee, wrote a letter that criticized the “extreme ideology” of Barack Obama and other Democrat leaders for opposing conscience-protection measures in regard to abortion.

“Even as Americans remain troubled by abortion, a powerful and well-financed lobby increasingly insists that there is no real issue here – that abortion is just another part of ‘basic health care’ for women, to be seamlessly integrated into our health system and our lives,” he wrote.

The cardinal said further, “We see this in the rising opposition of some political leaders to the very notion of a right of conscience on abortion.”

Cardinal Dolan has at times at times been at odds with Catholic and pro-life activists. He faced strong criticism, for example, by giving a platform to Barack Obama at a high-profile Catholic Charities fundraising dinner right before the 2012 election. In 2013, he was criticized for agreeing to serve as grand marshal for New York’s St. Patrick’s Parade despite organizers’ decision to welcome a homosexual activist for the first time, while continuing to ban pro-life groups.

At the same time, he has also been a defender of Catholic tradition, in particular at the Synod on the Family when he was one of 13 cardinals who signed a letter to Pope Francis expressing concern over the direction it was taking. He warned, in fact, that faithful Catholics were becoming the new minority, and that the Church should not shut them out.