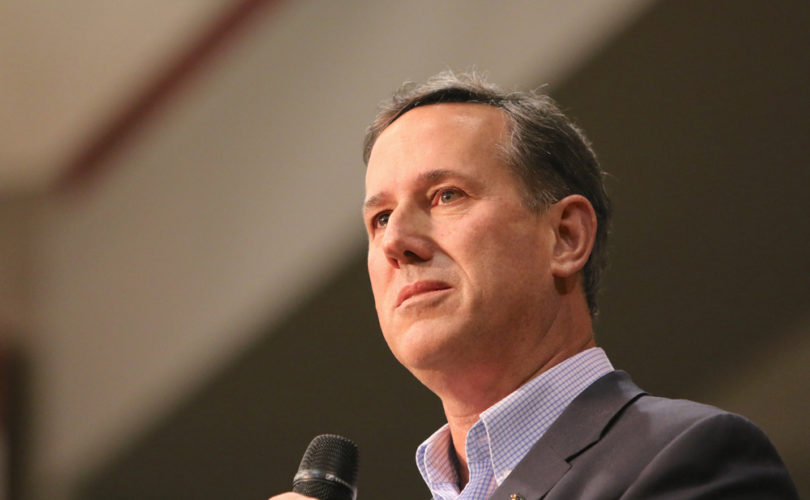 NORTH CHARLESTON, South Carolina, January 15, 2016 (LifeSiteNews) – Americans are allowing a generation of at-risk children to lose their chance at the American dream, because we are “too politically correct” to say that the intact, traditional family is best for society, Rick Santorum said at last night's Republican presidential debate.

Moderator Trish Regan asked Santorum about the role “family formation” plays in economic development. Currently, 40 percent of all children are born out-of-wedlock. “That's twice as high as reported back in 1980, and it's 11 times as high as in 1940,” she said.

The former Pennsylvania senator said he has been surprised to direct his audiences to “a book written by a liberal Harvard” social science professor: Robert Putnam's Our Kids.

“He wrote this book, I think, ostensibly to support the Democratic argument that the middle of America's hollowing out, and income gap is widening, and rich are getting richer,” Santorum said.

But when Putnam “studied all the information…he realized that the biggest reason that we're seeing the hollowing out of the middle of America is the breakdown of the American family.”

“The reality is that if you're…a child of a single parent, and you grew up in a single parent family neighborhood…the chance of you ever, ever reaching the top 20 percent of income earners is three percent in America.”

“That's not good enough,” Santorum said passionately. “And we have been too politically correct in this country, because we don't want to offend anybody, to fight for the lives of our children,” he concluded to applause.

A wealth of social data support his conclusion that being reared by both parents greatly increases the chances of success.

Growing up with both parents “is strongly associated with more education, work, and income among today’s young men and women,” a study conducted in October 2014 by W. Bradford Wilcox and Robert I. Lerman for the American Enterprise Institute concluded.

The two found the benefits trickle down through the generations. Being raised in an intact family “increases your odds of becoming highly educated, which in turn leads to higher odds of being married as an adult. Both the added education and marriage result in higher income levels,” they found.

“Indeed, men and women who were raised with both parents present and then go on to marry enjoy an especially high income as adults,” they wrote.

They found the “premium” of education and increased lifetime economic earnings applies to all ethnicities, as well.

Torre wrote, “Of the more than $450 billion spent on means-tested welfare for low-income families with children, roughly three-quarters goes to households led by single parents.” A 2008 study found family breakdown cost taxpayers $112 billion a year, the equivalent of the GDP of New Zealand.

“The substitutes to the family are expensive and ineffective, and taxpayers end up paying the price,” said Dr. Jennifer Roback Morse of The Ruth Institute during a lecture at Acton University.

Not everyone would be happy to see traditional families flourish. NARAL Pro-Choice America tweeted:

Rick Santorum said, “we’re too politically correct to fight for the lives of our children” & called for 2 parent-families. #GOPDebate #OwnIt

National Right to Life revealed that 85 percent of all abortions are performed on single women in its third annual “State of Abortion in the United States” report, which was released on Thursday.

The flagging fortunes of the family is an issue close to Santorum's heart. He raised the theme himself during the last Fox Business debate in November and introduced the notion to Mitt Romney in the 2012 campaign.

In addition to Putnam, AEI scholar Charles Murray came to similar conclusions about the importance of the intact family for social and economic advancement in his 2012 book, Coming Apart.

Wilcox and Nicholas Wolfinger will explore the theme further in their forthcoming book, Soul Mates: Religion, Sex, Love and Marriage Among African Americans and Latinos.