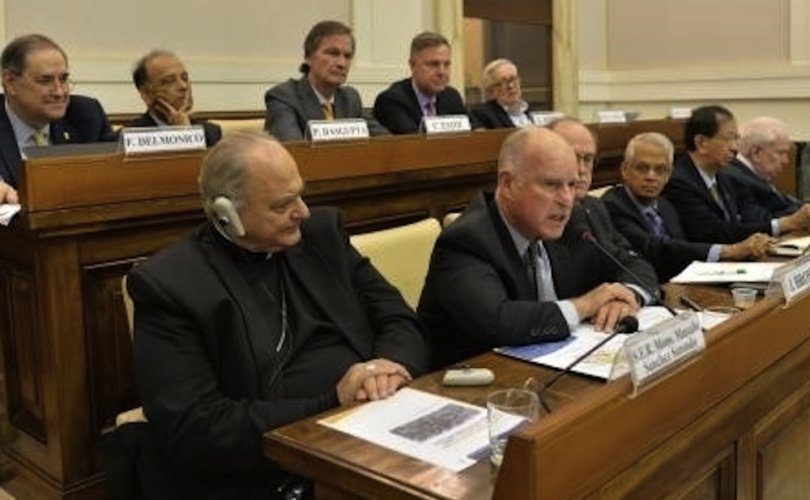 “At the highest circles, people still don’t get it,” Brown said. “It’s not just a light rinse” that’s required. “We need a total, I might say, ‘brainwashing.’

“We need to wash our brains out and see a very different kind of world.”

Brown talked for more than 40 minutes at the Vatican climate conference on November 4, The Sacramento Bee reported. The Vatican event was an early stop for the governor on a two-week climate talks tour across Europe.

The liberal Democrat also spoke negatively of President Donald Trump in terms of Trump being on board with the climate change agenda, telling the conference, “The Trump factor is very small, very small indeed,” as compared with the commitment to the climate movement elsewhere in the world.

“That’s nothing to cheer about,” he said in response to the clapping, “because if it was only Trump that was a problem, we’d have it solved. But that’s not our only problem.”

“The problem … is us,” said Brown, a Catholic. “It’s our whole way of life. It’s our comfort … It’s the greed. It’s the indulgence. It’s the pattern. And it’s the inertia.”

Brown’s appearance was part of the Vatican-conducted “Health of People, Health of Planet and Our Responsibility: Climate Change, Air Pollution and Health” conference.

The climate event was hosted November 2-4 by the Pontifical Academy of Sciences and featured a collection of proponents of various troubling ideologies, such as one world government, population control, and abortion.

The Vatican, in particular the PAS, has convened conferences on the contested concept of man-made climate change in recent years. That has led to concern over the Vatican teaming with the left on prudential matters and also its collaboration with climate activists who frequently view humans as an obstacle to climate protection and thus support population control and abortion.

Brown told the Vatican gathering that the path to change should include mass mobilization of the religious and theological sphere but also the prophetic sphere.

“The power here is prophecy,” he said. “The power here is faith, and that’s what this organization is supposed to be about. So let’s be about it and combine with the technical and the scientific and the political.”

Society can’t just rely on science and technology to combat climate change, Brown said in his talk, and must begin to accept the need for more transformational approaches — thus his stating that brainwashing was needed to advance action on climate change.

Brown shared some of his experience in Jesuit seminary during the 1950s to underscore his call for transformation on climate for the climate conference’s attendees, recounting his having spoken Latin, meditating, undergoing self-discipline, and mortifying himself.

However, he said these things did not succeed in transforming him and that he retained some of his bad habits from that time.

“We tried real hard,” he said, “and I can tell I did not achieve perfection. I was not transformed. In fact, some of my bad habits, which I will not reveal, are the same as they were … when I came into Jesuit seminary when Pius XII was pope.”

Brown’s tenure as governor of California has been rife with lawmaking in conflict with Catholic Church teaching.

He recently signed a law allowing a third gender-neutral option for birth certificates and driver’s licenses for California individuals wishing to identify as neither male nor female.

In 2014, he signed a law that removed the words “husband” and “wife” from the state’s family code and replaced them with the gender-neutral “spouse.”

In 2015, he signed a law legalizing physician-assisted suicide and a bill targeting crisis pregnancy centers.