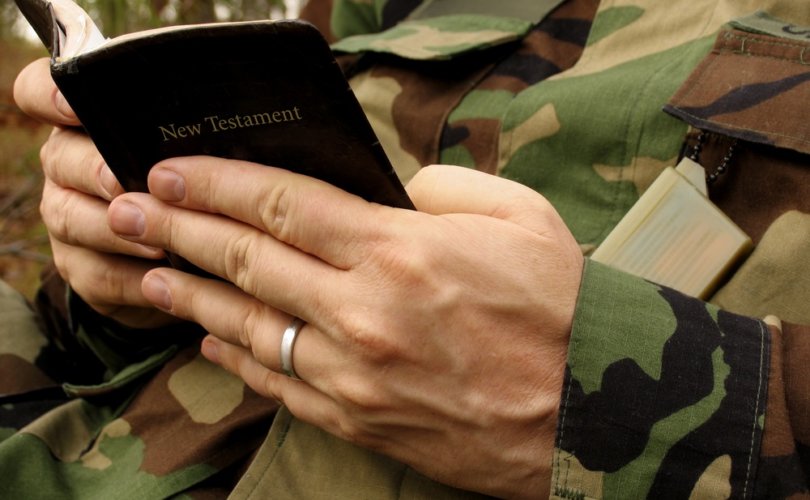 CHEYENNE, Wyoming, July 23, 2018 (LifeSiteNews) — An atheist military group is celebrating after it successfully pressured an Air Force base in Wyoming to remove the Bible from a dining table acknowledging missing or imprisoned soldiers.

As the National League of POW/MIA Families explains, the Missing Man Table recognizes soldiers absent from a dining hall because they are prisoners of war or otherwise missing in action. Every element serves a symbolic purpose, from the table’s round shape symbolizing “everlasting concern” to a Bible representing “strength gained through faith to sustain us and those lost from our country, founded as one nation under God.”

Despite this meaning and tradition, the Military Religious Freedom Foundation (MRFF) claims that 31 active-duty airmen stationed at F.E. Warren Air Force Base, 19 of whom were “practicing Protestants or Roman Catholics” and the remainder belonging to various other faiths or no faith, contacted them in May to express opposition to the Bible at their dining hall’s Missing Man Table (MRFF claims the number of objectors rose to 36 a month later).

“Our chaplains are purchasing a generic ‘book of faith’ on Thursday and will let me know when that book is expected to arrive,” Huser replied, according to MRFF. “Until it arrives, I’ve asked them to rotate the book placed on the table (rotate it through various faiths). Yesterday they placed the Book of Mormon on the table.”

“Thank you again for taking care of our Airmen,” she continued. “One of my focus areas is increasing a sense of belonging for all our Airmen a large part of that effort is ensuring that the religious and non-religious feel included and cared for.”

As for this “book of faith,” Huser told conservative radio host Todd Starnes that it will consist of “spiritual writings and prayers from the five DoD Chaplain appointed faith groups and a sixth set of blank pages to represent those who find solace by other means.”

“So she’s going to include a bunch of blank pages for those who find solace in — nothing,” Starnes reacted.

“This is an issue I'd love to see the president interject himself into,” Huckabee told Fox & Friends. “I'd love to see him say, as commander in chief of the military, 'Put the Bible back on the table. Let's not be stupid about this.'”

“F.E. Warren has a storied legacy in the American West and has been the way station for generations of military leaders who served their country,” he writes. “Col. Stacy J. Huser, by removing the Bible and by mouthing the offended group’s politically correct, bumper sticker, psychobabble nonsense, brings dishonor on this country’s uniform, those who served on the base before her, and those venerated by the memorial.”

Among those heroes are World War I fighter ace and Medal of Honor recipient Captain Eddie Rickenbacker; Gen. Mark W. Clark who served in both world wars and the Korean War; Maj. Walter Reed, after whom the Army Medical Center was named; father of the Air Force Maj. Gen. William L. Mitchell; first Air Force chief of staff Gen. Carl A. Spaatz; and General of the Armies John Joseph “Black Jack” Pershing.

“Gen. Pershing removed the Germans from Allied territory and, days ago, Col. Huser removed the Bible from a memorial,” Pendley lamented. “It is not your grandfather's Air Force anymore. What say you, Mr. President, Secretary Mattis, and Secretary Wilson? Is it yours?”

MRFF says that F.E. Warren is the eighth military base where it has successfully gotten “implied religious supremacy and divisive unconstitutional sectarian religious branding” — i.e., Bibles — removed from Missing Man Tables. The group has a long record of hostility to benign Christian expression in the military, including demanding punishment for chaplains who wore their uniforms to an event hosted by a religious liberty group and agitating for heavy restrictions on proselytizing by military chaplains.

“In 2015, he wrote a blog post calling for the ousting of Christian chaplains who disagree with same-sex ‘marriage,’ and also demanded that Satan, Allah Odin and others be added to a ‘God bless the military’ display in Hawaii,” Christian News adds.