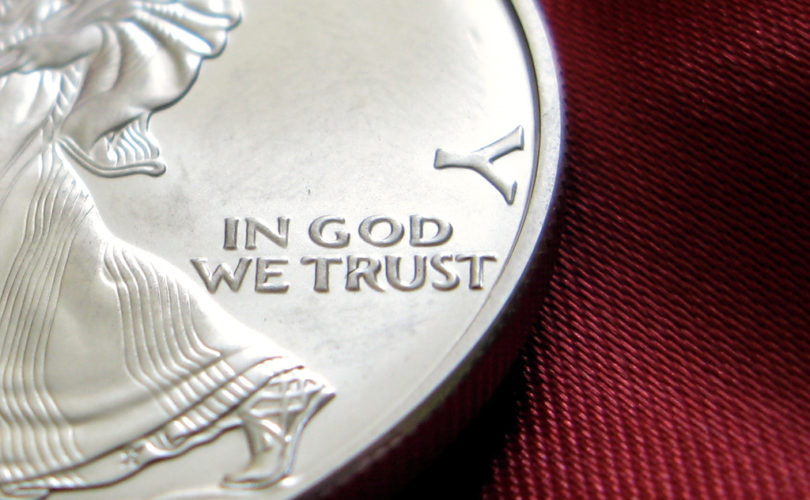 April 19, 2017 (LifeSiteNews) – Ardent secularist Michael Newdow is back in court arguing that “In God We Trust” ought to be declared unconstitutional and removed from all currency.

But the Becket Fund, a law firm dedicated to defending religious rights, believes Newdow’s arguments are unhistorical and even self-defeating.

Newdow, a doctor, lawyer and ordained minister of the First Atheist Church of True Science, has sued and lost many actions against the federal government, Congress, and Presidents George W. Bush and Barack Obama for official references to God in the Pledge of Allegiance, inauguration speeches, opening prayers, and currency.

Newdow usually argues these references violate the Constitution’s First Amendment, which prevents the federal government from establishing any state religion. He makes the argument again in this appeal to the 6th Circuit Court, but given its failure in the Second Circuit three years ago, he is hedging his bets with a paradoxical wrinkle.

This time, Newdow is also arguing that every federal reference to God discriminates against his own belief that there is no God. Newdow likens “In God We Trust” to the maintenance of “separate but equal” public facilities for white and African Americans in pre-1960s southern U.S. states.

While the U.S. Treasury Department is Newdow’s legal target, Becket has joined the case as “friend-of-the-court” on the federal government’s side and has fielded briefs contesting both of Newdow’s arguments. Becket’s Verm notes that Newdow has never won, but he is free to file new cases in different federal circuits from the ones that have ruled against him already.

Congress made “In God We Trust” the national motto in 1956, but it has appeared on coins for a century before that. It originated, in slightly different form, in the fourth stanza of The Star-Spangled Banner, written by Francis Scott Key while observing the British bombardment of Fort McHenry in the War of 1812. It became the national anthem in 1931.

Newdow’s argument for more than a decade has been that the “Establishment Clause” of the First Amendment of the Constitution bans any official reference to God. But Becket’s Verm told LifeSiteNews, “You have to look at the historical purpose of the clause.” This, she said, was to prevent the federal government from creating a state religion or adopting and supporting any existing denomination as the national religion.

Verm said the U.S. Supreme Court has long held the view that official references to God are historical, not theological. In 2010, in throwing out an earlier Newdow action, the Ninth Circuit held that “In God We Trust” is of a “patriotic or ceremonial character” and has no “theological or ritualistic impact.” It does not constitute “governmental sponsorship of a religious exercise.”

However, this time Newdow is arguing that the motto is also discriminatory, in the same way the courts have found that reserving separate schools or bathrooms or drinking fountains for Black Americans is discriminatory.

Becket responds that Newdow has no case because he cannot prove any injury.

Newdow’s own brief also claims his clients’ rights are violated under the “Free Exercise of Religion Act.” For this to work, an anti-religious viewpoint has to be treated as a religion. However, Becket argues that “one cannot claim that rejecting religious belief is itself an ‘exercise of religion,’ any more than one could claim that refusing to do pushups is a form of athletic training.”

Newdow’s brief states that his plaintiffs believe only in evidence and reason, and condemn religion precisely because it holds beliefs without evidence. Becket argues that this is self-defeating.

It is hypothetically possible, the Becket brief acknowledges, to discriminate against atheists on the basis of their lack of faith, but this would require the denial of a service or a right, such as the right to hold office. But the plaintiffs are not claiming they have been denied anything by the appearance of “In God We Trust” on coins or bills. The “Plaintiffs are not coerced by coins,” Becket’s brief concluded.