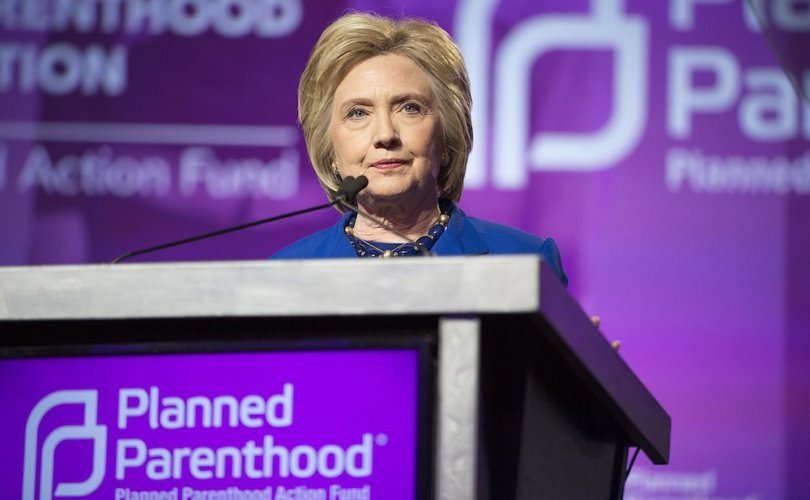 WASHINGTON, D.C., August 24, 2016 (LifeSiteNews) — The godless support Hillary Clinton for President of the United States, according to an atheist lobbying group.

The Secular Coalition of America (SCA), one of the largest atheist groups in the country, has nothing but praise for Clinton and nothing but disdain for Donald Trump.

They call themselves “nonreligious” and say in today's America that they represent the largest voting bloc in the nation.

Larry Decker, SCA executive director, explained, “The nonreligious are now the largest voting bloc in the country and it is essential that they know where the candidates stand on these critical issues.”

“Critical issues” for those who deny the existence of God include the absolute separation of church and state, supporting abortion, promoting sex-ed school curricula, fighting “discrimination” against the “nonreligious,” and upholding modern “science.”

For a grade, the atheists give Clinton an “A,” and Trump an “F.”  Decker criticizes Trump as a presidential candidate and says Trump is in “political peril” because he, in Decker's words, “panders to the religious right.”

A Pew Research poll shows that atheists support Hillary Clinton over Donald Trump by nearly a 3-to-1 margin (67 percent to 23 percent).

“Actually, the atheists had best temper their celebratory mood,” religion and culture expert Dr. Alex McFarland told LifeSiteNews. “The best research shows that there are 65 million to 80 million Christians who are voters — and perhaps over 100 million.”

“These Christian voters are known as ‘SAGECONS,’ which means, ‘Spiritually Active, Governance Engaged Conservatives,'” McFarland continued. “This group of Christian, patriotic, values-oriented voters — so often marginalized by the media and scoffed at by militant secularists — makes up a larger voting block than atheists, homosexuals, and Muslims combined.”

McFarland added, “And more than I’ve ever seen in my 25 years of ministry, these Christian conservative, Constitutionalist voters are getting engaged. Very much so.”