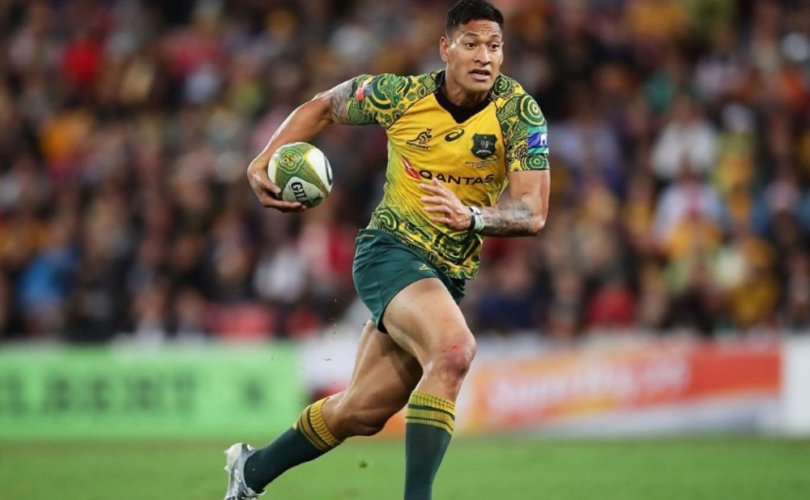 A three-person independent tribunal wrapped up on Tuesday three days of deliberations and found Folau guilty of a high-level breach of the code of conduct enforced by the governing body of Australian rugby teams. So far, no sanction has been announced against Folau. However, he may face cancellation of his $4 million contract and forgo a chance to appear in the forthcoming rugby world championship.

“The panel has today provided a judgment that Israel Folau committed a high-level breach of the Professional Players’ Code of Conduct with his social media posts on April 10, 2019,” read a statement from the panel that decided his case. “The panel will now take further written submissions from the parties to consider the matter of sanction. A further update with be provided after the panel delivers its decision on sanction.”

Once a decision has been made on a sanction, both Folau and Rugby Australia will have 72 hours to offer an appeal. While Folau may face a fine and suspension instead of a contract termination, he will never play again for the Wallabies team.

Any infraction deemed less than “high level” would not have allowed Rugby Australia to terminate Folau’s contract with the Wallabies team legally, forcing the governing body to offer an expensive monetary settlement to him.

A sanction is expected within several days, even while Rugby Australia has not yet set a timeline for a decision. Folau has already rejected a $1 million settlement, and will not receive any payout now because of the finding of guilt on his part.

Folau fell afoul of Rugby Australia after he published several controversial social media posts in which he expressed his religious beliefs concerning immorality, quoting the Bible. Raelene Castle, who heads Rugby Australia, issued Folau a notice that he had committed a high-level breach of the body’s code of conduct.

The decision in Folau’s case was met with support from some members of the media and sports. For example, media celebrity Ed Kavalee said on Fox Sports’ The Back Page, “This is the most expensive social media post of all time.” He added, “It’s cost Israel $4 million.”

Journalist Robert Craddock of the Courier-Mail said on The Back Page, “We’ve seen one of the most significant moments of the sporting century in Australia, in that a powerhouse rugby union player who is Australia’s best player heading into a World Cup, will be banished from the game, probably for good.” Craddock predicted further controversy.

Cory Bernardi, who leads Australian conservatives, expressed astonishment over Folau’s verdict. He told Sky News in a reference to Folau’s quoting of the Bible, “I find it extraordinary that quoting from the bestselling book in the history of the world is a breach of contract.” He added, “There was no hate in that at all. He’s just upset a bloke who runs an airline like a kingdom.”

Bernardi was apparently referring to Alan Joyce, the openly homosexual CEO of Qantas airlines and chief sponsor of the Wallabies. Joyce told a newspaper in the run-up to the 2017 same-sex marriage campaign, “We have 580 companies involved … If you’re unhappy with a company that’s involved with the campaign, you won’t be able to bank and you won’t be able to fly anywhere.”

Because free speech is guaranteed in Australia, Folau’s case may go to Australia’s High Court for consideration. After Rugby Australia’s initial announcement that it would cancel Folau’s contract, LifeSiteNews issued a petition asking for his reinstatement.

While Folau may never be able to play professional rugby in Australia again, a career in Europe is also in question. The president of the Toulon rugby club, Mourad Boudjellal, told French sports journal L’Equipe: “This guy’s a moron; he ought to clear out. Or he needs to buy himself a brain. He still has the Ku Klux Klan; then he’ll see what it’s like on the other side.” Also, sports shoe manufacturer Asics has announced that it is cancelling a lucrative contract with Folau.

An evangelical Christian, Folau has run afoul of gay rights campaigners in the past because of his support for traditional marriage. Asked by the Sydney Morning Herald whether he will leave professional rugby instead of apologizing for his beliefs as required by Australia Rugby, Folau said, “Whatever His will is, whether that's to continue playing or not, I'm more than happy to do what He wants me to do.” Folau said rugby is important to him, “but my faith in Jesus Christ is what comes first.”