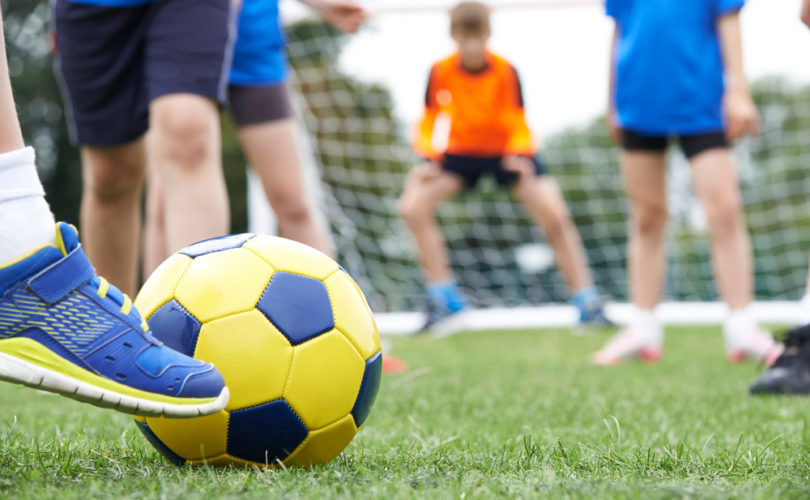 February 11, 2016 (CardinalNewmanSociety) — Catholic high school sports programs are not simply intended to allow students to achieve success on the field, they are an important part of the mission of Catholic schools to form students in the faith, according to athletic directors at faithful Catholic high schools, and compromising these programs by embracing gender ideology policies that are contrary to Church teaching will bring harm to both Catholic school sports and to students.

As The Cardinal Newman Society reported last month, the Catholic schools and bishops in Nebraska are challenging a state athletic association policy allowing high school students to play sports based on their gender identity. Catholic schools in other states have faced similar policy disputes with state athletic associations. And “every single diocesan school across the country will eventually be confronted with new guidelines allowing student athletes to compete according to gender identity,” Patrick Storey, athletic director at Holy Family Academy in Manassas, Va., an Honor Roll School of Excellence, told the Newman Society.

“I certainly think that attempts to change the traditional understanding of athletic competition to allow biological males to compete against biological females (or vice-versa) would absolutely endanger the purpose of Catholic athletic programs,” said Storey. “At our school, athletics have many purposes. Playing sports builds school spirit, teaches lessons of discipline and makes the high school experience more fun. But on a deeper level, Catholic education is always aiming at forming each individual student to become who they are meant to be by acquiring the virtues of body, mind and spirit.”

Tim Aylward, athletic director of the Honor Roll School of Excellence Lincoln Pius X High School in Lincoln, Neb., agreed that every diocese will soon have to deal with gender identity policies regarding student athletics, and said, “It may not be long until many schools will compete against a team that has a transgender athlete.”

Aylward pointed to recent statements made by Nebraska’s bishops about the potential harms of these policies.

“It would be unjust to allow a harmful and deceptive gender ideology to shape either what is taught or how activities are conducted in our schools,” wrote Archbishop George J. Lucas of Omaha, Bishop James D. Conley of Lincoln and Bishop Joseph G. Hanefeldt of Grand Island in a joint statement released January 4. “This would certainly have a negative impact on students’ and society’s attitudes towards the fundamental nature of the human person and the family.”

“It’s my hope that all schools, public or Catholic, would use athletics as another piece of the educational process, and focus on more than just trying to win every game,” Aylward told the Newman Society. “There are so many benefits, and life lessons that can be learned from athletic involvement in high school. Values of hard work, perseverance, team work, humility, sacrifice, commitment and sportsmanship to name a few. Through learning these values we want to help our students become productive adults, and also help our students become good Catholics.

“As a Catholic school we can talk about how these values pertain to our faith, and can be used to strengthen our faith,” he added.

Storey told the Newman Society that athletics should provide an avenue where “young men and young women, by developing skills and sacrificing their time for certain goals, can become more fully who they are and who God made them to be. That is why Christian athletes often thank God for their gifts when interviewed after competition.”

Young athletes are “very aware that they were able to win the race, or the game because they actualized the gifts given to them by God,” he said, “but God’s gifts to us would have to be based on the way he made us. Our biological reality is given to us by God.”

In Nebraska, the bishops urged schools and parents to support a “sex on the certificate at birth” proposal before the Nebraska School Activities Association (NSAA) that would “formally adopt the current NSAA practice that students participate according to their sex at birth.”

In votes taken on January 6 and January 13, four of the six NSAA districts voted to approve the “sex at birth” proposal, but the NSAA Board of Directors went ahead and adopted a policy allowing high school students to participate in sports based on their preferred gender identity. Those opposed to the gender identity policy will have to wait until April 8 for a chance to overturn it at the NSAA Representative Assembly meeting, where the “sex at birth” bylaw proposal will be up for a vote.

The bishops said they were “dismayed” by the Board’s decision, and called for “every effort” to reverse the new policy, adding that the decision “circumvents the will of the voting members expressed in the democratic process that was recently completed.”

Prior to the Board’s decision, Bishop Conley wrote in an opinion article in the Lincoln Journal Star, “Encouraging young people to redefine their identities in significant ways, according to their emotions, preferences or curiosities, is an act of irresponsibility on the part of adults entrusted with their formation.

“Very little is known scientifically about gender dysphoria, and the medical profession has yet to determine even its cause,” he continued. “Endorsing ‘gender reassignment,’ especially for children and adolescents who are likely to transition out of gender dysphoria with no intervention, is not a responsible public policy approach to the condition. There is no other dysphoric state in which the ordinary course of action is to endorse or facilitate a person’s disconnect from the objective facts of their existence.”

Bishop Conley further stated: “To endorse confusion about reality, especially in young people, whose preferences and perceptions are often transitory, will not lead to finding greater happiness. Truth — even when it is difficult — is the path of peace, happiness, and joy. … [T]hose who experience gender dysphoria are worthy of respect and support. But natural-born sex is the only participation criterion that is fair, safe, and supportive of the needs and rights of all Nebraska’s students.”

According to the Nebraska Catholic Conference, which lobbied on behalf of the bishops, there is some uncertainly about the effect that the new gender identity policy will have on the Catholic schools that are members of the NSAA, and decisions about implementing the policy “will be determined by the respective dioceses.”

Jason Adkins, executive director of the Minnesota Catholic Conference (MCC), told the Newman Society, there is still some uncertainty about a similar gender identity policy for students in Minnesota that went into effect during the 2015-2016 school year.

The Minnesota State High School League (MSHSL) passed a transgender student athlete policy in December 2014, which has “the main effect of allowing boys who identify as girls to play on girls’ athletic teams,” according to the MCC. “The Minnesota Catholic Conference opposed the policy as imprudent, and one that will not serve the well-being of those students experiencing gender dysphoria.”

In testimony given during an MSHSL hearing on the policy, Adkins said, “Our firm position is that a policy, such as this one, that rejects the reality that we are created male and female, and thus, by extension, rejects the Creator and his creation, is both harmful to the persons it is designed to support, as well as to all of society, by promoting a worldview that imposes a barrier to human flourishing.

“Compassion is not permissiveness,” he added. “True love and compassion sometimes means saying no to harmful things that people want to do to themselves.”

“Early draft versions of the policy applied to all MSHSL member schools,” Adkins told the Newman Society. “After numerous draft policies, the MSHSL ultimately exempted nonpublic schools from the mandates of the policy (both verbally and in writing).” But Adkins said the exemption “is admittedly not as clear as it should be.”

Adkins said it’s the MCC’s position that a religiously-affiliated school will not be penalized by the MSHSL for having policies such as:

-Not admitting transgender students into the student body.

-Mandating that student extracurricular and athletic participation be conducted consistent with one’s biological sex at birth, rather than preferred gender identity.

-Refusing to allow biological boys from entering girls’ facilities and vice versa (even if these students are from a different school).

“We have not heard of any further developments or clarifications of the policy, and continue to closely monitor any challenges or problems that may arise due to the current policy’s implementation,” Adkins said. “Thus far, our understanding is that Catholic schools have not been affected.”

A gender identity participation policy adopted by the Florida High School Athletic Association (FHSAA) in the spring of 2013 allows high school students to participate in sports “in a manner that is consistent with their gender identity and expression, irrespective of the gender listed on a student’s birth certificate and/or records.”

Michael B. Sheedy, executive director of the Florida Catholic Conference, told the Newman Society that FHSAA adopted an exemption from the policy for schools with strongly held religious principles, and, “Catholic schools in Florida avail themselves of the exemption to the policy.”

According to the website TransAthlete.com, “a resource for students, athletes, coaches, and administrators to find information about trans* inclusion in athletics at various levels of play,” about 30 state high school athletic associations have some sort of policy to allow students to play sports based on their perceived gender identity. The administrator of the site told the Newman Society that the information is current as of January 23, but the site does not track exemptions for religious schools.

“I do think that our Catholic schools will face enormous pressure to comply with politically driven changes to high school athletics,” Storey told the Newman Society, pointing out that even the International Olympic Committee recently announced policy changes to allow more athletes to compete in sports based on their gender identity.

Previous Olympic guidelines stated, “Transgender athletes had to have gender reassignment surgery; they must have legal recognition of the gender they were assigned at birth; and they had to have undergone at least two years of hormone replacement therapy after surgery,” according to ESPN. “The proposed new rules would bring the Olympics in line with the NCAA’s standard of one year of hormone replacement therapy — with no surgical requirement — before being allowed to compete.”

“It is difficult to foresee what the reaction will be from these diocesan schools” if new gender identity policies are implemented, said Storey. “If such guidelines are implemented by various state high school athletic associations, and the Catholic schools do not comply, they would most likely be prohibited from competing at state sponsored events like the state championship.”