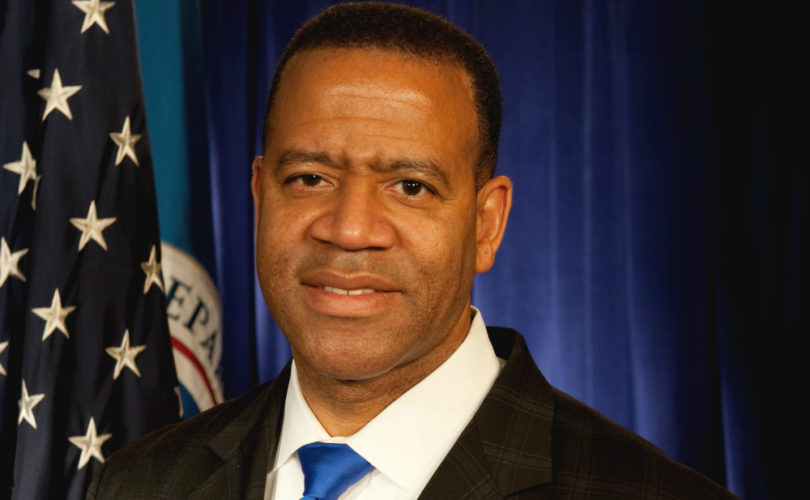 Atlanta Fire Rescue Chief Kelvin Cochran has been suspended for one month without pay, ordered to undergo sensitivity training, and told by government officials to check his beliefs “at the door” for publishing a book affirming that homosexuality and other forms of sex outside marriage violate the Bible's teachings.

Last November Cochran, a former Obama administration appointee, published the book Who Told You You Were Naked?

Certain behaviors, he warned, lead to a life that inherently contradicts God's blessings.

“Sexual acts pursued for purposes other than procreation and marital pleasure in holy matrimony is the sex life of a naked man. When men are unrestrained in their quest for sex outside of God’s purpose they will never be fulfilled,” Cochran wrote. “Naked men refuse to give in, so they pursue sexual fulfillment through multiple partners, with the opposite sex, same sex and sex outside of marriage and many other vile, vulgar and inappropriate ways which defile their body-temple and dishonor God. This is the kind of sex that leaves a man continually empty–the sex life of a naked man.”

Homosexual activists objected to that passage, as well as a brief line that defines “uncleanness” as “whatever is opposite of purity; including sodomy, homosexuality, lesbianism, pederasty, bestiality, and, all other forms of sexual perversion.”

He said his “greatest desire is to fulfill the purpose of God for his life” in part through his dedication to the fire department, “to cultivate its culture to the glory of God.”

The city's Democratic leadership and homosexual lobbyists were outraged.

Atlanta Mayor Kasim Reed placed Cochran under a one-month suspension without pay and ordered him to undergo sensitivity training.

According to the Atlanta Journal Constitution, Cochran makes $172,000 a year. A one-month suspension would cost Cochran $14,333 for expressing his Christian views.

“I was surprised and disappointed to learn of this book on Friday,” Reed said on Monday afternoon. “I profoundly disagree with and am deeply disturbed by the sentiments expressed in the paperback regarding the LGBT community. I will not tolerate discrimination of any kind within my administration.”

District 6 Councilmember Alex Wan, who is openly homosexual, said, “When you’re a city employee, and [your] thoughts, beliefs and opinions are different from the city’s, you have to check them at the door.”

The city maintains that it suspended him for publishing a book and identifying himself as a city fire chief without the administration's permission. “One of the most alarming things is that we did not know about the book when it was published,” Reed's spokeswoman Anne Torres said.

But some spokespeople, and the imposition of sensitivity training, indicate the real problem is Cochran's embrace of traditional morality. Stephen Borders, presidents of the Atlanta Professional Firefighters union, told the Journal Constitution, “The fact that he’s representing himself as a fire chief and bringing this into the fire department – to me that’s not the message we need to send to employees nor the citizens.”

Cochran has had a distinguished career in his chosen field. The fire chief in Shreveport, Louisiana, from 1999 until 2008, Cochran came to Atlanta just a year before being named FEMA's U.S. Fire Administrator by President Obama. (Obama saluted his “valuable expertise.”) In May 2010, he returned to Atlanta.

Reed has forbidden Cochran from distributing his book at his workplace. Homosexuals say his religious views may create a “hostile working environment” for those who do not share his sexual continence or practice heterosexual monogamy.

Cochran told Atlanta's WSB-TV that he would defend himself from his accusers' charges, but not until after his suspension had been served or lifted.

His 162-page book is available online from the publisher or on Amazon.