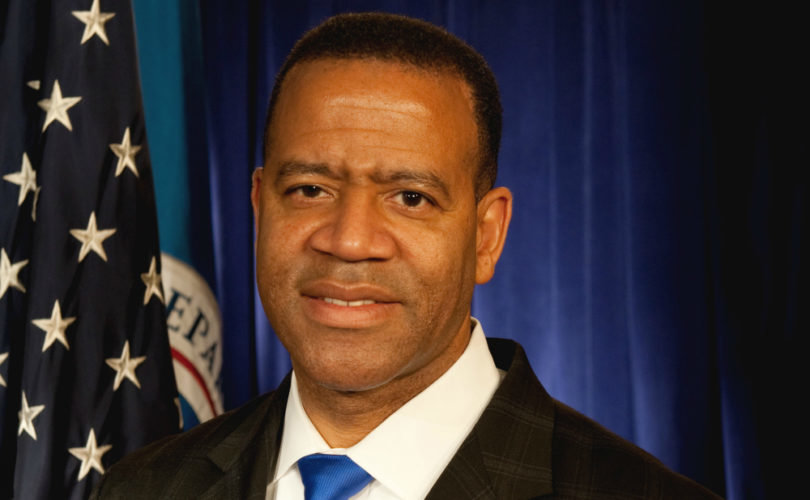 Gay activists complained about two pages in the 160-page book that affirmed Christian teachings on sex and marriage.

The City of Atlanta has sacked its fire chief for expressing his personal religious beliefs in a Bible study publication.

The city’s mayor accused Kelvin Cochran, an African-American Baptist church deacon, of “discrimination” and questioned his judgment and management capabilities after gay activists complained about the book.

While announcing Cochran’s January 6 dismissal, Mayor Kasim Reed strove to quash any claims that the issue was about Cochran’s First Amendment rights.

Reed suspended Cochran in November because of what he wrote in two brief passages of his 160-page Bible-study, “Who Told You That You Were Naked?” which was published in 2013.

In defining “uncleanness” Cochran wrote, “whatever is opposite of purity; including sodomy, homosexuality, lesbianism, pederasty, bestiality, all other forms of sexual perversion.”

In the other section he wrote, “Naked men refuse to give in, so they pursue sexual fulfillment through multiple partners, with the opposite sex, the same sex, and sex outside of marriage and many other vile, vulgar and inappropriate ways which defile their body – temple and dishonor God.”

“I profoundly disagree with and am deeply disturbed by the sentiments expressed in the paperback regarding the LGBT community,” Reed’s post stated. “I will not tolerate discrimination of any kind within my administration.”

It was in that post as well where he announced Cochran would be suspended for 30 days without pay and required to take sensitivity training.

“I want to be clear that the material in Chief Cochran’s book is not representative of my personal beliefs,” Reed said. “And is inconsistent with the Administration’s work to make Atlanta a more welcoming city for all of her citizens – regardless of their sexual orientation, gender, race and religious beliefs.”

“It was not my intent to be hurtful to anyone,” he said.

Cochran’s firing occurred the same day he was scheduled to return to work from his suspension.

In an interview with Fox News, he pointed out that references to homosexuality were minimal in the book, and that the focus was actually on sin.

“I did not single out homosexuality,” Cochran said. “I simply spoke to sex being created by God for pro-creation and He intended it to be between a man and a woman in holy matrimony – and that any other sex outside of that is sin.”

He also said Christians have the right to freedom of speech.

“The LGBT members of our community have a right to be able to express their views and convictions about sexuality and deserve to be respected for their position without hate or discrimination,” Cochran said. “But Christians also have a right to express our belief regarding our faith and be respected for our position without hate and without discrimination. In the United States, no one should be vilified, hated or discriminated against for expressing their beliefs.”

Cochran, who acknowledged he’d given some copies of the book to personal friends in the fire department, said someone got hold of a copy and took it to Alex Wan, an openly homosexual Atlanta City Councilman. The Bible-study touched off controversy with Atlanta homosexual supporters, resulting in calls for Cochran’s firing.

“I guess they got what they asked for,” he said.

Accounts differ between Reed and Cochran as to how the matter played out.

Reed claimed he had no knowledge of Cochran’s plan to write the book, but Cochran said he got permission from the City’s ethics director to publish it, something Reed disputes. Cochran also says that the ethics head okayed him including his position as fire chief in his bio for the book. Cochran said he also gave a copy to the mayor in January 2014, and Reed told him he planned to read it on an upcoming trip.

A year after coming to Atlanta, Barack Obama appointed him U.S. Fire Administrator for the United States Fire Administration in Washington, D.C. While there Cochran oversaw national efforts to prevent fires and improve fire response. He also worked at length with the Federal Emergency Management Agency and the Department of Homeland Security during this time.

His extensive career in fire service includes all segments of the profession, according to his former City biography, and he has held leadership positions in industry organizations from local to international levels.

Cochran returned to Atlanta in 2010 where he once again became the city’s fire chief with a unanimous confirmation.

“This is appalling. This has everything to do with his religious beliefs,” said Georgia Baptist Convention President Robert White. “It’s a frightening day in the United States when a person cannot express their faith without fears of persecution following. It’s persecution when a godly fire chief loses his job over expressing his Christian faith.”

“I know in the mayor’s press conference he insisted that it’s not about religious freedom,” Faith and Freedom Coalition Executive Director Timothy Head said in a statement. “But when someone is disciplined and ultimately terminated because of personal views expressed, that’s kind of the definition of a First Amendment issue.”

The Alliance Defending Freedom is representing Cochran, according to a Reuters report, and said the City fired him for nothing other than his Christian faith.

Cochran said he doesn’t hate anyone, and that he was not downtrodden or discouraged.

“This is a God thing,” he said. “And He’s going to do great things and He will vindicate me publicly.”