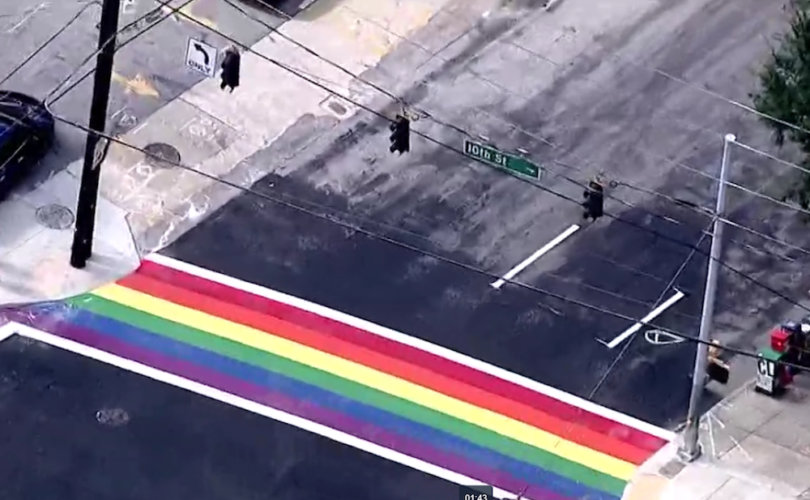 A report from NBC affiliate 11Alive said no one the station spoke with seemed to take issue with the pro-homosexual message, but it was the cost that got under most people’s skin.

Atlanta Mayor Kasim Reed announced in June that the city would permanently install the rainbow crosswalk at the intersection of Piedmont Avenue and 10th Street in midtown Atlanta.

The announcement was in conjunction with an observance of the one-year anniversary of the terrorist attack on Orlando’s Pulse gay nightclub that took 49 lives.

The intersection is the central point of Atlanta’s gay community. The neighborhood itself had raised money to paint the intersection in rainbow colors in 2015 for Atlanta Pride Week.

Now the city has opted to make the rainbow permanent, emphasizing the rainbows are composed of thermal plastic tiles that will last 10 years and represent just three-tenths of one percent of the city’s transportation budget.

That has not stopped people from scratching their heads over the decision.

The news station asked viewers to weigh in on whether the rainbow crosswalk was worth $196,000 in taxpayers money. A poll on its Facebook page in the first few hours had 77 percent voting “no” compared with just 23 percent saying “yes.” The trend continued in the days after its July 12 posting.

“To paint them?” the woman asked.

“That’s a lot for the paint,” another man stated. “I would have done it for half the money.”

“I don’t see how it costs that much money,” said yet another. “I could see where the money could have gone to better use, paving some of these holes in these roads.”

“When I lived in Key West, the city did this at a cost of exactly $4K, and the city only paid half of that,” tweeted one user.

This theme was expressed repeatedly, as yet another stated, “What a waste of money. Someone could have EASILY done that for $1,000.”

And from someone else came this,” Nothing against the crosswalk but where'd they buy the paint? Holy hell I'm moving to Atlanta and opening a Sherwin Willams! High $ paint!

Atlanta did not install the first permanent gay pride rainbow crosswalk in the U.S., according to the report. At least eight other cities beat the city to it, including Houston, San Francisco, Seattle, and Philadelphia.