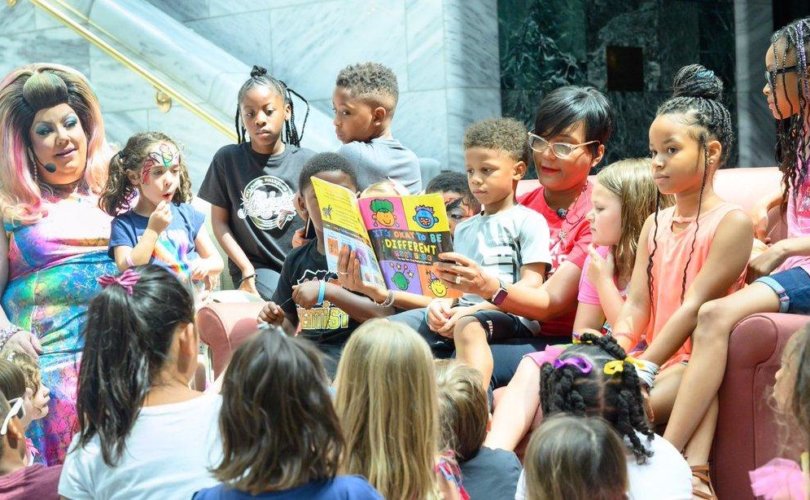 “We want to thank our friends at the Atlanta Hawks, Atlanta Falcons, Whole Foods, Georgia Beverage and Atlanta Pride for partnering with us for Drag Queen Story Hour,” tweeted One Atlanta, the Mayor’s Office of Equity, Diversity and Inclusion.

We want to thank our friends at the @ATLHawks, @AtlantaFalcons, @WholeFoods, @GABeverage and @atlantapride for partnering with us for Drag Queen Story Hour.

Thank you for your commitment to a welcoming, diverse and inclusive Atlanta. �� #OneAtlanta pic.twitter.com/S5lSfErJ73

The Atlanta Hawks sent their mascot, ‘Harry the Hawk,” wearing pride flag plumage, to the event.

Atlanta Mayor Keisha Bottoms invited ‘Miss Terra Cotta Sugarbaker,’a.k.a., Steven Igarashi-Ball, to perform in City Hall after a DQSH he was scheduled to perform in at a nearby Fulton County Library branch was removed from the library system’s event calendar.

While the event wasn’t canceled, the library’s decision to halt all promotion of the event was perceived as a snub to the drag queen.

“Thank you to everyone who joined us at today’s Drag Queen Story Hour with Mayor Keisha Bottoms and Miss Terra Cotta Sugarbaker,” read a tweet posted by the City of Atlanta’s Official Twitter account.

Thank you to everyone who joined us at today’s Drag Queen Story Hour with Mayor @KeishaBottoms and Miss Terra Cotta Sugarbaker. We are #OneAtlanta!�� #Pride2019 pic.twitter.com/Pmb5rlpIwH

“‘It’s Okay to be Different’ and ‘Mary Had a Little Glam’ were read to Atlanta’s kids and families at Saturday’s Drag Queen Story Hour,” tweeted Paulina Guzman, global Engagement Officer at the Atalnta Mayor’s Office of International Affairs. “It’s important to share positive messages of acceptance and confidence in our communities!”

“It’s Okay to be Different” and “Mary Had a Little Glam” were read to Atlanta’s kids and families at Saturday’s Drag Queen Story Hour. It’s important to share positive messages of acceptance and confidence in our communities! ���� @ATLEquity #OneAtlanta pic.twitter.com/UiXKTpkmbc

Local TV station CBS 46 reported that the event was attended by mostly gays, lesbians, and their children, saying “dozens of folks in the LGBTQ community went here to City Hall to take part in Drag Queen Story Hour.”

Many of the kids who are brought to the DQSH events are children of gay and lesbian parents, who hope the exposure to other children of gays and lesbians will give their kids the impression that their family situation is normal.

“We’re a lesbian couple so we like out kids to come out and interact and see that there are other kids like them,” said one woman interviewed in the report.

“The goal is to normalize abnormal, sexually deviant homosexual behavior by enticing children to first: question their sexuality,” pro-family activist Georgia Kijesky recently told LifeSiteNews. “The more children see men dressing up as women, the more normal it will become.”

In addition to the Atlanta Hawks and the Atlanta Falcons, Whole Foods (owned by Amazon) and Georgia Beverage were cosponsors of the event.