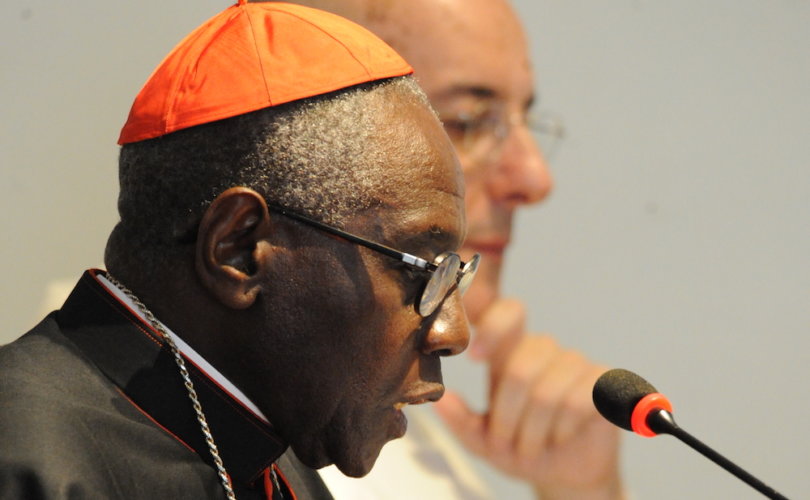 ROME, Italy, February 10, 2020 (LifeSiteNews) – Cardinal Robert Sarah has declared that the Catholic priesthood is “in mortal danger” and “going through a major crisis” because of the push from various voices within the Church to abolish priestly celibacy. The African prelate called out those who want to make celibacy optional.

Ahead of the publication of the post-synodal Apostolic Exhortation “Querida Amazonia” on Wednesday, February 12, which has been rumored to open the doors to married priests, Cardinal Sarah told Edward Pentin of the National Catholic Register that faithful Catholics are not asking for priestly celibacy to be overturned.

“The ordination of married men is a fantasy of Western academics who are in search of violations. I want to affirm it forcefully: The poor, the simple, rank-and-file Christians do not demand an end to celibacy,” he said.

Sarah, the prefect of the Congregation for Divine Worship and the Discipline of the Sacraments, said there are voices within the Church who would like to “relativize the celibacy of priests.”

“That would be a catastrophe! For celibacy is the most obvious manifestation that the priest belongs to Christ and that he no longer belongs to himself. Celibacy is the sign of a life that has meaning only through God and for him,” he said,

“To want to ordain married men is to imply that priestly life is not full time, that it does not require a complete gift, that it leaves one free for other commitments such as a profession, that it leaves time free for a private life. But this is false. A priest remains a priest at all times. Priestly ordination is not first of all a generous commitment; it is a consecration of our whole being, an indelible conformation of our soul to Christ, the priest, who demands from us permanent conversion in order to correspond to him. Celibacy is the unquestionable sign that being a priest supposes allowing oneself to be entirely possessed by God. To call it into question would seriously aggravate the crisis of the priesthood,” he added.

Sarah pointed to Germany, where married priests have been discussed for a long time, and more forcefully since the launch of the “synodal path.”

“But I am uneasy. In Germany, a strange synod clearly envisages the questioning of celibacy. I wanted to cry out my concern: Do not tear the Church apart! By attacking the celibacy of priests, you are attacking the Church and her mystery,” he said.

Explaining that those who attack celibacy want to make the Church a purely human institution, “within our power, within our reach,” the cardinal continued, “It means renouncing the mystery of the Church as God’s gift.”

If married men in the Amazon region were allowed to become priests, Sarah argued, that “would prohibit the raising of vocations of unmarried priests. The exception would become a permanent state.”

Asked about priests within the Catholic Church who are married, namely as part of the Anglican Ordinariate and the Eastern churches, Sarah clarified that those exceptions constitute “a parenthesis in the normal and natural state of things.” At the same time, he said, “the lack of a priest is not an exception,” especially in nascent or dying churches.

Cardinal Sarah also attempted to dispel a number of myths surrounding the question of married priests. Even though married priests did indeed exist in the first few centuries of the Church, after their ordination, “they were required to abstain completely from sexual relations with their wives.”

Referring to the Council of Elvira in 305, Sarah made clear that one of the first concerns of the Church after the age of martyrdom was “to affirm that priests must abstain from sexual relations with their wives.”

He quoted the council itself, which stated, “It was unanimously agreed that bishops, priests and deacons, that is to say, all clerics constituted in the ministry, should abstain from their wives and should not bear children; whoever has done so (had sexual relations) should be declared to be deprived of the clerical office.”

In January, Cardinal Gerhard Müller said that the Eastern churches, by allowing married priests, had departed “from the tradition of the early Church.”

Cardinal Sarah echoed this assessment. “It was only much later, because of the corruption of the texts, that the East would evolve in its discipline, without ever renouncing the ontological link between priesthood and abstinence.”

Apart from historical considerations, Sarah also sees practical problems with having married priests, without doubting the holiness of married priests in Eastern churches. “If a priest is married, then he has a private life, a conjugal and family life. He must make time for his wife and children. He is unable to show, by his whole life, that he is totally and absolutely given to God and the Church.”

Starting with statements by former Pope Benedict XVI, Cardinal Sarah stated that he has shown “that at the root of the abuses committed by clerics, there is a deep flaw in their formation.”

“They wanted to make the priest a man like any other. Some priests were formed without putting God, prayer, the celebration of Mass, the ardent search for holiness at the center of their lives,” Sarah elaborated.

According to the African cardinal, priests were formed without teaching them about God as their only support, “without making them experience that their lives only have meaning through God and for him.” If God is taken out of the equation, the priest is left with nothing but power, Sarah continued.

“If a priest doesn’t daily experience (that) he is only an instrument in God’s hands, if he doesn’t stand constantly before God to serve him with all his heart, then he risks becoming intoxicated with a sense of power. If a priest’s life is not a consecrated life, then he is in great danger of illusion and diversion,” Sarah cautioned.

Cardinal Sarah briefly commented on the rollout of the book From the Depths of Our Hearts, to which Pope Emeritus Benedict XVI had contributed.

Sarah accused the opponents of the priesthood of making the former Pope out to be an old man. He then asked, “But have you read what he writes? Do you think one can write pages of such depth without having all one’s faculties?”

He further accused “some people” of trying “to make us believe that our publishers have manipulated us and have taken advantage of a misunderstanding to mount I don’t know what kind of communication stunt. This is totally false! There is no misunderstanding. Our French publisher has simply implemented what I personally worked out with the Pope emeritus.”

In this context, Sarah praised his French publisher Fayard, with which he had already worked on many other projects, including his trilogy of interview books that were written together with Nicolas Diat. “All these polemics are a diversionary tactic to avoid talking about the essential, the content of the book,” Sarah is convinced.

French newspaper Le Figaro first reported on the book on January 12. The cover of the original edition of the book on celibacy portrayed Benedict as a co-author, including a photo of the former Pope the same size as that of Sarah.

Archbishop Georg Gänswein, prefect of the Papal Household and private secretary of the former Pope, said January 14 that he had called Cardinal Sarah “at Benedict’s request, to ask the book’s publisher to remove the signature of the Pope emeritus from the introduction and conclusion, because he had not co-authored them.”

Following the first backlash, Sarah said in a statement, “The polemic which has aimed to tarnish me for several hours by implying that Benedict was not informed of the appearance of the book ‘From the Depths of Our Hearts’ is completely despicable.”

While the first edition of the book, for reasons of time, was still printed portraying the Pope emeritus as a co-author, future editions were announced as only referring to him as a contributor.

The publisher of the English version, Ignatius Press, maintains that Benedict is a co-author. They argued: “Given that, according to Benedict XVI’s correspondence and Cardinal Sarah’s statement, the two men collaborated on this book for several months, that none of the essays have appeared elsewhere, and that a joint work as defined by the Chicago Manual of Style is ‘a work prepared by two or more authors with the intention that their contribution be merged into inseparable or interdependent parts of a unitary whole,’ Ignatius Press considers this a co-authored publication.”

Archbishop Gänswein later said the introduction and the conclusion were not written by both, but only by the cardinal, even though the French publisher said otherwise.

The German archbishop has not been seen with Pope Francis at his Wednesday audiences for almost a month, which the Vatican claims is “due to ordinary redistribution of the various commitments and duties.”