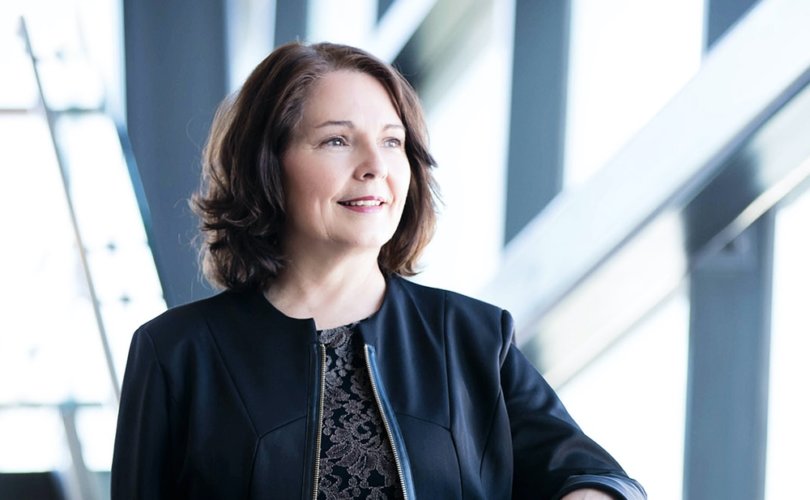 OTTAWA (LifeSiteNews) – Pro-life Conservative Party of Canada (CPC) Member of Parliament (MP) Cathay Wagantall was forcibly removed from the House of Commons Friday after she refused to abide by a rule mandating all MPs have two COVID jabs or a medical exemption.

“This is ridiculous. Ontario is open. My province has been open for a long time,” Wagantall, who objects on principle to sharing her health information in order to enter Parliament, said in a press conference Friday.

“I’m prepared to do whatever I need to do to continue to do my job as best I can in light of the circumstances.”

Wagantall noted that she “was expecting something to happen” in terms of being removed from the House of Commons for not revealing her COVID jab status. It was on Friday she learned “that there was a possibility of that” happening.

She said she was pulled aside into the Sergeant-at-Arms office. Shortly after, CPC House leader John Brassard told her that she might be kicked out of the House of Commons.

“So, my goal was to not leave unless I was basically forced to, which to some degree happened,” she said.

Wagantall noted that later in the day after deciding to leave the House of Commons for a committee meeting, the Sergeant-at-Arms escorted her outside of the building.

She shared the text written on the back of her identification badge, which guarantees an MP free access to parliament: “Under the law of parliamentary privilege, the bearer has free and open access at all times without obstruction or interference to the precincts of the House of Parliament, of which the bearer is a member.”

Last fall, Prime Minister Justin Trudeau’s federal government put in place a ban on democratically elected MPs and staff who did not get the COVID jabs from accessing the nation’s center of democracy, the House of Commons. The rule came into effect on November 22, 2021.

Wagantall said she had first submitted a medical exemption, which the House of Commons nurse had accepted. However, the rules for un-jabbed MPs were recently changed.

The new rules say the Ontario Ministry of Health and the National Advisory Committee on Immunization is the only body that can offer medical exemptions. The exemptions include one having myocarditis – heart inflammation – or a pre-existing health condition due to a vaccine-related reaction.

Wagantall said that there are very good reasons why an “exemption should be given to a number of Canadians,” who may choose not to “get vaccinated or are unable to be vaccinated.”

“And this prime minister has decided that the only way you get an exemption is if you take that first vaccine and you have an anaphylactic reaction to it. That’s insane. And the fact that the nurse of the House of Commons gave those exemptions shows that she is the medical professional, and she understands that she’s not working out of a political agenda. She’s doing what is right,” noted Wagantall.

“And the majority of Canadians, I think, especially public servants and those who are maybe more under the thumb of this government, are not being given fair treatment in that regard.”

Recently, Wagantall made the drive to Ottawa from her home in Saskatchewan so that she could sit in person in Parliament. She said she has made the drive four times, which on average takes three and a half days one way, as she is not “allowed” to take an airplane.

‘Stark example of how far democracy has fallen in Canada’

“Yesterday we saw a stark example of how far democracy has fallen in Canada,” Lewis wrote on her website.

“Parliament does not belong to Justin Trudeau. It belongs to the Canadian people.”

Lewis added that “Cathay was told to leave the premises as if she was some kind of threat” despite being elected to represent “her constituents” and despite there being “no vaccine mandate in Ontario, despite the fact that Prime Minister Trudeau sat down next to Cathay mask-free with no concern on Tuesday morning.”

“She was elected by nearly 70% of voters in her riding. Chosen BY the people, to be their voice, and she was removed from the parliament that is supposed to be THEIR House of Commons,” wrote Lewis.

On Friday, Poilievre tweeted that what happened to Wangatall was an “attack on democracy.”

“Ms. Wagantall was elected by her people to serve in Parliament. Blocking her from doing her job is an attack on thousands of citizens that elected her. End all mandates now. Restore democracy,” wrote Poilievre.

‘The hypocrisy is just unbearable’

“I had the opportunity to host the National Prayer Breakfast a couple of days ago,” noted Wagantall, adding that the “prime minister was there…for an hour and a half in very close quarters with no mask,” eating next to her.

“I have been very patient for a long time, and I think it’s time that, you know, I appreciate you guys as well expressing the fact that this is ridiculous.”

Wagantall first became an MP in 2015 and since that time has made a name for herself as outspokenly pro-life and pro-family.

Last year, a private members bill she brought forward that would have made it illegal for any doctor in Canada to knowingly commit an abortion merely because of the sex of the unborn baby was defeated in the House of Commons.

Last year, Trudeau put in place a mandate that in effect bans those who have chosen not to get the COVID vaccines from domestic or international travel by air, rail, or sea.

Last week, Poilievre introduced a private members bill that would ban “the government from imposing vaccine mandates as a condition of travel or employment.”

Calls to remove Canada’s COVID jab mandate for travel have intensified over the last week.

The International Air Transport Association (IATA) said the Canadian government should end at once all COVID travel restrictions, including vaccine mandates.