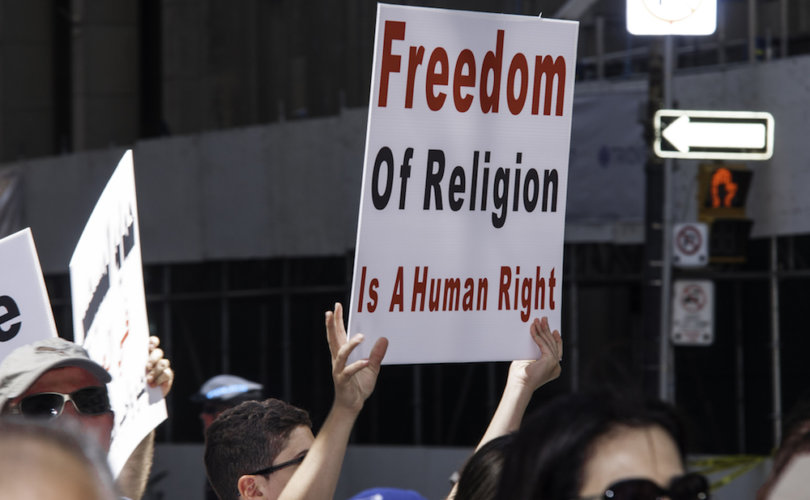 September 20, 2017 (LifeSiteNews) — Attacks on religious liberty increased dramatically in 2016 according to a report on hostility toward the exercise of faith in the United States, rising to 1,400 documented attacks on religious freedom since the report first started chronicling them in 2011.

The annual report, “Undeniable: The Survey of Hostility to Religion in America,” indicates a 15 percent increase in anti-religious liberty cases in the past year compared with the previous year. It was released Tuesday by First Liberty Institute, which defends the First Amendment rights of Americans to live out their faith without reprisals from the government.

The annual report, now 418 pages, is cumulative, but First Liberty reported that attacks on religious liberty increased “massively” in 2016.

“We are in a battle for the future of the country right now,” said First Liberty CEO and chief counsel Kelly Shackelford in a Facebook Live broadcast about Undeniable. “There’s a real battle over religious freedom. You try to pass a law [protecting] religious freedom in any state and it would be very difficult because there’s so much controversy now over religious freedom, which is amazing.”

The book is available free from First Liberty Institute as a downloadable PDF or as a hard-cover book to those who request it. The following are some of the cases (many familiar to LifeSiteNews readers) described in the book:

— A disabled nurse ordered to stop praying in the privacy of her home.

— A beloved football coach fired for briefly kneeling in quiet prayer after games.

— A lay pastor fired from his position as a health official solely because of sermons that he preached at his church.

— A retired Air Force veteran physically ejected from a military base for planning to give a well-known flag-folding ceremony speech that included the word “God.”

— A small family bakery shut down and penalized $135,000 for politely declining to create a custom cake to celebrate, against their religious beliefs, a same-sex wedding.

— A high-ranking Navy chaplain severely disciplined for compassionately counseling from the Bible.

Attacks are ‘pervasive’ across the USA

Shackelford said attacks on religious liberty in the United States are not concentrated in one specific area of the law or a geographic region but rather are “pervasive across all areas … veterans’ memorials under attack, people in their employment … people who own their own businesses are now being told, ‘You either change your religious beliefs … or we’re going to shut your business down or we’re going to fine you.’”

He said defenders of religious freedom have won some battles, but from a legal perspective, “we don’t know which way this is going to go.” He cited as an example the cases of county commissioners who are being targeted by secular forces because they pray before official county meetings begin. Competing federal Circuit Courts of Appeal (the Fourth Circuit versus the Sixth Circuit) have come down on opposite sides of whether such prayers are “constitutional,” even though prayers before legislative proceedings date back to America’s founding and the Supreme Court has affirmed that such prayers are indeed constitutional.