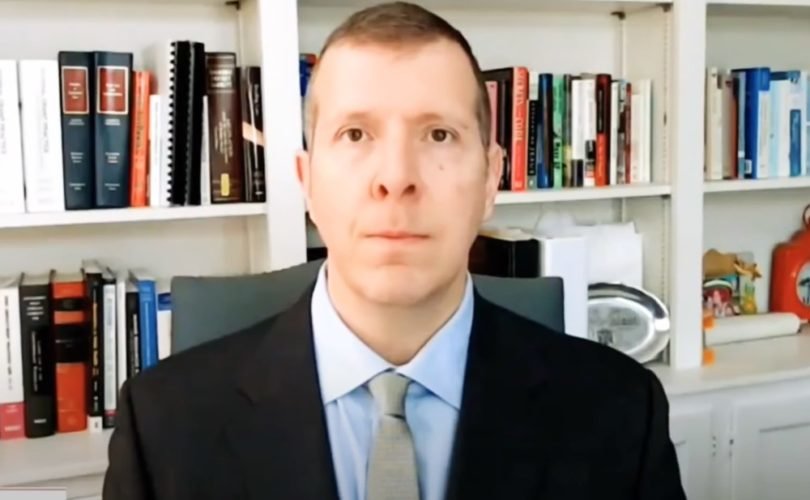 (LifeSiteNews) — Ohio attorney Thomas Renz made waves last month when he announced a lawsuit alleging that there have been at least 45,000 deaths connected with the experimental COVID-19 shots currently on the market, according to sworn testimony from an expert whistleblower.

Renz told LifeSiteNews in an interview ahead of his appearance at the Truth for Health Foundation’s “Stop the Shot” townhall conference this week that 45,000 is a low-ball estimate, and his federal lawsuit seeks to prove it.

Based on a statement from the whistleblower signed under penalty of perjury, Renz has filed a motion on behalf of America’s Frontline Doctors (AFLDS) against the U.S. Department of Health and Human Services (HHS).

The lawsuit seeks to stop the HHS from continuing to authorize the COVID-19 shots for emergency use, and to prevent full Food and Drug Administration (FDA) approval for the drugs.

Renz said informed consent is “a critical aspect” of the lawsuit.

“It is a very, very fundamental aspect of this,” he told LifeSite. “How do you give informed consent on the dangers of a medicine if those dangers are being kept secret?”

Renz, who is also the lead attorney in several other high-profile cases against federal agencies related to fraud and violations of medical freedom rights, said he has evidence to show that the 45,000 deaths reported by the whistleblower are actually drastically underestimated.

“We took really the most conservative estimate we could in this because we wanted to make sure that we were being more conservative rather than less,” Renz said. “Some of the numbers that I have evidence on are astronomically higher.”

Renz’s whistleblower is a government-related computer programmer who works in healthcare data analytics. Identified only as “Jane Doe,” she has declared under penalty of perjury that according to medical claims submitted to the Centers for Medicare and Medicaid Services (CMS), the deaths reported to the Vaccine Adverse Event Reporting System (VAERS) are “under-reported by a conservative factor of at least 5.”

But Renz said the programmer with access to CMS data was not the only one to come forward. Another whistleblower contacted Renz this week, claiming the VAERS database is far behind in its reporting.

Renz said that according to the whistleblower, “There are at least a hundred thousand reports that are not in VAERS that should be. There’s really no reason really at all that they’re not there.”

“But here’s really the key thing that everybody’s got to ask themselves,” he said. “Why do we have to guess? Why isn’t the government making the truth about this known? They have 11 or 12 different methods by which they collect data on this. Why isn’t this being properly analyzed and made public? Why did I have to get a whistleblower to analyze it?”

Renz said that if the government is not interested in analyzing the data, “I’ve got some people who will fund an independent analysis.”

“If they don’t want to trust the whistleblower, that’s fine. Give us the raw data. I will have an independent analysis done and we’ll see what it actually says.”

The Ohio attorney said there is a “huge conflict of interest” among public health agencies and the pharmaceutical companies responsible for manufacturing COVID-19 shots, and argued that public health officials are “hiding behind the cloak of government immunity.”

According to Renz, the emergency use authorizations (EUAs) for the injections help shield government agencies from responsibility for accurately reporting adverse reactions and deaths.

“Here’s the real shady thing,” he said. “Under existing law and existing precedent, if this were fully approved rather than just authorized under EUA, the vaccine companies would have to advertise it, under the rules for informed consent. Because it’s not approved, because it’s only authorized as an [EUA], the vaccine companies aren’t saying too much.”

“Where you’re hearing ‘safe and effective’ is from government officials who have a vested interest, who are getting paid, who are getting money from their own interests in this,” said Renz, noting that HHS holds intellectual property rights for the Moderna shots.

“So, we’ve got the people who own these vaccines, partial owners, acting as the gatekeepers as to whether it’s safe,” he explained. “It’s absolutely corrupt beyond words.”

‘A battle of good and evil’

Renz said he believes the public health agencies, pharmaceutical companies, and members of the legacy media are motivated by a variety of factors, but that what “the different groups have in common… is that the people promoting this narrative are all getting something out of it.”

Renz said he believes COVID-19 vaccine mandates “are illegal” and slammed Republican governors, legislators, and others who have stood by while employers have begun forcing their employees to get the experimental drug or lose their jobs.

“That is absolute garbage,” Renz argued. “If you are a conservative thought leader and you are not talking about individual rights, you have a problem.”

The attorney said the fight for individual freedom against COVID-19 mandates is “a battle of good and evil.”

“Ultimately this goes to where we have to be and what America was always meant to be, which is self-determination and individual responsibility.”

— Article continues below Petition —
PETITION: No to mandatory vaccination for the coronavirus
Show Petition Text
1081803 have signed the petition.
Let's get to 1100000!
Thank you for signing this petition!
Add your signature:
Show Petition Text

“The experts are liars,” Renz said. “We either become responsible for our futures or everything is lost. And that’s where but that’s where it has to be. Right now they’re moving us towards communism, towards Marxism, towards top-down control of everything.”

Asking concerned Americans to “pray for our country and pray for the warriors fighting this fight,” Renz urged people to engage in protests against COVID-19 “vaccine passports” like those which have taken place in Greece, France, Italy, and other countries.

“We need to say no. We need to stand up. You need to join the organizations that are fighting this and you need to be active in them. This can’t be a passive thing. If you want your rights, you have to fight for your rights. And if you don’t fight for them, they’ll be gone. “

“There’s a lot of people that are not going to and will not ever get this vaccine,” Renz said. “The pessimistic vision is that we end up having civil unrest over this. I don’t know that that’s going to happen. I pray that it doesn’t. Optimistically, I believe that we fight this fight, we win this fight, we regain our freedom, and the bad guys go where they belong; which is in jail for a very long time.”