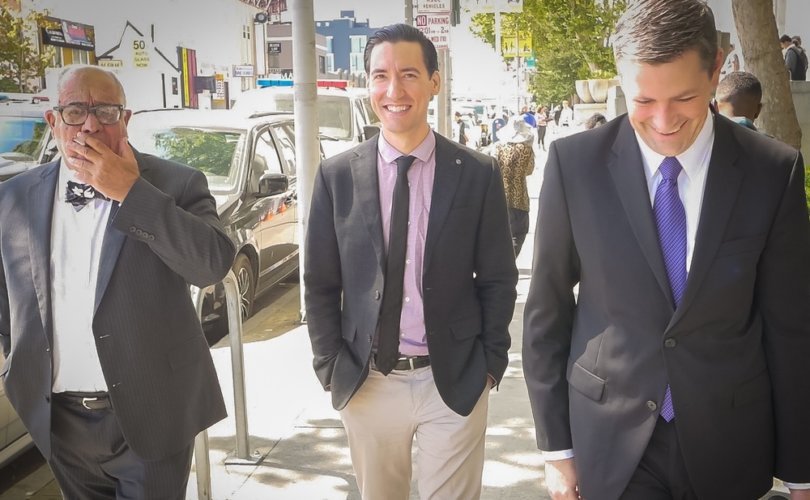 Dr. Theresa Deisher, an expert in stem cell research at Stanford University, is set to testify for the defense Wednesday.

But Deputy Attorney General Johnette Jauron asked Daleiden on cross-examination Monday if Deisher was party to the undercover operation that led to his and Sandra Merritt’s criminal prosecution.

Daleiden and Merritt of the Center for Medical Progress (CMP) are charged with 14 felony counts of illegal recording in connection with undercover videos CMP released in 2015 that exposed Planned Parenthood’s trafficking in aborted baby body parts. Originally they were charged with 15 felony counts, but one of those charges was dropped Friday.

Daleiden testified that he consulted Deisher only about the science of stem cell research, and that she was not privy to his covert investigation.

In earlier testimony, Daleiden said he asked Deisher and other experts whether a 2012 Stanford study in which aborted baby hearts supplied by StemExpress that were perfused in a Langendorff apparatus would require that the hearts be beating.

“Dr. Deisher told me the fetus would have to be alive at the time the organs were harvested” for use in the Langendorff apparatus, he told the court.

In light of Jauron’s questions, Judge Christopher C. Hite told defense counsel Tuesday that Deisher might need to consult a lawyer regarding her testimony, since the attorney general had raised the possibility of a prosecution against her.

“I believe this is being done to intimidate the witness.”

Horatio Mihet of Liberty Counsel, a lawyer for Merritt, also blasted the “ridiculousness” of the suggestion Deisher needed a lawyer.

Hite, however, told them that he couldn’t “ignore that they may or may not prosecute” and that it was within his discretion as a judge to counsel Deisher to seek legal advice.

When Deisher was sworn in as a witness just before the court adjourned on Tuesday, the judge told her he had information that “would compel me to advise you you have the right to seek an attorney.”

It is not clear at this time if Deisher has done so.

Nicolai Cocis, a California attorney who is representing Merritt, excoriated the move.

“Essentially the attorney general is threatening a critical witness with prosecution if she testifies,” he told LifeSiteNews.

“They think that David and she conspired,” Cocis said. “But they haven’t talked to her directly.”

“If I, as a defense lawyer, threatened a prosecution witness the way they are threatening our defense witness, I would be facing criminal charges,” he added.

Jauron asked Daleiden on cross-examination Tuesday about Deisher being listed as one of his project consultants in his January 2013 proposal for an in-depth undercover investigation into the illegal trafficking in aborted baby body parts.

Deisher was “listed in my project for donors as one of my experts in stem cell research,” Daleiden said.

“She, in fact, consulted with you in anticipation of your investigation,” Jauron said.

Daleiden replied that during the time he was preparing himself and his investigative team for the undercover operation, he asked Deisher scientific questions to be thoroughly conversant with the stem cell research and fetal tissue procurement field.

He testified that he met Deisher in 2010, and talked to her on the phone about four times a year from 2010 to 2014. He had “a couple more detailed” discussions with her about “some of the conversations” he and Merritt recorded in 2014 before the videos were released.

He believed Deisher was provided with some videos through defense counsel for her role as an expert witness in the case, Daleiden told the court.

Jauron asked Daleiden if he paid Deisher, and he said no.