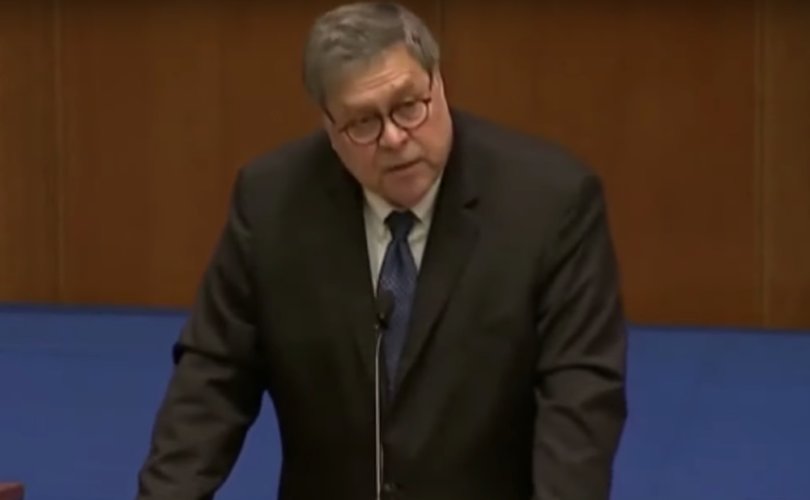 December 15, 2020 (LifeSiteNews) – U.S. Attorney General William Barr will be departing the Trump administration on December 23 amid growing dissatisfaction with his job performance from President Donald Trump.

“As discussed, I will spend the next week wrapping up a few remaining matters important to the Administration and depart on December 23rd,” Barr wrote in a letter to the president, praising Trump for “forg(ing) ahead with a positive program for the country” in the face of “relentless, implacable resistance.”

Trump touted his “very good” relationship with Barr, whom he said “has done an outstanding job,” while announcing that Deputy Attorney General Jeff Rosen will take over as Acting Attorney General in the interim.

The president’s warm comments contrasted sharply with comments he made about Barr just days earlier, stemming from the revelation that Barr directed the Justice Department not to publicly reveal a federal tax and money laundering investigation into former Vice President Joe Biden’s son Hunter until after the presidential election, ostensibly to avoid the appearance of trying to sway the presidential election:

IF Biden gets in, nothing will happen to Hunter or Joe. Barr will do nothing, and the new group of partisan killers coming in will quickly kill it all. Same thing with Durham. We caught them cold, spying, treason & more (the hard part), but “Justice” took too long. Will be DOA!

Why didn’t Bill Barr reveal the truth to the public, before the Election, about Hunter Biden. Joe was lying on the debate stage that nothing was wrong, or going on – Press confirmed. Big disadvantage for Republicans at the polls!

In fact, the department’s silence helped sway the election in the opposite direction by enabling the Biden campaign and the media, which worked aggressively to suppress the allegations against Hunter, to claim the story was false.

“Law enforcement is tasked with investigating criminality, not with assessing how their work will shape public perception during an election,” National Review’s David Harsanyi wrote. “Rather than following process, bureaucrats are now making investigatory decisions that could easily be construed as helping politicians who are either their boss, or their future boss.”

“If the DOJ’s argument is that Hunter was so close to Joe that an investigation might have affected his father’s chances, then, well, that’s an important enough relationship that I think voters ought to know about,” Harsanyi continued. “Shouldn’t they be aware of the prospect of corruption?”

During his tenure as Attorney General, Barr won praise from conservatives for his support of religious liberty and eloquent articulation of conservative principles. But conservatives were also disappointed by his seeming inaction on long-running scandals, including the fact that nobody was ever prosecuted for the Obama administration’s spying on the Trump campaign.