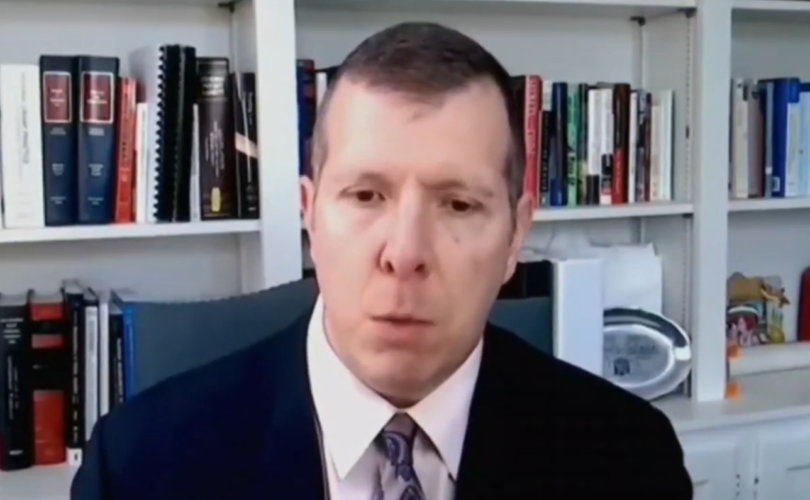 TUCSON, Arizona (LifeSiteNews) — Attorney Thomas Renz blasted hospitals as putting profits before patients by recategorizing flu patients as suffering from COVID-19 “because there’s a whole bunch more money in it for the hospitals if you call it COVID.”

Renz, an Ohio-based lawyer, is lead attorney in several high-profile cases against federal agencies related to fraud and violations of medical freedom rights. He is a featured speaker at the Truth for Health Foundation’s fourth conference on September 22, the focus of which is medical freedom.

Dr. Elizabeth Lee Vliet, M.D., the CEO of the Truth for Health Foundation, noted that Renz has been working alongside numerous families who have been denied access to life-saving healthcare and who have effectively been placed in “prisons of COVID wards,” being forcibly separated from their loved ones after requesting treatment protocols like that offered by America’s Frontline Doctors.

“What we’ve been seeing is that America’s jails have more visitation rights than COVID patients in America’s hospitals,” Vliet said. “This is unconscionable.”

Explaining the full scope of the widespread “medical tyranny,” Renz said the degree of deadliness associated with the novel coronavirus has been exaggerated, describing the overarching narrative thereof “a lie,” and showing that financial incentives have driven mass misdiagnoses of flu cases in favor of COVID.

“If you want to understand what’s happening in the hospitals, you have to start with understanding what’s happening more broadly from the beginning,” Renz said. “This is a disease that we know to be roughly as dangerous as the seasonal flu.”

Renz noted that “the seasonal flu kills lots of people in a given year,” and that it is not uncommon to have 100,000 people or more die from flu globally. “But last year was interesting,” he added, “because according to CDC statistics, there could have been well over two hundred and fifty thousand flu deaths.”

The reason behind the upsurge in possible flu deaths can be explained, Renz stated, by the similarity in expressed symptoms of both flu and COVID-19. “When you get diagnosed with the flu, your symptoms are identical to that of COVID. So, what they do is instead of calling it the flu and then treating the flu — like we historically would have — they call it COVID, because there’s a whole bunch more money in it for the hospitals if you call it COVID.”

Hospitals are rewarded with a 20 percent reimbursement bonus “on anything COVID-related,” Renz explained, including the prescription of remdesivir, an experimental antiviral drug once tested on Ebola patients, but swiftly dropped after 50 percent of trial participants died.

Renz noted that remdesivir has been linked to kidney failure, after which “it was pulled from trials, from clinical trials in the past, because it was killing too many of the patients who were taking it. It is a dangerous, dangerous drug. It’s not safe. It’s not effective.”

Despite numerous problems with remdesivir, including increased hospitalization and liver injury being tied to use of the drug, the U.S. Food and Drug Administration (FDA) approved the medicine for therapeutic use in COVID-19 patients.

The lawyer stressed that doctors have therefore been told they have to diagnose “anything that could be COVID” as such, “whether it’s COVID or not.”

The result of this indiscriminate practice, according to Renz, has been to misdiagnose influenza “hundreds of thousands of times.”

One common ailment associated with seasonal flu is pneumonia. “If it’s untreated, that pneumonia then kills you in many cases … [but] they don’t want to treat this. They don’t want to do anything with this,” Renz said.

Thus, if someone were to contract the flu, “more times than not” the hospital will say they have COVID, Renz said, at which point many people are simply being sent home without treatment. “Finally, you’re just so sick that they have to admit you,” he added, explaining that by this time, “you’re as likely to come out alive as dead. That’s what we’re seeing over and over again.”

Many doctors are also forbidding supposed COVID patients from seeing their families if they refuse potentially fatal treatment plans like intubation and remdesivir. “As soon as you contest it [hospital treatment plan] in any way, shape, or form,” Renz related, “[if] you ask them about ivermectin” the doctors often will “not only not let your family come to see you, but they won’t even listen to your power of attorney or to your medical wishes.”

Instead, “when you say, ‘I don’t want to take remdesivir, I won’t take intubation’ … They come in, they stand at the end of your bed and scream at you about the fact that you’re going to die.” “I’ve got hospital after hospital, story after story,” Renz said, “and it’s not every patient and it’s not every hospital. But if that happens once, it’s too much and it’s happened many times. It’s happening way too often.”

Renz revealed that medics have been “harassing” patients, such as Veronica Wolski, who died in a Catholic hospital after being denied basic care and treatment, which he described as “torture.”

“These people are being tortured,” he continued, adding that by the time an attorney is contacted, they “can’t do anything.” “I hate to tell you that, but the patients die more times than not because they’re not treating the patients, they’re not doing anything.”

In fact, he explained that even after a patient has voiced protest against receiving remdesivir, for example, that some hospital staff in Ohio, where Renz is based, have been ignoring that instruction.

“That is a battery in Ohio, that is a crime,” he said, “it is absolutely a crime in Ohio and probably in most other states.”

Many patients have been restricted from receiving ivermectin, described by some as a “wonder drug” regarding its effectiveness at mitigating the effects of COVID, despite the National Institutes for Health (NIH) having listed the medicine “as an investigatory drug for COVID-19 … it’s right next to remdesivir,” Renz noted. He added that the American government has been prescribing ivermectin to illegal immigrants, yet strongly discouraging its use in hospitals for ordinary American citizens, incentivizing other therapies.

“This is a war on American citizens,” he said. “It’s not my doctor’s job to say you can’t have this. We’re not asking for some bizarre thing,” Renz stated, noting the case of Uttar Pradesh in India, where the government effectively “eradicated” the virus using ivermectin.

Furthermore, the attorney argued that being denied healthcare rights or being forced into taking unwanted medication is tantamount to “being in prison.”

“I am begging and pleading with everyone on this: If you are within reach of a phone, grab it, call your state rep, call your local reps, call whoever you can call … Get active, get organized, get involved. It’s going to take a long time through the courts, we’re trying, and we’ll get there, but we need you to be active, we need to be involved and we need you to help us. God bless you all.”