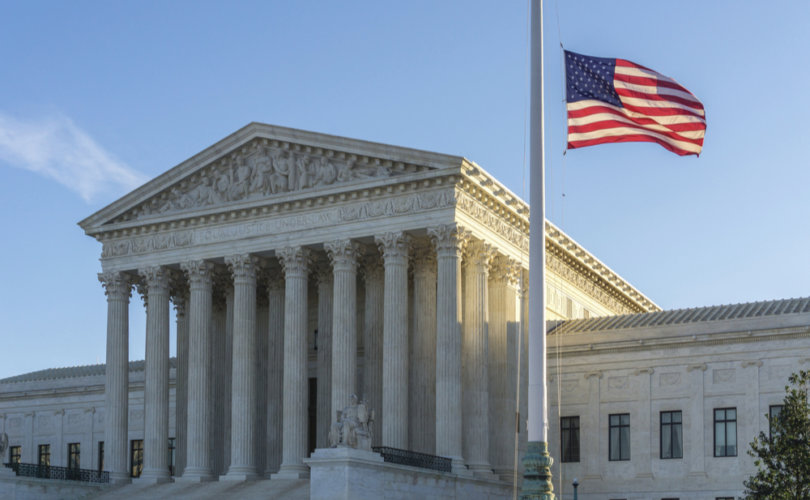 (LifeSiteNews) — The attorney who will argue against the “constitutional right” to abortion in the monumental Dobbs v. Jackson Women’s Health case in the U.S. Supreme Court next month had previously clerked for staunchly pro-life Justice Clarence Thomas and served in the Trump administration’s Justice Department.

The U.S. Supreme Court had announced in May it would hear the case, which concerns Mississippi’s HB 1510 law banning abortions later than 15 weeks gestation for any reason other than physical medical emergencies or severe fetal abnormalities.

The Supreme Court is expected to address the legality of the current precedent for legalized abortion when it hears the Dobbs case. A deluge of amicus briefs have called upon the Court to immediately overturn both Roe v. Wade (1973) and Planned Parenthood v. Casey (1992), the two landmark cases which established and affirmed the “constitutional right” to pre-viability abortion throughout all 50 U.S. states.

Pro-life and pro-abortion advocates alike have recognized Dobbs v. Jackson as having the potential to overturn existing abortion precedent, allowing states to impose broad restrictions or even fully outlaw abortion.

As the attorney representing Mississippi, Stewart will champion his state’s contention that the prior Supreme Court decisions establishing a “right” to abortion were “egregiously wrong” with “no basis in text, structure, history, or tradition.”

“It’s the most aggressive position he could have taken in defending Mississippi’s law, which bans nearly all abortions after 15 weeks of pregnancy,” the Washington Post contended in a November 9 article highlighting Stewart’s career and involvement in the Dobbs case.

Josh Blackman, a professor at South Texas College of Law Houston and a conservative legal commentator, told the Post that Dobbs “is going to be a very significant case, not just for [Stewart’s] career but for the conservative legal movement.”

“There’s an entire movement that’s behind him and supporting him,” Blackman said.

A graduate of Princeton University and Stanford Law School, Stewart wrote a paper during his senior year at Princeton arguing that U.S. presidents should spend more time talking about the issue of abortion. The Post suggested Stewart “seemed to prefer reasoned, dispassionate debate, whether about abortion or the death penalty or anything else.”

According to the Post, “The paper concluded with his ‘hope for change’ on national polarization.”

During his tenure in the Trump administration Stewart represented the federal government in a case against a 17-year-old illegal immigrant who sought to obtain an abortion in Texas.

While a district court ultimately ordered that the girl be permitted to obtain an abortion in the U.S., Stewart defended the Trump administration’s policy of refusing to “facilitate” abortions for unaccompanied minors who had crossed the southern border illegally and been taken into federal custody.

It’s unclear how closely Stewart’s personal opinions about abortion align with those of staunchly pro-life Justice Clarence Thomas, for whom he clerked from July 2015 to July 2016. Relatively unknown in pro-life circles to date, the Mississippi solicitor general has not publicly discussed his personal views about abortion.

In 2020, Thomas argued that Roe v. Wade “created the right to abortion out of whole cloth, without a shred of support from the Constitution’s text.”

“Our abortion precedents are grievously wrong and should be overruled,” Thomas wrote in a fiery dissent to a decision blocking a Louisiana law requiring basic medical precautions in the event of abortion complications.

“The idea that the Framers of the Fourteenth Amendment understood the Due Process Clause to protect a right to abortion is farcical,” Thomas said.

The state of Mississippi, represented by Stewart in Dobbs, appears to agree with Justice Thomas’ assessment of the standing legal precedent for abortion.

In July, months after Stewart’s appointment as solicitor general, the state of Mississippi filed a brief severely condemning the prior rulings establishing a “right” to abortion, explicitly asking the Court to overrule both Roe and Casey.

In the brief — in which Stewart is named as the counsel of record — Mississippi argued that “Roe and Casey have inflicted significant damage,” and that “[t]he stare decisis case for overruling Roe and Casey is overwhelming.”

Stewart will defend Mississippi’s stance requesting that the Supreme Court overturn the prior decisions in both Roe and Casey when oral arguments begin in the Dobbs v. Jackson case on December 1.

A decision in the Dobbs case is expected next summer.