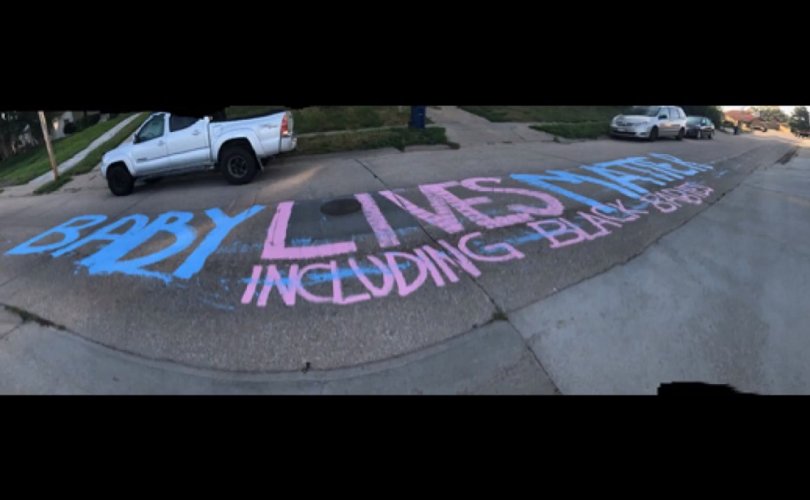 WASHINGTON, D.C. (LifeSiteNews) — The U.S. Court of Appeals for the D.C. Circuit heard arguments today brought by Alliance Defending Freedom (ADF) on behalf of two pro-life organizations that argue they were illegally stopped from chalking or painting a pro-life message on the sidewalk or streets of Washington, D.C. under uneven enforcement of a city vandalism ordinance.

D.C. Mayor Muriel Bowser allowed artists to paint “Black Lives Matter” on a public street on June 5, 2020 in response to the killing of George Floyd by Minneapolis police officers in May 2020. The city also allowed activists to paint “defund the police” that summer.

The case, The Frederick Douglass Foundation v. District of Columbia, comes two years after D.C. police arrested activists with Students for Life of America for chalking “Black Preborn Lives Matter” outside a Planned Parenthood on August 1, 2020. The charges were later dropped.

The only difference between D.C.’s approval of the BLM mural and its rejection of the pro-life message was the word “preborn,” ADF attorney Erin Hawley argued Wednesday.

“The police gave plaintiffs verbal permission to chalk their message,” Hawley argued in front of the court. Yet there were a number of police officers on hand who arrested the two students. This represented a “reversal of policy” on behalf of the city, Hawley argued.

The mayor can “absolutely” support different policies, personally, Hawley said, but her political beliefs cannot prevent other people from sharing their views. D.C. officials “adopted as its own” certain political beliefs while not allowing others to share their views in the same forum, Hawley argued.

Even though there was not an official written “policy” in place from the city, the city had a “pattern or practice” of treating pro-life views different than Black Lives Matter and defund the police painting and chalking, Hawley argued.

An attorney for D.C. defended the city’s enforcement of its speech policies and denied there was uneven application of the vandalism ordinance.

Carl Schifferle argued that the mayor was not personally involved in the enforcement decisions and the pro-life groups had not proved their argument that they were singled out because of their views.

He also argued that “only the mayor” and sometimes the “chief of police” can be the policymaker and that the pro-life groups must establish that one of those people made the decision to shut down their chalking and deny them permission to paint.

ADF said in a statement before the hearing that D.C. officials must protect the free speech rights of all individuals.

“Washington officials can’t censor messages they disagree with. The right to free speech is for everyone, and The Frederick Douglass Foundation and Students for Life should be able to exercise their constitutional freedom to peacefully share their views the same as anyone else,” Hawley said in a statement before the case was argued. “We urge the D.C. Circuit to rule in favor of free speech and to allow our clients’ voices to be heard as they engage in important cultural and political issues of the day.”

A court decision is expected in the new few months.