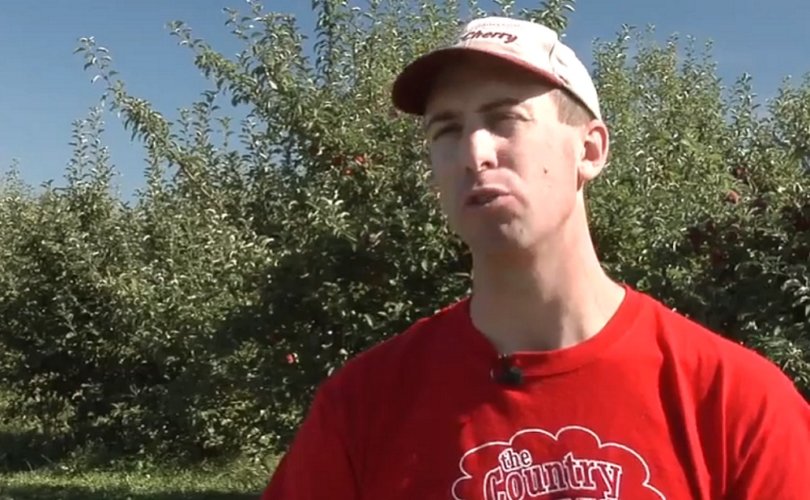 Steve Tennes of Country Mill Farms in Michigan.MichiganFarmBureau via YouTube.

KALAMAZOO, Michigan, April 16, 2019 (LifeSiteNews) — Attorneys for a Michigan fruit farmer argued in federal court that officials had unconstitutionally targeted him for his religious beliefs and banned him from a local farmers’ market.

On April 12, attorneys from the non-profit Alliance Defending Freedom (ADF) went before the U.S. District Court for the Western District of Michigan, Southern Division, to request that the city of East Lansing permanently lift its ban that has prohibited farmer Steve Tennes from selling his produce at the local farmers’ market. Authorities in East Lansing, which is home to Michigan State University, banned Tennes and his Country Mill Farms of rural Charlotte, Michigan, specifically because he adheres to the Catholic Church’s teachings regarding marriage when hosting weddings at his family farm venue.

According to the attorneys, Tennes was persecuted for his sincerely held religious beliefs, which an East Lansing city council member called “ridiculous, horrible, [and] hateful.” The council then exiled him from the marketplace until the federal court issued a preliminary order in 2017 that allowed Tennes a temporary return. The East Lansing mayor denounced Tennes, who does not reside in that city, for putting his “Catholic view on marriage” into practice. Other city officials likened Catholic teachings about marriage to those defending racist Jim Crow laws of the South following the Civil War. According to ADF, the city’s position was that it would expel Country Mill Farms until it successfully changed the Catholic beliefs of Tennes and his family.

In an interview with LifeSiteNews, ADF senior counsel Kate Anderson said federal judge Paul L. Maloney took depositions from ADF and the city of East Lansing. Attorneys for the city called for a dismissal of the case, while ADF sought a permanent resolution that would allow Tennes to sell his produce at the market. She expressed the hope that the judge will issue a ruling in favor of her client within the next few weeks. Anderson also noted that it was the same judge who issued a 2017 ruling that temporarily suspended the city’s ban on Tennes. New evidence of official prejudice against Tennes, Anderson said, was presented at the April 12 hearing.

According to an earlier press release, “all Americans should be free to live and speak according to their deeply held religious beliefs without fear of government punishment.”
Contending that the city’s actions are unconstitutional, Anderson said, according to the release, that East Lansing officials changed the policy at the farmers’ market to ban Tennes “because they don’t like his Catholic beliefs regarding marriage.” Anderson told LifeSiteNews the Supreme Court has rejected hostility against religion on the part of government officials, citing the Masterpiece Cakeshop case, in which a Colorado baker faced heavy fines after refusing to make a cake celebrating a homosexual “wedding.” According to the ADF release, ADF attorney John Bursch said, “That is why we are asking the district court to issue an order that permanently prevents East Lansing from unconstitutionally targeting Steve on the basis of his beliefs. The city’s response to Steve’s beliefs reeks of anti-religious discrimination.”

The issue arose after city officials chose a policy to ban farmer Tennes and his Country Mill Farms specifically because he posted on Facebook his beliefs about marriage. Tennes’s Facebook posts of August 2016 were enough for city officials to begin several actions against him and his business. He had been selling at the city farmers’ market since 2010.

In the temporary 2017 order, the U.S. District Court for the Western District of Michigan, Southern Division, wrote: “On the evidence before this Court, the City amended its Vendor Guidelines and then used the changes to deny Country Mill’s vendor application.” It ruled that there was a “substantial likelihood” that Tennes and Country Mill Farm could claim to have been subjected to discrimination on the basis of religion and speech. Following the order, the city provided a license to Tennes in 2018.

ADF attorney Bursch noted that the same religious beliefs that have motivated Tennes to donate thousands of pounds of apples to local food banks inspired him to adhere to the traditional definition of marriage. “Those same beliefs compel Tennes and his employees to treat every single customer with dignity and respect,” Bursch said. He added, “The city’s condemnation of that same faith — not to mention the city’s attempts to change Steve’s beliefs regarding marriage — violate the U.S. Constitution, the most basic notions of religious freedom, and simple common decency.”

The Facebook description on Country Mill Farms’ page says: “Our family farm seeks to glorify God by facilitating ‘family fun on the farm’ and feeding families.” Besides apples, the farm also grows peaches, blueberries, and pumpkins and has a winery.