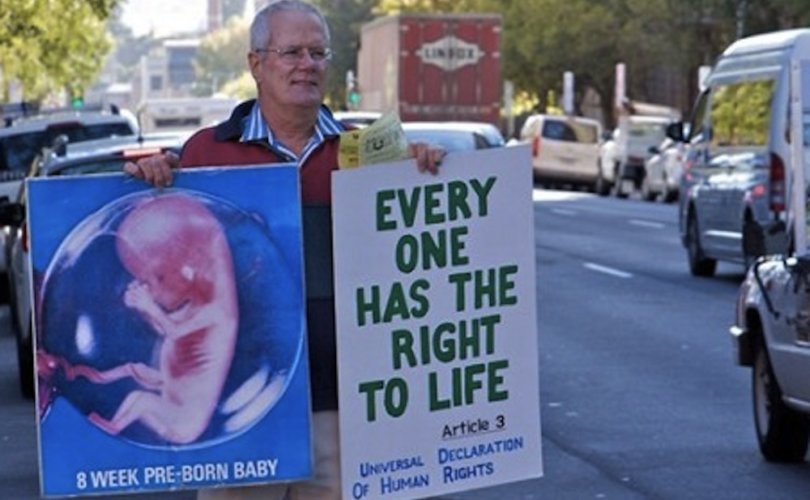 HOBART, Australia, July 28, 2016 (LifeSiteNews) — Longtime Australian pro-life activist Graham Preston was ordered Wednesday to pay a $3,000 fine as the first person convicted under 2013 laws enacted in Tasmania that prohibit protests within 150 meters of an abortion center.

Preston, who lives in Queensland but traveled to Tasmania to protest the new laws that he believes limit freedom of speech, was charged with three counts of engaging in prohibited behavior within an access zone and one count of failing to comply with the direction of a police officer in September 2014 and April 2015 outside a Hobart clinic. He was the first to be fined under the state’s new reproductive health guidelines.

Raymond and Penny Stallard, a retired couple, also were subjected to the charges resulting from the 2015 protest but were not fined by Hobart Magistrate Catherine Rheinberger because they had no previous convictions. They were given a 12-month good behavior bond.

In Preston’s case, Rheinberger said he came to Tasmania with the express purpose of challenging the state’s laws. She also pointed to his previous convictions in her decision to levy the fine.

“I don't intend to pay as I do not believe we have acted wrongly,” Preston said in an email to supporters.

Preston and the Stallards had challenged the Tasmanian “bubble zone” law as unconstitutional based on infringement of their religious freedom and political expression. Charges against Preston in a 2014 case were previously dropped after police determined that he did not commit a crime despite standing within the 150-meter zone.

“Today’s decision undermines the fundamental right to protest, which is an essential part of a robust democracy,” FamilyVoice Tasmania Director Jim Collins said on the organization’s website after the verdict. “Even silent prayerful protest is banned under these draconian laws.”

“Our freedom of speech is under attack from restrictive anti-protest laws that prioritize political ideologies over individual rights.”

Preston has been convicted multiple times in Australia for protesting abortion and was sentenced to eight months in jail in 2012 for refusing to pay government fines that accumulated after years of peaceful protests.

Preston told LifeSiteNews that he will challenge the latest fine, which he was given 28 days to pay but has no intention of doing so.

“Our lawyer is certainly having a good hard look at the very detailed decision,” Preston told LifeSiteNews. “We definitely want to appeal it. It would be a disaster to lose it.”

In June, 75-year-old Vietnam War veteran and retired brigadier Kelly Mellor was fined for a second time under the Australia Capital Territory’s Health Care Amendment Act for praying the rosary before an abortion center in Canberra.

Preston also noted that the Queensland Abortion Law Reform Bill is currently before a Parliamentary Committee, which is scheduled for review on Aug. 26.

“The website is indicating that 1,234 submissions were received and hopefully most are against this terrible Bill,” Preston wrote in an email. “Incredibly, and tragically, the Queensland Nurses Union submission gave full support to this Bill which would allow abortion up to birth for any reason. Unfortunately, there are also quite a few other supportive submissions from medical professionals.”