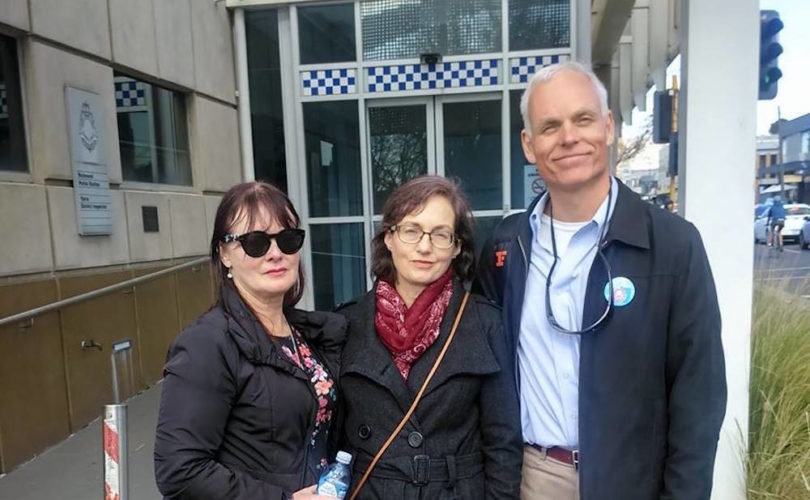 MELBOURNE, Australia, August 31, 2016 (LifeSiteNews) – A Catholic theology student and mother of 13 is the first person charged under the State of Victoria’s new bubble zone law for distributing pro-life material to clients at a downtown abortion clinic.

Kathleen Clubb, 50, wrote on the website devoted to raising funds for her legal defense that she planned to challenge the law, which was passed last year and took effect in May. “I intend to pursue this case to the High Court to prove that the ‘Safe Access Zone’ amendment is unconstitutional because it burdens the constitutional freedom of political communication.”

The law prohibits pro-life communication of any kind within 150 meters of an abortion clinic as well as recording or publishing images of abortuary clients. Violators are subject to up to a year in prison.

During the debates over the measure last year, pro-abortion parliamentarians made false accusations against a local pro-life group that had been active outside Melbourne’s Fertility Control Clinic for more than 20 years without police interference.

Despite claims that the Helpers of God’s Precious Infants were harassing and intimidating women, supporters note that the Helpers focused on praying for mothers and babies and offering assistance.

Clubb said: “I was arrested today for offering help to aborting mothers outside the Fertility Control Clinic in East Melbourne and for seeking to draw the attention of the public and politicians to the issue of abortion and to the totalitarian restrictions being placed on a targeted group of Australians – members of the pro-life movement, especially the Helpers of God’s Precious Infants.”

Clubb said on social media soon after her arrest that she was offering “help to aborting mothers” and wanted to bring attention to “totalitarian restrictions placed on the pro-life movement.”

Australia’s constitution was designed to set up the federal structure when the country became independent and recognizes only a few rights, like that of religion but not those of speech or assembly. However, according to summary provided by the Alberta Human Rights Commission, which puts more importance on freedom from discrimination, courts have recognized an additional right to freely debate political matters. Clubb claims the activity of pro-lifers near abortion clinics is part of the political debate over abortion.

“We believe that the public — and aborting mothers in particular — are not being told the whole truth about abortion and that it is our right to express that belief to them and our elected representatives,” she wrote on the Freedoms Project website, which advocates for an Australian Bill of Rights. “One of the most effective ways to do this is in the immediate vicinity of places like the Fertility Control Clinic.”