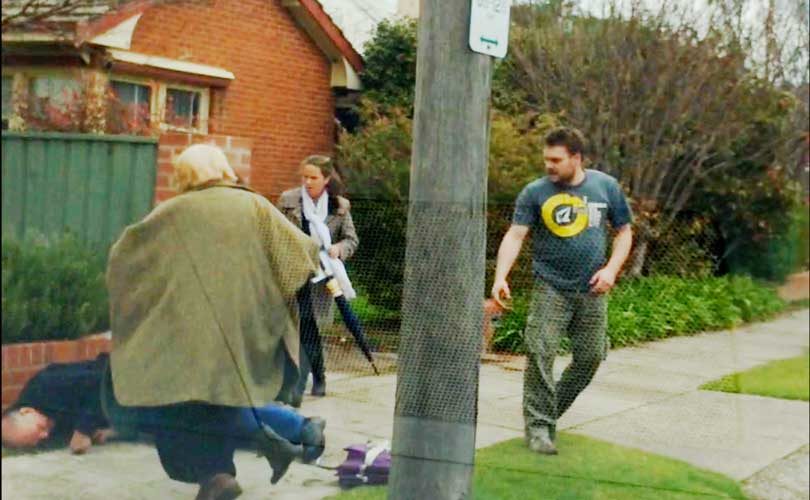 ALBURY, New South Wales, July 6, 2015 (LifeSiteNews) — For 68-year-old Helpers of God's Precious Infants volunteer Greg Cummins the events of last week all happened so quickly and without provocation.  He had seen a young man run across the road with one of their signs while he was further down the street.  The man had also ripped away their wooden A-frame signs featuring the text “pray to end abortion” and “choose life.”  In doing so, he broke the chains securing them to a utility pole on the opposite side of the street to the Fertility Control Clinic in Albury.  Seeing that there were only three or four women there by themselves, Cummins ran there to be with them rather than to have left them on their own.

Cummins told LifeSiteNews that the man “said words to the effect of 'I'm going away and will be back in 15 minutes, and if you're here you'll be in (or 'there will be') a lot of trouble'.  Then he just forgot to wait the 15 minutes and just hit me there and then.”

Cummins considers himself very fortunate to only sustain a fractured jaw.  “As far as I am aware, I never spoke a word to him,” he said.

Onlookers, regardless of whether they support the Helpers or not, were horrified.  Everyone rushed to his aid including current leader of the opposition to the Helpers, Liz Marmo, who can be seen in the last part of the video recording.  “The other people … they might be for us or against us, but they didn't like what was happening.  They didn't like the violent behaviour,” he said.

Anna von Marburg had only just arrived when she saw the man ripping the A-frames away from where they were secured on the clinic side of the road.  “The women there were just trying to hold on to it and he just ripped it out of their hands,” she said.  She then saw him head across the road to the Helpers who were there to pray, three women and one man.

“Greg stepped forward to defend the women because the guy was really fired up and swearing and screaming.  Yelling about how he was going to come back,” she said.

She was scared to get out of the car because of what was going on, and it was then that the alleged assault took place.

She said, “Then I saw him hit the Greg in the face.  Then Greg put his hand up to knock the hand away and Greg stepped back because this guy wound up to punch him.  I couldn't see the whole punch to his face, but you could see him fall backwards.”

Von Marburg then observed the attacker flexing his right hand because he had hurt it when throwing the punch.  The victim was left moaning in pain.

When the police arrived they spoke with the attacker and then let him go.  Von Marburg was shocked that he wasn't arrested on the spot.  A witness who shot the video footage then showed it to the police and it was only then they realized it wasn't the 'self defense' that the 32 year old man had told them it was.

According to the report in the Border Mail, the attacker was arrested later that afternoon and he will face Albury Local Court for occasioning bodily harm.

As a former Vietnam war veteran, the need to be outside the abortion clinics was brought home to Cummins at a recent reunion.  Fifty years ago he had been conscripted to fight in South Vietnam, helping the citizens defend against the threat of communism.  It was because of what he saw and experienced there that he has always felt compassion for the women, children and the whole country.  “It was just ripped apart,” he said.

At the reunion he met a doctor from the South Vietnam military who had wept tears for his country when the Americans and Australians “abandoned them.”  He and his fellow countrymen were left there with tanks and planes but no fuel, guns but no ammunition.  This scenario enabled the communists to “devour” them.

“We just feel the same.  We're in the same position.  We need to stand up for these defenceless people,” Mr. Cummins said regarding the unborn babies.

To him it's a civil rights issue.  “I can understand that people are under stress and they think that they have no other option.  But the babies have no one to speak up for them and they are human beings like us, … they can't speak for themselves.  If good men do nothing (then) evil prevails.  We are there peacefully and we pray silently for all involved.  We're not making judgement on anyone.”

1
Here’s how to stop Google from collecting huge amounts of your data
2
Prophecy: War will break out in Europe after Pope visits Moscow
3
Belgian bishop claims Pope Francis approves of blessing ceremony for homosexual couples
4
Tucker Carlson: Biden admin ‘may have blown up’ gas pipelines in Baltic Sea
5
The simple reason why you should stop using Gmail
Subscribe to Daily Headlines »