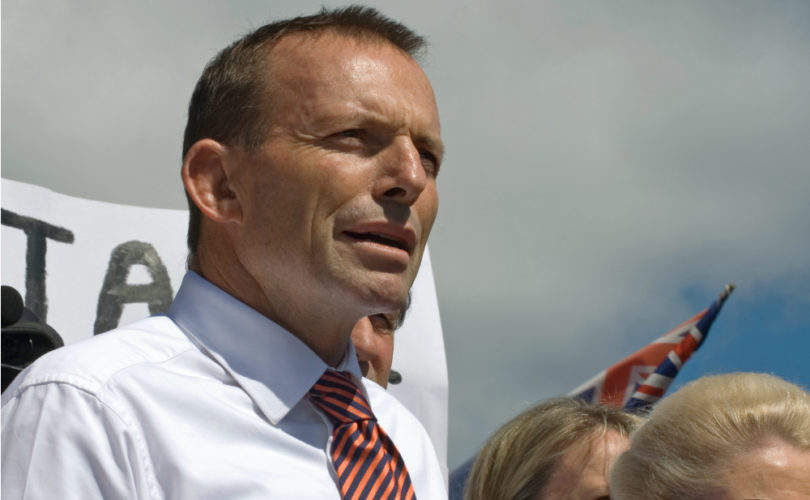 CANBERRA, Australia, September 14, 2015 (LifeSiteNews) – Australia’s pro-marriage prime minister, Tony Abbott, was ousted today, replaced by Malcolm Turnbull and his deputy Julie Bishop after the second party leadership challenge within a year.  Turnbull won the leadership ballot 54-44.  Both Turnbull and Bishop are supporters of gay “marriage,” with Bishop only declaring her position in recent months.

One of the reasons given for the leadership challenge was the fact that the government lost 18 successive opinion polls.   It's not clear to what degree those poll results were a reflection of the Australian mainstream media's aggressively negative coverage of Abbott.  The Australian media have been strongly activist in the cause of legalizing same-sex “marriage” in Australia and see Abbott as the obstacle to achieving this goal.

The prime minister had also suffered from well-timed leaks, including the claim that there was an impending cabinet shuffle.  This, in addition to an election less than a year away, would also have contributed to making MPs in marginal seats nervous enough to change their allegiance to Malcolm Turnbull.

Speaking to the media, Prime Minister-designate Turnbull praised Tony Abbott for the leadership he had borne, stating “the burden of leadership is a heavy one.”

“This has been a very sobering experience today, I'm very humbled by it,” he added.

Julie Bishop also praised Abbott for his service to the party and the effort he put in to winning the previous federal election.