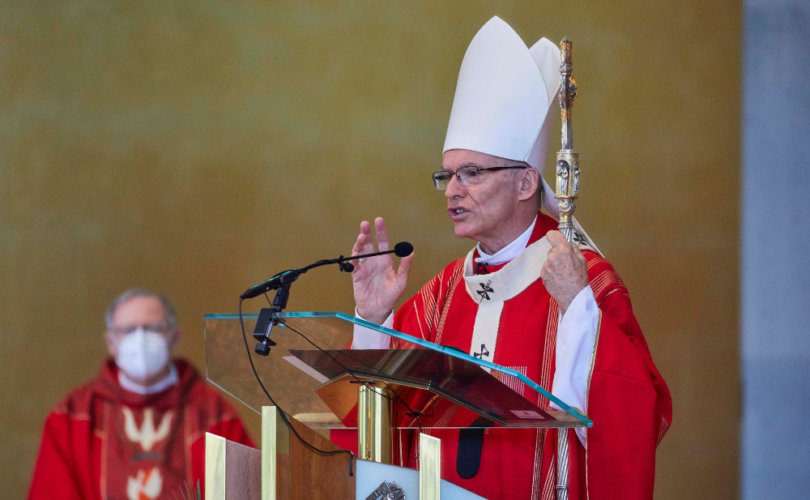 Help Fr. Rowe by donating to his LifeFunder.

PERTH, Australia (LifeSiteNews) – The Archbishop of Perth, Timothy Costelloe, has released new restrictions on the traditional Mass in his archdiocese, severely impacting the long-standing traditional parish of St. Anne’s which has been fighting for its survival for years after the Archbishop moved against it.

New directives from Archbishop Costelloe regarding the future of the traditional Mass were issued September 19, in line with Pope Francis’ restrictive measures outlined in his 2021 motu proprio Traditionis Custodes. The measures, effective immediately, limit the celebration of the traditional Mass to just two churches: St. Anne’s at Belmont, and a church at Kemlscott.

Priests wishing to offer the ancient liturgy are required to obtained permission from the archbishop, and such permission only applies within the archdiocese.

The general rules forbid the traditional Mass from being offered apart from on Sundays or Holy Days, but permission can be obtained from Monsignor Michael Keating, who has been appointed by the archbishop to oversee the new directive.

However, Costelloe’s decree notes that even for Sundays and Holy Days, all priests wishing to offer the ancient liturgy must seek permission. Before this is granted, they will be required to submit to the conditions laid out the Archdiocese of Perth, which are formalized in a written declaration. These conditions take the form of the prescriptions outlined in Traditionis Custodes: declaring the Novus Ordo to be the “unique expression of the lex orandi of the Roman Rite,” and accepting the legitimacy and validity of Vatican II.

However, even if clergy apply and complete the binding declaration, no permission to celebrate the traditional liturgy is guaranteed, and permission could ostensibly be withdrawn.

At the heart of the collateral damage which will spread following Costelloe’s decree is the traditional church of St. Anne’s, which has gone from strength to strength since its founding over a decade ago.

LifeSite has reported on the thriving, traditional community at the church of St. Anne’s, which in recent years has become the center of a legal battle after Costelloe moved to shut down the church and take possession of its buildings.

— Article continues below Petition —
Stand with pro-life Catholic dad of 7 raided by Joe Biden's FBI
Show Petition Text
6786 have signed the petition.
Let's get to 7500!
Thank you for signing this petition!
Add your signature:
Show Petition Text

In 2008, Perth’s former ordinary, Archbishop Hickey, allocated the unused church of St. Anne’s to the Latin Mass community in Perth, stating in writing that it would be the “permanent location” for the Latin Mass. Appointing Fr. Michael Rowe as the parish priest of the “quasi-parish” of St. Anne’s in 2008, Hickey then formally appointed him in writing as rector of the church in 2009, granting him full faculties of a parish priest.

Yet in 2017, five years after the arrival of Archbishop Costelloe in 2012, St. Anne’s came under restrictions from the new prelate. The parish priest of neighboring Cloverdale parish was formally appointed the parish priest of the territorial Novus Ordo parish of Belmont, in which St. Anne’s is located. Following a secret meeting between the Archbishop and diocesan clergy, to which Fr. Rowe was not invited, Costelloe merged St. Anne’s, informing Fr. Rowe that Cloverdale parish owned St. Anne’s church and land.

Furthermore, Fr. Rowe was told, not by Costelloe, that Cloverdale parish planned to sell St. Anne’s, thus making the community homeless. The traditional community have spent hundreds of thousands of dollars on the church.

Numerous legal appeals to both civil and canonical courts have been rejected or ruled against Fr. Rowe and St. Anne’s community.

With the latest restrictions from the Archbishop now affecting the Mass directly, in addition to the moves he has already made against the church buildings, the future of St. Anne’s remains uncertain.

In a brief address delivered to the congregation on September 25, Fr. Rowe spoke of the “heartache and distress” which Costelloe’s latest decree had caused.

Parishioners of St. Anne’s sent over 400 letters to the Archbishop, petitioning him not to implement the restrictions on their spiritual life, via his curtailing of the Mass. As noted by Fr. Rowe, Costelloe has not taken up repeated offers to come and visit the thriving community.

Costelloe wrote that it was his “intention to follow the Holy Father’s intention that those who seek to celebrate the Mass using the Roman Missal approved by Pope John XXIII in 1962 are provided for in our archdiocese.”

However, under the terms of his decree, the congregation of St. Anne’s is left at the whim of the archdiocese, with permission essentially required for every Mass offered in the ancient rite at the church.

By ordering priests to file a request to say the traditional Mass, the Vatican – and by extension Archbishop Costelloe – holds complete power over the future of the congregations such clergy serve.

The rector of St. Anne’s has been fighting for a number of years to preserve the future of the congregation and the traditional community ever since Archbishop Costelloe merged St. Anne’s with the parish which planned to sell the land.

This legal battle has been conducted in civil courts, after the Vatican’s Congregation for Clergy refused to intervene, referencing that the appeal was too late — a technicality of canon law — by being outside of the 10-day time limit.

After fighting for the future of St. Anne’s in the courts for several years, Fr. Rowe received news that the courts had rejected his final challenge to the Archbishop’s attempt to take the church of St. Anne’s away from the congregation.

The Latin Mass is under severe threat in Perth
Fr. Rowe needs our support today.

He had appealed to the High Court of Australia, asking for them to hear his case, with the hope that the High Court would overturn the earlier rulings in the same way it did for Cardinal George Pell in 2020.

The court delivered the ruling only days before Costelloe issued his restrictive measures on the traditional liturgy, landing St. Anne’s with a double assault from the courts and the Archdiocese in a matter of days.

Fr. Rowe is now appealing for donations to compensate costs, measured in thousands of dollars, which have been incurred during the court proceedings.

LifeSiteNews is assisting with this by organizing a LifeFunder for Fr. Rowe.