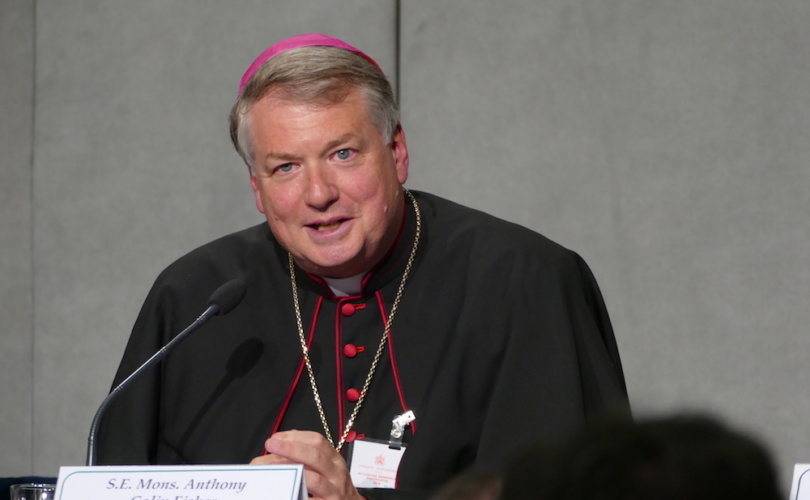 VATICAN CITY, November 5, 2018 (LifeSiteNews) – There is a real danger in allowing synods to drive the Church’s doctrinal practice, an archbishop involved in the Vatican’s Synod on Youth has said.

There were numerous issues with how the recently-concluded synod was carried out, and its final document was not clear on Church teaching, Archbishop Anthony Fisher of Sydney, Australia, said, noting the concept of “synodality” appeared in it as if out of nowhere.

The final document is too long and convoluted in parts, the archbishop said, and its preparation was rushed.

The archbishop also cited the call for the final document to be read in “complementarity” with the working document, along with translation difficulties and non-Italian speaking synod fathers being rushed to vote on something that had simply been read to them.

Additionally, Fisher said nearly all of the synod fathers felt as though they were “shut down” from speaking after they had given their synod interventions.

The Vatican Synod on Young People, Faith and Vocational Discernment ran from October 3-28. It carried with it concern that it would be commandeered as a vehicle for normalization of homosexuality in the Church, similar to how the Synod on the Family played out regarding a weakening of Church teaching on marriage.

Both synods had a nod toward diverting authority from the papacy and the Vatican to episcopal conferences, with the call for “healthy decentralization” at the Synod on the Family. Inserted in the Youth Synod final document was “synodality,” a recurrent theme broached by Pope Francis.

The final document, and now the working document given the former’s unconventional statement that it should be read in light of the latter, are especially concerning, after Francis’s release of an Apostolic Constitution just prior to the Youth Synod aiming to augment the magisterial force of the final document generated by a synod.

Fisher, a Dominican, was on the Youth Synod’s information commission and spoke with the National Catholic Register’s Ed Pentin about the Synod on Youth on its closing day. He said the Youth Synod was good in some ways, but also detailed several problems.

Pentin asked, “Do you think there’s a danger with these synods, that they can be vehicles for heterodoxy?”

“Yes, a real danger,” Fisher replied. “This is not the way to make doctrine.”

“If you are preparing a Vatican document on a topic, you get a group of highly qualified theologians or experts in that area to do drafts and redrafts,” Fisher told Pentin. “You get others to critique it. You ultimately bring it to the bishops of the CDF.”

Writing doctrine on the run

The pope can contribute during the process and has final approval that would give the document real authority, he said, but this takes time, typically several years, before a document is “mature enough for publication as the faith of the Church.”

“But in this synod,” said Fisher, “we were writing doctrine, as it were, on the run – with respect to synodality, in less than a week.”

The final document itself had some beautiful parts, he said, but these were “often followed by more tiresome secular-sociological analysis.”

The working document does not have the authority of the bishops

The final document is “a significant improvement on the instrumentum laboris,” or working document, he said, and is “significantly the work of the bishops.” Many bishops were surprised by the language of having to read them both together, he added, because the very nature of working and final documents is that the final document replaces the earlier ones.

“The working document was compiled by synod bureaucrats and does not have the authority of the bishops,” the Australian archbishop said.

Asked about there not being much reference to the moral teachings of the Church in the final document, Fisher said it was “disappointing that the document’s drafters were so diffident about mentioning the moral teaching of the Church,” because “so many of the young people’s concerns were moral and spiritual at heart.”

“Some of us tried to get in more about the Church’s teachings on the natural law, moral absolutes, prudence[,] and the operation of conscience, and on specific issues such as life and sex, and there were improvements,” said Fisher. “The final document would have been more helpful if it was clearer on such things.”

Previous pontificates were ‘too intellectual, too catechetical’?

Fisher attributed the absence of Church principles in the synod documents to a desire to respond to “the perceived preferences of contemporary youth culture.”

The other factor prompting this, said Fisher, was a departure from the teaching of previous popes, specifically “an implicit view that the previous two (or more) pontificates had been too intellectual, too catechetical, too determinative, and that this synod should mark a shift that has been occurring from the head to the heart, from speculative and moral intellect to affective discernment.”

Fisher noted that the term “LGBT” was gone from the final document, and the passage on homosexuality did contain language that follows Church teaching.

However he said, “Some of us might have liked it clearer and stronger – for instance, I don’t think the final document is clear about the goal of generating children. But it’s significantly better than the working document and the draft final document.”

The archbishop did not comment on the final document’s inclusion of the term “sexual inclination.”

Synodality ‘just appeared, as if from nowhere’

Pentin asked Fisher how so much material on “synodality” got into the final document.

Synodality is typically understood as a decentralization of the Church and the magisterium away from the papacy and the Vatican to local churches.

He cautioned against the final synod document being given magisterial weight given the rushed way it was prepared.

“And it should be clear that the working document and the draft final document cannot share in the magisterium because they are not exercises of the pastors of the Church when teaching and governing,” said Fisher. “Such documents may be very well-informed because of the theologians and sociologists and arguments behind them, but they are not the conclusions of the pastors of the Church.”

Fisher said the Church “has to improve its act linguistically” and be sure everyone has texts in the meeting’s several languages if it’s going to have international meetings. He said the fact this was not done at the Youth Synod along with other timetable problems with the timetable issues with synod rules “left some feeling manipulated.”

The archbishop clarified that it was not just more traditionally-minded bishops who were shut down; rather, they all were. Once they’d given their initial short speech in the synod hall it almost impossible to get another hearing in the assembly or in other free discussions.

When it came to voting, each paragraph was read so fast the translators struggled to keep up, and synod fathers could not take notes in their own language.

“So we were not always sure what we were being asked to vote Yes or No to,” the prelate noted.

“And then voting on it in a matter of minutes, and under terrible pressure of time, with no opportunity for further amendments,” said Archbishop Fisher. “To me, that’s not the way to make doctrine.”

Synod fathers were suspicious of the use of “synodality” given how it has played out in the Anglican church and Eastern Churches, he said.

“What they were wary of, I think, is the way synods might be manipulated today, swept up by the fashions of the age,” said Fisher. “They were wary, too, of all the vague talk of ‘synodal style’ and ‘synodal discipleship’ and the rest, some of which has survived in the final document; that can mean all sorts of things in different mouths and ultimately be very divisive.”