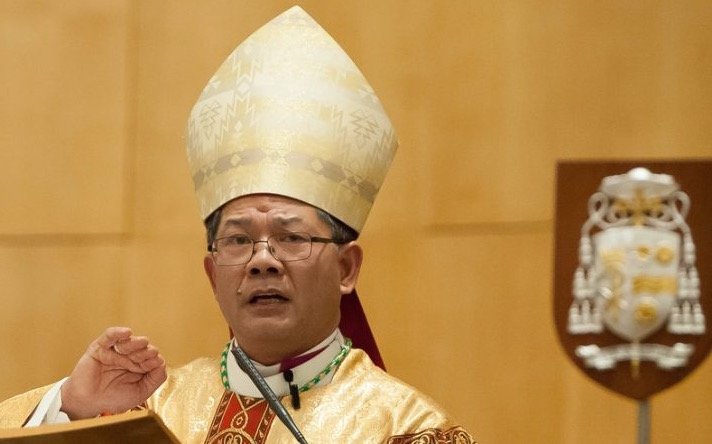 AUSTRALIA, September 9, 2016 (LifeSiteNews) — An Australian Catholic bishop appointed by Pope Francis says he is simply following the pope’s lead in calling on the Church to end “oppression” against gays and lesbians caused by “defin[ing] their sexuality as ‘intrinsically disordered.’”

“It seems to me that the Pope has more than moved away from the approach of condemnation and judgment,” stated Bishop Vincent Long Van Nguyen of the Catholic diocese of Parramatta during a lecture in western Sydney on August 18.

“[Pope Francis] has refocused on the proclamation of God’s love for the poor, the vulnerable and the marginalized; […] he has committed the church to the way of engagement, affirmation, and compassion, which is at the heart of the Gospel,” he added.

Bishop Long called being “inclusive” “one of the greatest challenges the Church faces today.”

It won’t wash with young people, especially when we purport to treat gay people with love and compassion and yet define their sexuality as ‘intrinsically disordered.’ – Bishop Vincent Long Van Nguyen

“[T]here must be space for everyone, especially those who have been hurt, excluded or alienated, be they abuse victims, survivors, divorcees, gays, lesbians. … The church will be less than what Christ intends it to be when issues of inclusion and equality are not fully addressed,” he said.

Specifically, Bishop Long said that for the Church to be more inclusive and more attractive to young people it must put away discriminatory and judgmental language.

“We cannot talk about the integrity of creation, the universal and inclusive love of God, while at the same time colluding with the forces of oppression in the ill-treatment of racial minorities, women, and homosexual persons,” he said, adding: “It won’t wash with young people, especially when we purport to treat gay people with love and compassion and yet define their sexuality as ‘intrinsically disordered.’”

But Catholic life-and-family leaders have stressed that it is precisely because of love that the Church warns people of the biological and spiritual dangers associated with genital activity between two persons of the same sex.

“This vice is the death of bodies, the destruction of souls, pollutes the flesh, extinguishes the light of the intellect, expels the Holy Spirit from the temple of the human heart, introduces the diabolical inciter of lust, throws into confusion, and removes the truth completely from the deceived mind. … It opens up hell and closes the door of paradise. … It cuts off a member of the Church and casts him into the voracious conflagration of raging Gehenna,” he wrote.

Basing itself on Sacred Scripture, the Church teaches that homosexual acts are “acts of grave depravity” and are “intrinsically disordered” because they are “contrary to the natural law” in that they “close the sexual act to the gift of life.”

In his lecture, Bishop Long lamented that the Church with its “old stereotypes” has not been a “shining beacon and a trail-blazer in the fight against inequality and intolerance.”

He stressed that the Church has much to “learn” from the world where the “identities and rights of the marginalized are accorded justice, acceptance, affirmation, and protection.”

Bishop Long slammed faithful Catholics who uphold Catholic teaching on marriage and sexuality, stating that it is the “holders of the tradition who are often guilty of prejudice, discrimination, and oppressive stereotype.”

He urged Catholics to adopt the “seamless garment approach” to the “victims of injustice,” stating that the Church “cannot be a strong moral force and an effective prophetic voice in society if we are simply defensive, inconsistent and divisive with regards to certain social issues.”

Bishop Long concluded his lecture by stating that the Church under Pope Francis is “on the threshold of renewal and transformation.”

“Pope Francis has unleashed a new energy, he has poured a new wine which cannot be contained in old wineskins. He has challenged us to move in concert with him and bring about the rebirth of the church. I am endeavoring to follow the pope’s lead,” he said.

When The Australian published a report on Bishop’s Long’s lecture earlier this week titled “Catholic bishop calls on church to accept homosexuality,” the bishop issued a statement the same day calling the headline “inaccurate and misleading.”

“It appears my lecture has been completely misrepresented,” he said. “It is disappointing that despite requests to have the inaccurate story amended, no changes have been made by the journalist or the publication.”