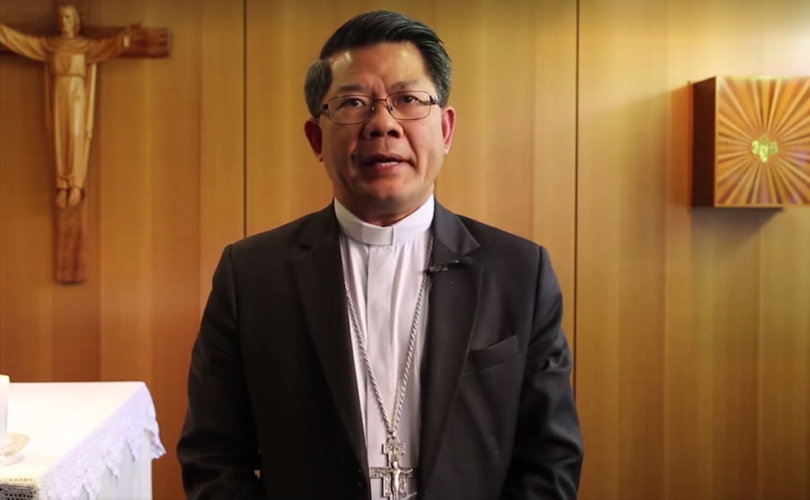 PARRAMATTA, Australia, September 14, 2016 (LifeSiteNews) — An Australian Catholic bishop appointed by Pope Francis is defending himself against reports that he challenged Catholic teaching on homosexuality in a lecture last month, as reported by LifeSiteNews and others earlier this week. But in a statement released today meant to set the record straight, the bishop nevertheless suggested that to “accept a person’s sexual identity” is in line with Church teaching. Meanwhile, an Australian priest has composed a detailed analysis exposing how the bishop's position “manifests serious flaws and errors”.

“The lecture was an effort on my part to articulate an understanding of the vision of Pope Francis of what the church is and our response to this vision in the light of the challenges we face today,” Bishop Vincent Long Van Nguyen of the Catholic diocese of Parramatta stated in a press release.

Bishop Long said that part of Pope Francis’ vision is about “being inclusive,” which includes the “ability to create and nurture a welcoming space for all people, including those who have been alienated such as our gay and lesbian brothers and sisters.”

The bishop called it a “misrepresentation of my lecture to equate the sexual identity of our gay and lesbian brothers and sisters with their lifestyle or behaviour,” adding, “To accept a person’s sexual identity does not mean to condone his or her behaviour which are contrary to moral norms and the church’s teaching.”

But it is the Catholic Church’s perennial teaching that not only homosexual acts but a person’s homosexual orientation can never be accepted as if it were part of God’s plan for human sexuality. The Church has reaffirmed this teaching repeatedly in numerous official documents in the last several decades:

Bishop Long stated today that his lecture “can in no way be construed as a challenge to the teaching of the Catholic Church, which as a bishop I wish to maintain in union with Pope Francis and my fellow bishops in communion with him.”

In his August 18 “Ann D. Clark Lecture” titled “Pope Francis and the challenges of the church today,” the bishop called being “inclusive” “one of the greatest challenges the Church faces today.”

“There must be space for everyone, especially those who have been hurt, excluded or alienated, be they abuse victims, survivors, divorcees, gays, lesbians. … The church will be less than what Christ intends it to be when issues of inclusion and equality are not fully addressed,” he said at that time.

Specifically, Bishop Long said that for the Church to be more inclusive and more attractive to young people it must put away discriminatory and judgmental language when speaking about homosexuality.

“We cannot talk about the integrity of creation, the universal and inclusive love of God, while at the same time colluding with the forces of oppression in the ill-treatment of racial minorities, women, and homosexual persons,” he said. “It won’t wash with young people, especially when we purport to treat gay people with love and compassion and yet define their sexuality as ‘intrinsically disordered.’”

Catholic life and family leaders have stressed that it is precisely because of love that the Church warns people of the biological and spiritual dangers associated with genital activity between two persons of the same sex. The Church calls everybody, including persons attracted to members of the same sex, to live in chastity.

“The Bishop implies that the struggles of the poor, the underprivileged, and the marginalised are somehow the result of the Church’s negligence, but he neglects to point out the real origin of human misery: and that is sin and the absence of God in people’s lives,” he wrote in an extensive commentary on the bishop’s lecture. “In general, Bishop Long has a tendency to ‘criminalise’ the Church of the past as though the Church has for centuries been a sort of culprit or at best unfaithful to the demands of the Gospel,” he stated.

Father Naughtin commented that the word “inclusion” used by the bishop is a “vague word” that is also used by ideologically driven groups to mean, in effect, “compromising the Gospel of our Lord Jesus Christ in order to accommodate sinful lifestyles.”

“We need to reject such an idea,” he wrote.

Father Naughtin further commented that while the Church “indeed offers homosexual persons the love of Christ,” it does so by “pointing out to them the true path to eternal life,” which is “faith in Christ and obedience to His commandments.”