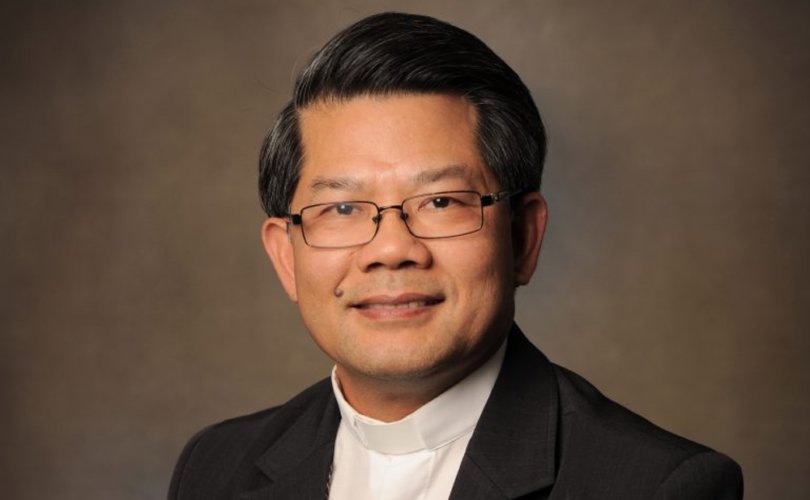 CHRISTCHURCH, New Zealand, October 23, 2018 (LifeSiteNews) – An Australian bishop recently told priests that admitting women to the priesthood in the Church's current state of affairs would be like pouring new wine into old wine skins, but that a “transformation of the priesthood” was underway.

Vincent Long Van Nguyen, Bishop of the Parramatta Diocese of Sydney, Australia gave an address in September to the New Zealand National Assembly of Diocesan Clergy about the current crises rocking the Church. Blaming the clerical abuse crisis on a faulty conception of the priesthood, Long mentioned women’s ordination as a possibility – but only after even more sweeping changes.

“… As important as it is to consider the question of women ordained ministry in the Church, it is far worse to persist with structures that fail to convey the message of the Gospel to the deep yearnings of the men and women of today,” he told his audience.

“Adding women into the mix in terms of admitting them to ordination might be likened to pouring new wine into old wine skins. For the Church to flourish, it is more crucial that we come to terms with the flaws of clericalism within the very structure of the Church and move beyond its patriarchal matrix,” Long continued.

The Bishop praised Pope Francis for unleashing a “new energy” and pouring a “new wine” upon the Church.

“Pope Francis has unleashed a new energy, he has poured a new wine which cannot be contained in old wineskins,” he said. He added later in his talk that such new wine is leading to a “transformation of the priesthood.”

I firmly believe that we are on the threshold of renewal and transformation of the priesthood. Like the wedding feast of Cana, the wine of old has served the Church well but it is running out. The old way of being a priest has, likewise, well served the Church we love. But that model of the exalted, separated and elitist priesthood is drawing its last breaths – at least in many parts of the world including Australia.

There is a better wine that the good Lord has prepared for us.

The new wine of God’s unconditional love, boundless mercy, radical inclusivity and equality needs to be poured into new wineskins of humility, mutuality, compassion and powerlessness. The old wineskins of triumphalism, authoritarianism and supremacy, abetted by clerical power, superiority, and rigidity, are breaking.

St. Pope John Paul II reaffirmed in his encyclical Ordinatio Sacerdotalis, however, the doctrine that women can never become priests, a teaching Pope Francis’s own choice for Prefect of the Congregation for the Doctrine of the faith has recently called “infallible”.  To put an end to all doubt, John Paul II wrote: “I declare that the Church has no authority whatsoever to confer priestly ordination on women and that this judgment is to be definitively held by all the Church's faithful.”

Despite two thousand years of influential Catholic female saints, queens and abbesses, the papal encyclical On the Dignity of Women, the perennial veneration of the Blessed Virgin Mary, and the prayerful participation of generations of women, Long believes that women have been excluded from the Church, made invisible in her language, her liturgy, her theology and even her canon law.

“So long as we continue to exclude women from the Church’s governance structures, decision making processes, and institutional functions, we deprive ourselves of the richness of our full humanity,” he said.

“So long as we continue to make women invisible and inferior in our Church’s language, liturgy, theology and canon law, we impoverish ourselves, as if we saw or we heard, only with one ear, and we saw with only one eye, and we think or we thought with only one half of the brain, and very often it has been proved, it’s been the lowest reptilian section thereof.”

The bishop then applied the metaphor of the “reptilian section” of the brain to the men of the Church:

“Because it’s…, you know, the reptilian section, the lowest part of the brain that’s responsible for your instinctual behaviour, your survival mode, your desire for control, and you know, you just wonder if this whole  culture of rigidity, legalism, triumphalism, has been buttressed by this thinking of the reptilian brain,” he said.

In this same speech, Long, who passively supported the establishment of same-sex “marriage” in Australia, called the “spotless bride of Christ” a “blatantly poor image” for the Roman Catholic Church.

“The separate, exalted, elitist priesthood is the by-product of the ecclesiology that emphasizes the perfection of the Church; and the Church as a perfect society, or the spotless bride of Christ,” he told the assembled priests. “The most spotless bride of Christ? That's a very blatantly poor image in the light of sexual abuse revelations isn't it? But let's not go down the path talking about spotless brides. So that ecclesiology needs to be consigned to the past.”

The source of the doctrine that the Church is the Bride of Christ is the Bible. Christ refers to himself as the Bridegroom, as attested by the evangelists Matthew (9:15), Mark (2:19) and Luke (5:34. John the Baptist refers to Jesus as the Bridegroom in the Gospel of John (3:29). Saint Paul explicitly described the relationship of the Church to Jesus Christ as that of a wife to a husband in his letter to the Ephesians (5:22-33). Paul told the Church in Corinth that he had “espoused” them to Christ (2 Cor. 11: 2-4) and again used a marital analogy to the Church in Rome (Rom 7: 2-4). The image of the heavenly Bride appears several times in Revelations.

Speaking as a bishop, Long lectured the priests on a clericalist culture in the Church, which he blames both for the collapse of the post-conciliar Church in Australia and the sex abuse crisis. At no time did he blame a culture of sexual permissiveness, homosexual networks, or even the sin of lust.

“We need to break the clerical, or clericalist culture, which is, really responsible for the dearth of the Church, or even the demise of the Church,” he said. “It is becoming increasingly evident, that the clerical sexual abuse crisis is a symptom of a dysfunctional, corrosive, and destructive culture in the Church.”

The bishop cited Pope Francis’ recent attacks on “clericalism” and wondered if cardinals and bishops “dressed in their finery” squirm in their seats when the Holy Father talks about it. He indicated that he himself had followed Pope Francis’ lead in simplicity by flying with a budget airline and praised the pontiff unreservedly while expressing dismay that other clerics had broken ranks.

In his eagerness to support Francis against his critics, Long even took a cheap shot at Archbishop Viganò, the whistleblowing former nuncio to the U.S. who recently accused Pope Francis of promoting now ex-Cardinal Theodore McCarrick despite knowing of his sexual predation of seminarians and priests.

“While Pope Francis was in Ireland, for the world meeting of families, one of his collaborators decided to fire a missile from his bunker in Italy, all the way across the Irish Sea,” Long said. “Who needs enemies with friends like that? Yes, it was the former nuncio to the USA, by the name of Vigano – sounds more like ’vinegar’.”

“… The myth of the mysterious, heroic, uncontaminated, unblemished “man in black” has been blotted,” he said. “Instead of doctoring the image, of reviving the mythology and mystic of the priesthood of yesterday, can we accept that what has been destroyed is irretrievable?”

“The temple and the temple-based priesthood was destroyed in the wake of the Babylonian invasion,” he continued. “There's something akin going on in the world of Catholicism today. Perhaps the end of the whole world will lead to a new era, and the current crisis offers the priesthood a chance to free itself from the manacle of clericalism. The priest is not alone as an exalted figure, exclusively chosen and gifted with something most people don't have.”

As an example of this outmoded exalted figure, Bishop Long offered the Cure D’Ars himself:

“Ironically, the whole clerical culture is often geared towards individual heroism and male chauvinism. The Cure of Ars, John Vianney, blessed John, he was a hard man wasn't he? He denounced dancing among other things. He is a patron saint par excellence for this kind of priestly individual heroism. No wonder many of us suffer from ministerial burn out, depression, and loneliness,” he said.

In place of the Church we’ve known in the past, Long suggests a “journey of conversion” but nothing concrete:

Bishop Long has a history of condemning the Church of the past despite the state of the Church today. He also raised eyebrows during the Australian referendum on same-sex “marriage” when he told Catholics both to witness to Church doctrine and be open to “what the Spirit is saying through the signs of the times.”

“I invite all Catholics in our Diocese to exercise our responsibility as citizens to engage in this community discernment. It should not be a matter of a simple answer Yes or No to the postal survey. It should be an opportunity for us to witness to our deep commitment to the ideal of Christian marriage. But it should also be an opportunity for us to listen to what the Spirit is saying through the signs of the times,” he wrote.