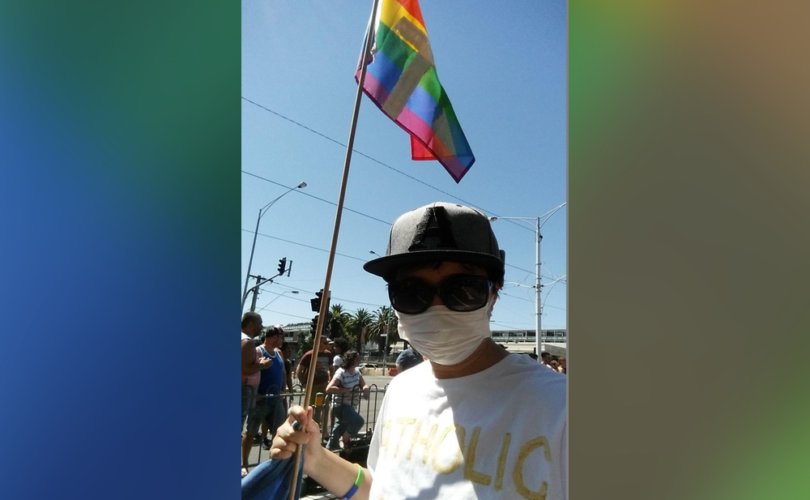 A member of 'Acceptance Melbourne LGBT+ Catholics' who is listed as a 'Co-Organiser' of the group on Meetup.com.www.meetup.com / screen grab

EAST MELBOURNE, Victoria, Australia, January 31, 2019 (LifeSiteNews) – The Archdiocese of Melbourne in Australia plans a “listening and dialogue” session for “LGBT” Catholics and others next week at its ongoing Plenary Council.

“Calling all LGBTIQA+ Catholics, Christians and the broader LGBTIQA+ community, family, friends and supporters to come along for a safe and inclusive conversation,” the Archdiocesan website states. The Archdiocese is led by Archbishop Peter Andrew Comensoli.

“What is discussed and determined by the Plenary Council will be based on a long listening to the Holy Spirit speaking through the voices of people from around Australia,” the Archdiocesan website states.

“This listening and dialogue process provides an opportunity to come together as a group to spend time thinking and talking about personal experiences of faith, life and church. Following this session, a submission will be made on behalf of the LGBTIQA+ community by Acceptance Melbourne, a community for LGBTIQA+ Catholics,” it adds.

According to the archdiocesan website, the first year was 2018 and a “Year of Listening,” with local listening and dialogue sessions and data compilation. This year of 2019 is a “Year of Discerning” where summary reports from the listening and dialogue sessions will be written up as the agenda for 2020. Called a “Year of Proposing,” 2020 has two Plenary Council sessions scheduled, one in October and another in May 2021, when proposed legislation will be voted on.

The Catholic Church teaches that homosexual acts are “acts of grave depravity” and that they are “intrinsically disordered.”

“They are contrary to the natural law. They close the sexual act to the gift of life. They do not proceed from a genuine affective and sexual complementarity. Under no circumstances can they be approved,” states the Catechism of the Catholic Church.

The Catechism further adds that the same-sex inclination is itself “objectively disordered.”

“It pains me to see the church in the state of ruin but worst of all it pains to see it being decimated to ashes by so-called ‘Princes’ of the church, our very own shepherds,” the source said.

An Australian priest also commented to LifeSiteNews, saying that the Archdiocese’ invitation to homosexuals is “causing scandal to the faithful and, once more, confusion and distress to faithful Catholics, including those who experience same-sex attraction and wish to follow the Church’s life-giving teaching on chastity and human sexuality.”

LifeSiteNews inquired with the Archdiocese about the event.

Archdiocesan Director of Media, Communications and Philanthropy Shane Healy told LifeSiteNews that some 40,000 people have taken part in either group discussions or submitted something for the Plenary, forwarding the submission form. The facilitated group sessions are focused on the question, “What is God asking of us in Australia at this time,” Healy said, and the “The process is one into which all Catholics are invited.”

The question of content of the upcoming “LGBTIQA+” session received no attention in the response.

Archdiocesan representatives, including the archbishop’s Office of Evangelization, will be involved as facilitators according to the archdiocese’s website. “Other key collaborators” include Melbourne Auxiliary Bishop Mark Edwards OMI, along with an archdiocesan priest and individuals representing a number of LGBT activist groups.

Acceptance Melbourne, which will make the submission after the listening session, is militantly against Catholic teaching on homosexuality.

“We are an open and affirming community in Melbourne, Australia that supports Catholics who identify as Lesbian, Gay, Bisexual, Transgender, Intersex and Queer,” the group states about itself on Meet Up. The group envisions a Church that “embraces and welcomes diversity, and is inclusive and open to all who identify as LGBTIQ, supporting their integration of faith, sexuality and gender identity.”

The group states that LGBT Catholics are “called to express our sexuality in a life-affirming and responsible manner.”