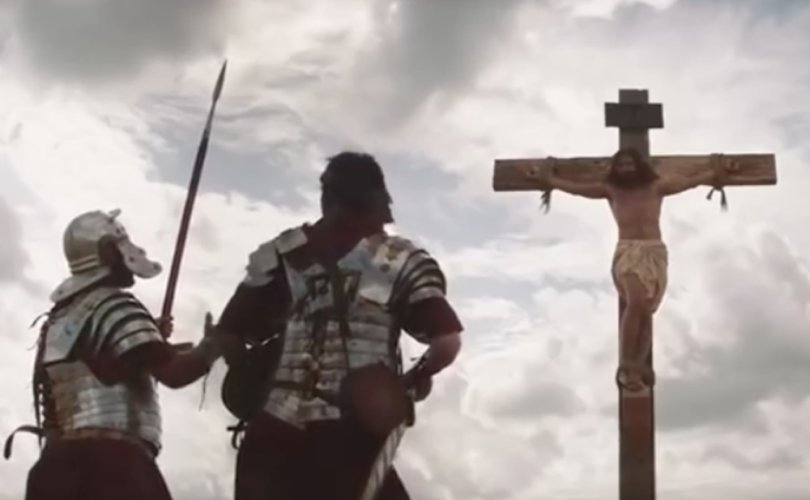 DEAKIN, Australia, October 19, 2018 (LifeSiteNews) – An Australian TV commercial encouraging organ donation features a comical portrayal of Jesus Christ dying on the Cross as Roman soldiers try to sign him up to donate his organs after death.

Christians are calling the commercial produced for the government-backed Dying to Live campaign “beyond blasphemous.”

An Australian Christian lobby group has launched a petition for the ad’s removal.

“Your promotion for organ donation has borrowed one of the most important moments in Christian history and used it as a cheap device to promote a message which many Christians would, in other circumstances, wish to support,” the group states.

“Your campaign has chosen to mock the beliefs of many people of faith in our nation. It hardly serves to recommend your message,” it adds.

The 2.5 minute film begins as a woman weeps while looking at Jesus Christ nailed to the Cross. The tone changes swiftly when two debonair Roman soldiers approach Jesus to ask Him to sign up as an organ donor. The characters giggle when they realize that Christ cannot sign up without help, His hands being nailed to the wood of the cross.

“Your organs could save the lives of up to six people – seven, seven people. Not to mention how your bones, soft tissue, and ligaments could change the lives of many others. And corneas – you’ll help blind people see. What a miracle,” the soldiers say in mocking tones.

“Obviously, I would do it, I am Jesus,” replies the man nailed to the cross.

The soldiers then push a smartphone attached to the tip of a spear up to the cross for Jesus to click the consent button with his pinky.

Michael Hichborn of the Lepanto Institute told LifeSiteNews that organ transplants are controversial enough without adding blasphemy to the mix.

“The grave moral problems associated with vital organ donation are bad enough. Heart transplants, for instance, are impossible without deliberately killing the donor,” he said.

“But to use Our Lord's sacrifice on Calvary to promote such things is beyond blasphemous.  Words cannot express the how serious an offense this is to Our Lord,” he added.

Many Christians do not know of the bioethical issues involved in organ donation. Not only are organs often taken from people who are not yet dead, the very definition of death has been changed to facilitate this practice. LifeSiteNews has reported a story about a young man who, after being pronounced “brain-dead”, was kept alive so that his organs could be taken–a necessary condition to keeping donated organs in peak condition.

Some doctors in the organ donor industry have even gone as far as asking that the “dangerously misleading” protocol of requiring “death” be dropped. Dr. Neil Lazar and Dr. Maxwell J. Smith of  Toronto and David Rodriguez-Arias of Universidad del Pais Vasco proposed in the “American Journal of Bioethics” that a more honest protocol would focus on the comfort and consent of the “dying” or “severely injured” patients whose organs are removed.

Christ’s mother Mary and his foster father Joseph are also featured in the film, to illustrate that in Australia family members must also give consent to a person’s organ donation.

After the business is done, the Roman soldiers pose for a selfie with Jesus in the background.

The commercial ends with a placard reading “Do what Jesus would do. Register at dyingtolive.com.au”

Here is a link to a recording of the commercial. Readers are warned that it is extremely offensive.

The film was supported by Australia’s Shark Island Institute, Documentary Australian Foundation and Goodpitch2 Australia. The filmmakers collaborated with a coalition of government agencies including the Organ and Tissue Authority and Donate Life.

The Australian Christian Lobby has asked the Dying to Live campaign to remove its advertisement.

“The act of Jesus dying on the cross for the sake of humanity is the personification of self-sacrificial love,” the group wrote on their petition. “It is an act revered not only by Christians but many people of faith. The fact that it is exploited for this advertisement demonstrates that it has broad cultural resonance.”

“So it is regrettable that this profound expression of sacrificial love has been trivialized as a cheap device for grabbing public attention,” they continued. “A different skit might have communicated the message without alienating a significant portion of the very audience it intended to engage.”

They said that they wanted to send a “clear message” to the director and Dying to Live that their mockery of Christianity was not supported by the community and that the film's director “has done the cause of organ donation a disservice.”

So far their petition is pushing 5,000 signatures.

Dying to Live describes the short commercial as an “impact ad.” On its website they advertise their full-length documentary film about the need for organ donation in Australia. It is also called Dying to Live.

Dying to Live campaign organizers state on their website that they created the commercial to be provocative.

“No doubt this will create some heated discussion. And that’s exactly the point of it all. To get people to talk about organ donation.”

Stated the commercial's director Richard Bullock: “ I wanted to deliberately provoke a conversation in homes around the subject. This is really difficult as nobody wants to bring up issues around death and organ donation over the dinner table.”

Campaign organizers state on their website: “Our aim is nothing less than putting a big surge in the number of Australians registering as organ donors.”

Some Australians took to social media to say the commercial crossed a line.

“The organisation Dying To Live and their advertising agency need to withdraw their offensive advertising campaign across Australia. They should consider the respect and dignity that needs to be afforded to donors and their families rather than their blatant attack on Christians in an attempt to get more donors,” Facebook user Robert Harmer posted.