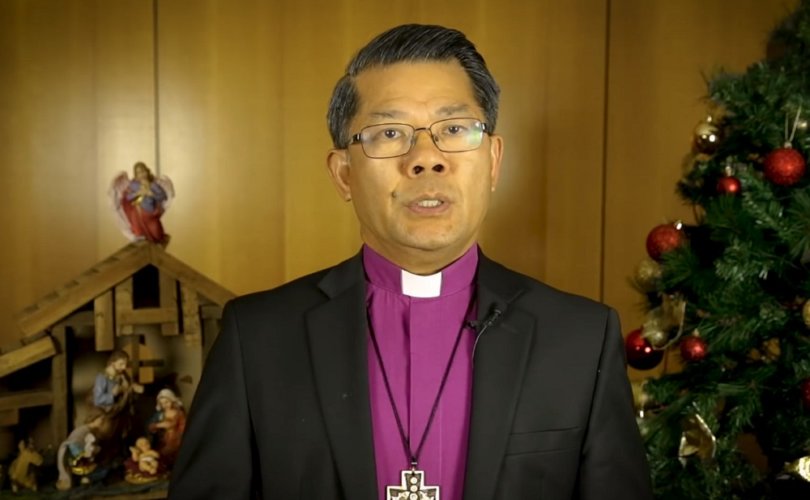 Year 7 and 8 students in the Diocese of Parramatta, Australia, will reportedly be asked “to recognise sexuality as an exploration in forming personal identity” and will discuss “Is sexuality optional?” “Does the Church’s teaching on sexuality have any value or relevance to modern life?” “How does social media construct sexual identity?”

“As you can imagine, I and other Catholics living in this diocese are extremely concerned about this new curriculum,” wrote one Catholic parent who is alarmed by the about-to-be-introduced religious education program.

Diocese school chief Greg Whitby acknowledged that the move would be controversial among devout Catholics but insisted that the change was necessary if religion teachers were going to engage students in religion, according to Australia’s Daily Telegraph on August 16.

“The new curriculum is not just a one way street,” claims Parrammatta’s prelate, Bishop Vincent Long. “It’s not just our teachers proclaiming tenets of the Christian faith and doctrines we believe in. Young people engage much better with the Christian faith much more meaningfully, personally and seriously when their questions, concerns and issues are taken up.”

“Religious education teachers must not just learn from the textbook or the teachings of the Church or the Bible for that matter,” insisted Bishop Long in a podcast interview.  “The onus is on them to dialogue with the young people, instead of just teaching them or proclaiming the faith to them.”

A commentary printed in The Daily Telegraph ten days after its initial article delivered a searing critique of the new curriculum, which amounted to the secular media outlet pointing out that the Diocese’s Catholic schools would cease to be Catholic with this new curriculum.

If McDonald’s stopped selling hamburgers and started dishing up sushi instead, it would no longer be McDonald’s.  People who once frequented the Golden Arches for a Big Mac and fries would stop going.

If they wanted woke secular indoctrination in LGBT studies, gender fluidity, identity politics and atheism, they would enroll their children in the local government ‘Safe School’ and save money on fees.

This is obvious.  But for some reason, Catholic schools in Parramatta have chosen to go down the woke path to oblivion, with a new religious studies curriculum that is just a Trojan horse to smuggle in a leftist political agenda. …

This dumbed-down, sex-obsessed sociology mumbo jumbo, disguised in the language of the Church, is supposed to make religion classes more ‘relevant’ to children’s lives and, insaltingly, to rescue the Catholic ‘brand,’ both reason enough to reject the curriculum.

“As a Catholic priest in the Diocese of Parramatta, I kindly remind the Catholic Education Office of Parramatta of their crucial responsibility in teaching their students of the importance of the 10 Commandments [and] the Catholic teachings of morality,” said Fr. John Rizzo, a priest of the diocese told the Daily Telegraph.

“Catholic faithful are sick and tired of politically correct agendas being thrown at the innocence of their children,” added the priest.

The new curriculum appears to align with the personal beliefs of the Parramatta bishop, whom the regional newspaper described as “woke local bishop Vincent Long,” as it strays from strict adherence to Catholic moral teaching.

In 2016, Long gave a lecture in which he denounced Church teaching that homosexuality is disordered. He said that he was simply following Pope Francis’s lead in calling on the Church to end “oppression” against gays and lesbians caused by “defin[ing] their sexuality as ‘intrinsically disordered.’”

“[Pope Francis] has refocused on the proclamation of God’s love for the poor, the vulnerable and the marginalized; … he has committed the church to the way of engagement, affirmation, and compassion, which is at the heart of the Gospel,” said Long at the time.

“We cannot talk about the integrity of creation, the universal and inclusive love of God, while at the same time colluding with the forces of oppression in the ill-treatment of racial minorities, women, and homosexual persons,” he said, insisting, “It won’t wash with young people, especially when we purport to treat gay people with love and compassion and yet define their sexuality as ‘intrinsically disordered.’”

Father Terence Mary Naughtin, the Latin Mass chaplain for Australia’s Wagga diocese, commented that the word “inclusion” used by Bishop Long is a “vague word” that is also used by ideologically driven groups to mean, in effect, “compromising the Gospel of our Lord Jesus Christ in order to accommodate sinful lifestyles.”

“We need to reject such an idea,” he added.