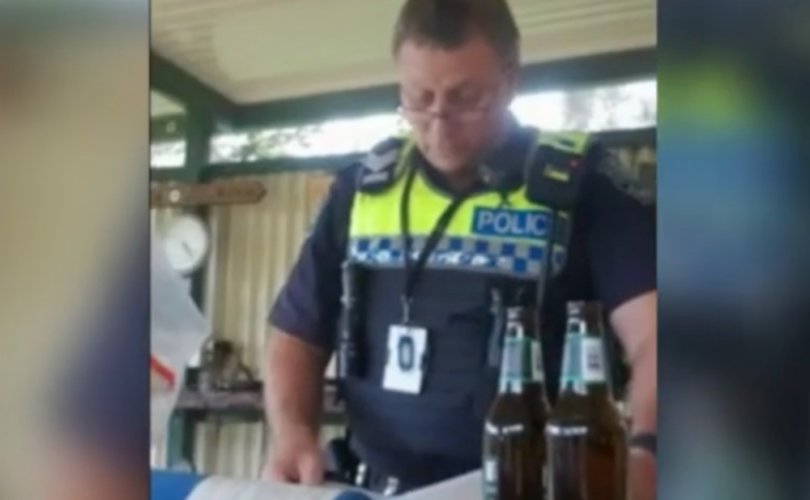 ADELAIDE, Australia (LifeSiteNews) — An Australian doctor was visited by police and questioned after he sent emails to his local MP to voice his concerns about the COVID-19 vaccines.

Dr. Bruce Paix, a former military doctor with 32 years of experience, was visited by the Australian police at his home in Adelaide, South Australia last week.

Initially,  the  police said that they had  come to Paix’s house to perform a firearms check.

But an officer caught on video later revealed that he had come in relation to emails Paix sent to his local South Australia MP, Josh Teague, voicing his concerns about the COVID vaccines and the vaccine mandates.

“I am a senior doctor in the South Australian Government system, having some 32 years in service as both a rescue doctor and Anesthesiologist,” Paix wrote in his email to the news site.

“I also have experience in managing health threats (as a senior military Dr. – indeed I was the Senior Australian Military Dr in the Middle East when MERS [Middle East Respiratory Syndrome] was an issue) and hold a first-class honors degree in a public health field, as well as specialist training in Anesthesia,” he added.

Paix explained that he spent thousands of hours educating himself on COVID-19 and concluded that “nothing about the world’s COVID response template makes sense (including in my own state of South Australia) and indeed is likely harmful.”

Paix added that he was particularly concerned by the COVID vaccines and the media censorship around adverse events.

“The vaccines in particular have numerous valid safety risks, and knowledge of these is being systematically suppressed by governments, professional bodies, and media,” he wrote.

He also denounced the ban of effective early treatments against COVID-19, such as Ivermectin, a treatment often denied to COVID patients despite evidence of its efficacy against the virus and the potentially lethal consequence of preventing its use.

“Valuable therapeutic options (Vit D, Ivermectin) are being outlawed in favor of a ‘jab or nothing’ strategy,” he argued.

The former military doctor said he contacted Josh Teague’s office multiple times to outline his concerns. He also asked to meet with Teague, but his request was denied.

“He simply didn’t want to hear anything that didn’t align with the official ‘Masks, QR codes, lockdowns, jabs’ strategy.”

In his last email to Teague, Paix made a reference to the Nuremberg trials, saying he did not care that Teague refused to meet with him, since the long trail of emails between them would suffice to give evidence against him at the “Nuremberg 2 trial.”

Paix said the MP’s response was to “send the police around to threaten me [and] to pull my head in – as the video file shows.”

In the video, the police officer tells Paix that his emails “have come to the attention of the police and are drawing attention to you, which you probably don’t need or don’t want.”

Paix called the policeman out on the fact that his visit was politically motivated.

“Just so I understand the purpose of your visit: you’re here to do a firearms-check which is not random, you’re actually doing it in context with the fact that I’m in dispute with my local politician—because you’ve already admitted that to me,” he said.

The police officer admitted that he was not aware of any criminal offense contained in Paix’s emails to Teague.

“As far as I’m aware, no criminal offense has been committed,” he said. “My aim is just to let you know that police are aware of these emails.”

“So, I’m not allowed to have robust discussions with my MP?” Paix asked.

Paix is not the only physician in Australia to have been targeted for his medical opinion.

— Article continues below Petition —
HELP AUSTRALIANS restore their freedom by protesting outside YOUR Australian Embassy - Dec. 4th - US
Show Petition Text
7079 have signed the petition.
Let's get to 7500!
Thank you for signing this petition!
Add your signature:
Show Petition Text

In his email to The Gateway Pundit, Paix mentioned an incident which occurred only five days prior, when the clinic of another Australian physician, Dr. Mark Hobart, was raided by health officers, and his confidential patient files and appointment book were confiscated.

Both Paix and Hobart had been issuing vaccine and mask exemptions to their patients, and Paix also provided his patients with instructions on how to obtain Ivermectin to protect themselves against COVID-19.

“Given your recent story about the Melbourne GP who [had] his office raided by the COVID police, I thought my own experience might be of interest. I have also been consulting and issuing a number of ‘mask exemptions,’ ‘vaccine exemptions,’ and instructions on how to obtain and use veterinary Ivermectin, and expected to be raided similarly also,” he wrote.

According to The Gateway Pendit, Paix is now unemployed as a result of his so-called ‘vaccine hesitancy’ approach.

Australia has made several headlines this year for targeting physicians, as well as for its totalitarian-like implementation of strict lockdown policies.

Only two days ago, two remote aboriginal communities were fully locked down by the Australian government, and at least 38 of the residents were hauled into military trucks and taken to a quarantine facility after nine people there tested positive for COVID-19.

Australian police have also been  reported  using violence  and intimidation tactics against protesters or anyone suspected of not complying with the country’s harsh COVID measures, or of expressing dissenting opinions on COVID vaccines.

Dr. Bella d’Abrera, Director of Foundations of Western Civilization Program at the Institute of Public Affairs in Melbourne recently described Australia as “a police state.”