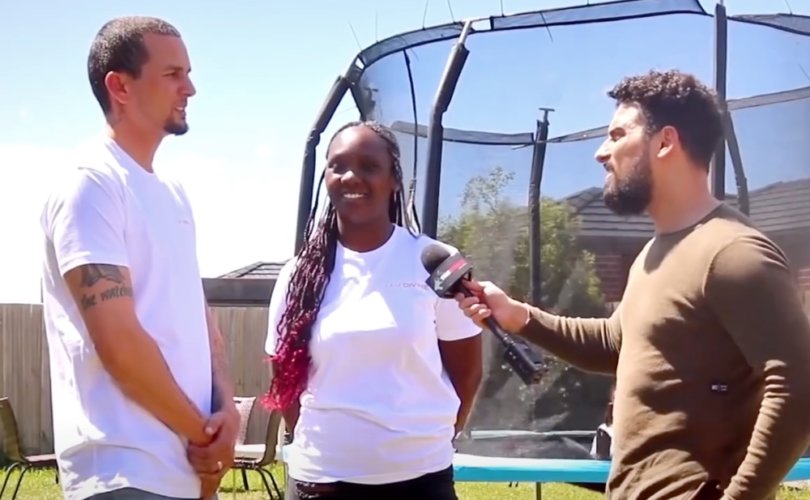 MELBOURNE, Australia, October 14, 2020 (LifeSiteNews) – A young family has fallen foul of the extreme laws and restrictions currently in force in the state of Victoria, Australia, and has been served with a $10,000 fine.

Joshua and Ailes Deen and their four children live in the town of Kurijang in the outskirts of the city of Melbourne. Returning from a short drive to replenish their supply of vitamins, the family was stopped by Vitoria Police for crossing over the arbitrary line marking the city border.

In an interview with Rebel News, Ailes Deen recounted how, after explaining their story to the police, the family was told they would receive fines of “a thousand dollars each, and when they came in the mail they were five thousand dollars.”

The current laws regarding the COVID-19 restrictions in the region state that individuals are only allowed to leave the metropolitan area for a minimal number of reasons, of which buying necessary goods is included.

However, the fine was issued to the Deen family on September 19, whilst Melbourne was in an even stricter lockdown, forbidding residents to leave their homes except for essential shopping, exercise, permitted work or caregiving. Crossing the border from the metropolitan area into regional Victoria was not permitted under this level of lockdown, and an additional 5km travel limit was also in place.

Joshua Deen described how their proximity to the regional border necessitated traveling across it: “I drive down my street and I turn left and that’s the very road that I got pulled over on, the road that leads to my street.”

Despite the heavy financial penalties incurred for crossing the border, there were no indications given of where the border was. “There’s no signage, there’s no nothing, there’s no roadblocks here,” said Joshua.

Expressing his own disbelief at the amount of the fine, the interviewer mentioned that “people are going to want to join us in the fight to fight this fine.”

He went on to describe the fines as going against all logical behavior: “Where is the common sense? Where is the discretion of the police officers? Surely someone in the state of Victoria can see that fines like this aren’t just irrational — they’re devastating to real families.”

A lawyer engaged to dispute the fine on behalf of the Deen family, pointed to the fact that the police had been extremely heavy-handed in issuing the fine. “Police have a discretion when issuing infringements and the community is entitled to expect that they exercise that discretion appropriately. $10,000 is a significant penalty for a young family…obviously well beyond their capacity to pay.”

Joshua urged others in similar situations to “stand up for yourself, stand up for your rights, and if you know you’ve done the right thing, speak up. I think that’s the only way we’re going to get through these hard times we’ve got in front of us.”

Victoria has come under international scrutiny for its excessive restrictions related to COVID–19. British newspaper, The Guardian reports that the Victorian government is facing “three class-action lawsuits over the lockdowns…with potentially thousands of plaintiffs seeking damages.”

On a recent episode of the John-Henry Western show, Dr. Bella d’Abrera described how “the crushing, anti-freedom measures taken by the Victorian government during COVID-19 are reminiscent of 1960s Berlin.”

In addition to the $4,957 fines issued to anyone entering regional Victoria from metropolitan Melbourne without good reason, shops in the regional area are being forced to check that their customers are not from the metropolitan area. Failure to do so will result in a fine of $9,913 for the business.

The government website further states that non-compliance with travel restrictions can result in a fine of up to $20,000 for individuals and $100,000 for businesses. Anyone caught not wearing a face mask without a legitimate reason, faces a fine of $200.

Around 2,000 soldiers have been deployed onto the streets in Victoria, to enforce the draconian laws.