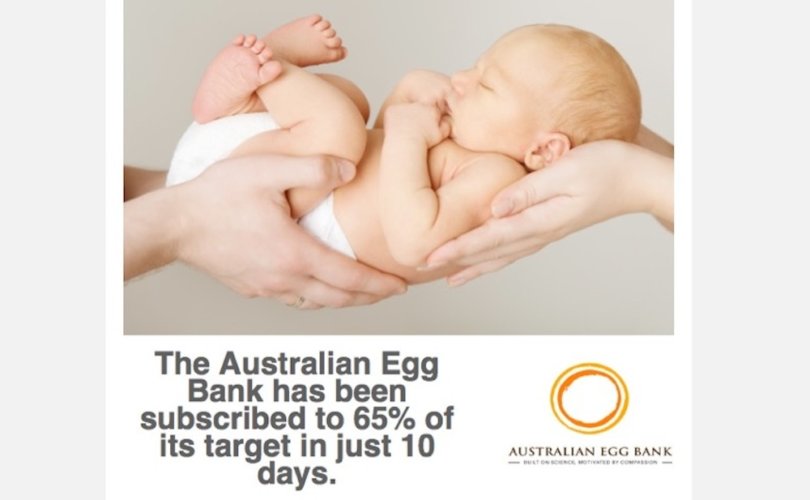 SYDNEY, Australia, September 22, 2016 (LifeSiteNews) — An Australian investment firm is raising $2.5 million to fund the creation of the country’s first dedicated human “Egg Bank.” Although profiting from human eggs is illegal in Australia, that has not stopped Groundfloor Capital from promising investors “above average returns” on Australian Egg Bank’s shares.

The firm appears to be moving quickly to raise the capital to launch the business at the beginning of October, before government regulations make it difficult to do so.

“The IVF industry has been an exercise in exploitation since its inception and now the storage of human eggs has become a necessary requirement of that process,” he said.

“People are looking to make money out of whatever they can without a second thought,” he said.

Egg harvesting carries significant risks. The process, known as “superovulation,” requires that the woman be administered large doses of hormones that stimulate her ovaries to release up to 30 eggs in a cycle. This can lead to ovarian hyperstimulation syndrome, manifested by chest pain and bloating. The woman’s eggs are then harvested under anesthesia by means of a needle inserted through her vaginal wall. While many extractions do not harm the woman, potential side effects include infection, the swelling of ovaries to many times their usual size, infertility, stroke, cancer, and in rare cases, death.

Earlier this week, 60 Minutes Australia ran a show in which host Allison Langdon revealed the country’s black market trade in human eggs while arguing that the country should loosen its laws against the buying and selling of human eggs to make it more fair for women.

But Jennifer Lahl, founder and president of The Center for Bioethics and Culture Network (CBCN), told LifeSiteNews that egg harvesting amounts to female exploitation.

“What is most disturbing to me is that young women are being ‘eggsploited’ with incentives of money, to ‘help’ someone or advance science. In medicine, there are bright lines that should never be crossed. This is an example of those lines being not just blurred but ignored with total disregard for the health and well-being of a young woman,” she said.

In 2010, the CBCN released “Eggsploitation,” a documentary that revealed through the stories of individuals who had their eggs harvested how shameless the industry is in promising safety while leaving behind a trail of damaged victims.

Lahl said women should not be put at risk for monetary gain.

“From a moral perspective, we see medicine and science willing to risk healthy young women's lives in order to obtain eggs. This is highly troubling for people like me that feel doctors have a fiduciary duty to do no harm and that research must not be advanced on the risk to others,” she said.

Dr. Moira McQueen of the Canadian Catholic Bioethics Institute agrees with Lahl that an Egg Bank means exploitation of women.

“Women are being used or exploited on the basis of one of their body parts for someone else’s benefit,” she said, noting that the human body with its various parts has become just another commodity.

“It’s a business, it’s profitable, so why not? Who will set the market price? Considering how desperate some people are to achieve pregnancy, the costs will be as high as the market will bear. This is not about helping women!” she said.