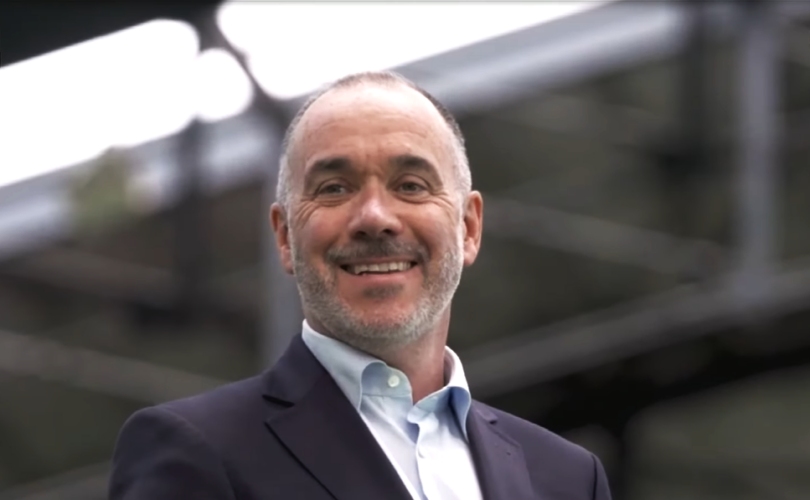 (LifeSiteNews) – An Australian Football League club executive was forced out just one day after taking over as team CEO because of his Christian faith.

Andrew Thorburn, former head of National Australia Bank, was compelled to resign from his new position as head of the Essendon Football Club, the Bombers, after it became known that the Anglican Church where he serves as a board chair deems homosexuality to be a sin and abortion to be murder.

Thorburn was “hounded out of a job by the incessant hateful rhetoric from anti-Christian bigots in the community who joined in,” according to Spectator Australia’s Joel Agius in a commentary titled “A new age of Christian Persecution.”

“As soon as the mob found out that Thorburn was a Christian, outrage ensued. The mob began to go after him, attacking him for holding Christian views,” Agius said.

“This is not about victimhood. This is by all means about the persecution of a Christian man in the West, by those who often preach tolerance no less,” he said, pointing out the hypocrisy of the woke.

“Persecution of Christians is seemingly becoming fashionable again. Anti-Christian bigotry is being paraded around as some warped sense of virtue,” Agius asserted.

After the controversy erupted, Essendon president David Barham asked Thorburn to choose between his positions at the church and the football club, according to a report in The Age.

According to the same report, some legal experts believed “Thorburn could have a legal case for religious discrimination.”

“Only those with pre-approved beliefs will be welcomed,” Robertson noted. “Those who blaspheme against ‘progressive’ doctrines will be suitably excommunicated. Welcome to the fundamentalist church of the woke!”

Catholic Archbishop Peter Comensoli of Melbourne expressed a similar sentiment, telling Talk radio 3AW that the Essendon team’s rejection of Thorburn represented a “a rejection of so many other people of faith by their actions.”

“It really concerns me deeply,” the Archbishop told The Age. “It is quite a bizarre reality we seem to have entered into where people are being judged unworthy to lead because of some of their basic Christian beliefs.”

“Someone should not be discriminated against and ostracized because of their religious views,” Adel Salman, president of the Islamic Council of Victoria, told The Age. “I feel sorry for everyone involved and I just hope this doesn’t become a commonplace occurrence.”

“The personal has truly become the political. Personal faith is no longer personal or private,” said Financial Review columnist John Roskam, a senior fellow at the Centre for the Australian Way of Life at the Institute of Public Affairs.

“What’s expected of people like Thorburn,” Roskam continued, “is a public profession of adherence to the prevailing cultural and political orthodoxy. Neutrality is not enough.”

“Men shouldn’t marry other men; women shouldn’t kill their unborn children,” declared George Upper in his Western Journal commentary.  “What amounted to obvious common sense not too long ago, even in the public square, is now considered ‘controversial’ doctrine.”

“For worshipers at the altar of spirit of the age, there are rules — rules that must not only be followed, but rigidly enforced on others,” Upper added.  “Even in Australia.”

Agius said that Victorian Premier Daniel Andrews’ condemnation of Thorburn was “appalling.”  He went on to lambaste Andrews:

If Daniel Andrews was truly Catholic, if he lived by Catholic values, he would not have an issue with Andrew Thorburn nor his beliefs, nor his now quashed appointment as the CEO of Essendon.

In a statement issued after the resignation, Thorburn pointed to the danger represented by the Essendon club’s move, threatening all people of faith:

Over the past 24 hours, I have received hundreds of messages of support and would like to thank all of those people, from a diversity of faiths and beliefs, who have reached out to me.

Concerningly, many messages expressed genuine worry for jobs and employment prospects due simply to faith. I believe that there are many Australians who fear the implications for their livelihoods, aspirations and participation in community life.

It is troubling that faith or association with a church, mosque, synagogue or temple could render a person immediately unsuited to holding a particular role. That is a dangerous idea, one that will only reduce tolerance for others and diversity of thought and participation in our community and workplaces.

Freedoms of thought, conscience, religion and association are fundamental human rights, explicitly recognised in Victorian law in our Charter of Human Rights and Responsibilities and the Racial and Religious Tolerance Act.

I genuinely and passionately believe people can hold different views on complex personal and moral matters while being able to live and work together respectfully and harmoniously. That is true inclusion whereby our communities are enriched by difference.

“While Christians will no doubt continue to be persecuted throughout society in many different ways, we should not allow it to discourage us from continuing to practice and share our faith with others,” Agius wrote in his Spectator Australia commentary.  He concluded:

Christianity shaped the Western world. It helped to establish a culture of good morals and community. But there are now people who seek to shift the culture entirely to one devoid of morality. Such a culture enables some of the worst aspects of humanity to come to the forefront of society and take hold. It only leads to suffering.

Christians must continue to be courageous and stand up for what they believe in, no matter what.