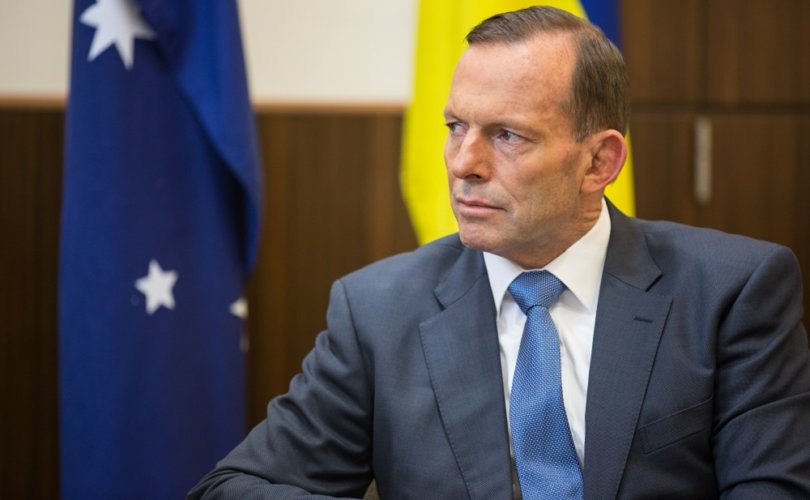 Tony Abbott, a former Australian premier, and Barnaby Joyce, a former deputy P.M., spoke to the Stand for Life rally of human rights advocates on Sunday, where thousands of people stood in defiance of the Reproductive Healthcare Reform Bill currently before the New South Wales parliament. Abbott said the bill would lead to “infanticide on demand,” while Joyce called it a product of “the slavery debate of our time.”

If passed, the bill will legalize the killing of unborn babies upon request up to 22 weeks gestation, while physicians would have to approve abortions at any time after that. The bill would remove abortion from the state’s Crimes Act and redefine it as a medical procedure that is regulated under other norms.

Many of those at the rally were notably young and bore placards reading “Love them both,” “Stand for life,” and “Pro-woman, pro-life, pro-choice.”

Abbott told his listeners at Hyde Park in Sydney, “We elect sensible governments of the center-right to serve us in practical ways, not to engage in social engineering.”

Reportedly, the bill is slated to go before the NSW Upper House later this week. It passed the legislature’s lower house (59-31) in August. It was due for a vote in the upper house, but Premier Gladys Berejiklian agreed to delay its passage after a split within the Liberal Party, of which she is the head.

Berejiklian voted for the bill, while Deputy Premier John Barilaro and Opposition Leader Jodi McKay seconded her. Seven members of Berejiklian’s own party voted against the bill, including attorney general and minister for the prevention of domestic violence Mark Speakman and planning minister Rob Stokes. Abbott criticized Berejiklian for allowing the bill to come up for consideration, saying it was not what she and her party were elected to do. “The first serious legislation that the new government puts into this parliament is for the most radical abortion laws in this country,” he said. Abbott added that the bill is premised on a lie, saying, “Whether we like it or not, abortion has been decriminalized in this state for up to sixty years.”

Abbott said he fears that sex-selection and late-term abortions will ensue as a result of decriminalization, saying it is “effectively infanticide on demand.” Likening it to the infamous abuse of convicts in Australia by the British government and America’s slave trade, Joyce said language in the bill referring to the “fetus” instead of a “person” is a strategy of dehumanization. Joyce said, “If you can vote down an amendment [for sex selection] because they’re a boy or girl, then why stop there? Why not vote them down because they’re too dark or too fair or the wrong complexion? When does this animalistic process stop?”

“There is not one person here who was not born,” Joyce told rally-goers. “There comes a time when there are two people, and two people have rights, and those rights must be respected. Otherwise, society is destroyed.

“If you want to kill someone, how do you do it? You dehumanize them, you give them another word, you don’t call them a person…‘well, I’ll call them a fetus or a thing.’”

Joyce said of his opponents, “They had a longer inquiry into koalas,” adding, “I love koalas, but I think a person is more important than a koala.”

Reverend Fred Nile, of the Christian Democrat Party, told the rally, “This is the worst bill in 38 years. I call it the ‘kill bill.’”

A much smaller rally of protesters in favor of the infanticide bill showed up on Saturday. Dee Madigan told protesters that proposed amendments to the bill would make for unacceptable limits on the practice. She said that “amendments are being brought in that have the power to make things worse for women than they currently are.” Jane Caro said placing limits on infanticide is unacceptable, saying they are proposed “to continue them having some control over us and what we do with our lives.” She said, “I hope that common sense prevails and that the women of NSW can join with their sisters across Australia in being allowed to be fully adult, fully free and in control of their own bodies and reproductive systems.”