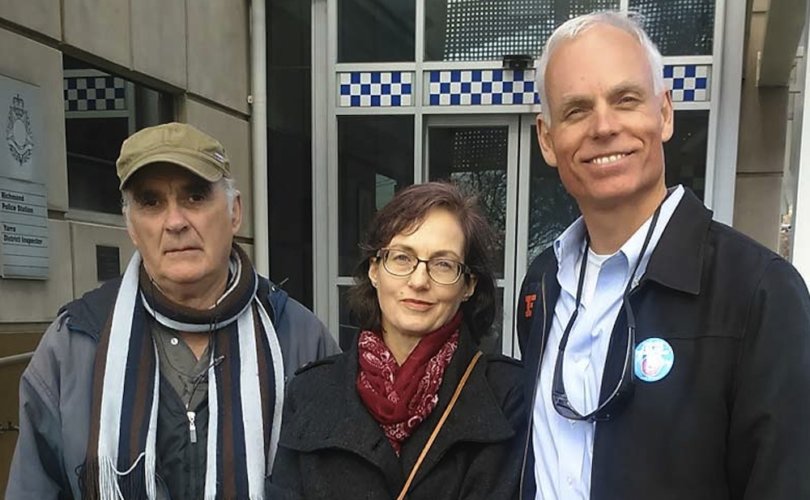 Richard Grant, Kathy Clubb and Jeremy Orchard (left to right) are members of the Helpers of God’s Precious Infants.

MELBOURNE, Australia, August 4, 2016 (LifeSiteNews) — A mother of 13 has become the first person to be arrested under Victoria’s “bubble zone” law and plans to take her case all the way to the High Court in an effort to challenge it.

Blogger Kathy Clubb was arrested outside the Fertility Control Clinic in East Melbourne while volunteering for the Helpers of God’s Precious Infants.

Speaking exclusively with LifeSiteNews, she said, “I stood outside the clinic holding pamphlets. Then I approached a couple who were entering the clinic and I asked them if they wanted any information about the help we offer. They declined and went in to the facility.”

The 150-meter “bubble zone” law was set up in 2015 to protect abortion clinics from “protesters” offering help to anyone seeking an abortion. Abortion clinic owners had complained for years about the actions of pro-lifers such as the Helpers of God’s Precious Infants.

Victoria has what are considered the most liberal abortion laws in the world, with terminations available up to 24 weeks for any reason and up to birth if two doctors believe it is appropriate. The conscience rights of doctors to not refer for abortions were also stripped away by 2008 legislation. As reported by LifeSiteNews, Australian doctor Mark Hobart was targeted in 2013 for refusing to refer.

When police approached Clubb and asked what she was doing, she responded, “I was offering help to women. They advised me that I was in breach of the law. They asked me if I would desist. I said that I intended to stay there and continue, and they told me that in this case they’d have to arrest me.”

She praised the police for their professionalism and consideration of her well-being throughout the process, which will begin with a hearing in the Magistrate’s Court in December. It could take up to three years for the case to reach the High Court.

Even with a strong support base already in place, Clubb was still overwhelmed by the prayer and emotional support from the pro-life community. “This is an issue which is bigger than abortion, as important as that is. It’s about our right to inform and it’s about the public’s right to be informed,” she said.

Victorian MP Rachel Carling-Jenkins was hardly surprised by the arrest. “As soon as the law was passed, it was inevitable that this was going to happen. It’s well overdue,” she said.

“This legislation passed by the Victorian parliament earlier in this term clearly discriminates against one group of people, and that’s people with pro-life values.

“This clearly targets people with pro-life values and attacks our freedoms. So we no longer, under this legislation, have the freedom to assemble, the freedom to protest, and to speak out across a large section of Melbourne. Those 150-meter exclusion zones cover just about all of it.”

Carling-Jenkins emphasized that pro-life supporters need the protection of the law in public. “We’ve been targeted, been verbally abused, and yet none of the helpers has ever been arrested or found guilty of doing anything wrong,” she said. “These are a very brave group of people who stand outside the clinics and this law has basically criminalized them.”

Victorian MP Bernie Finn was present when the current laws were passed in 2008 and also considers the challenge to be overdue.

“It's an inevitable development. Laws must be just to be respected,” he said. “This law is designed to deny the civil rights of a section of the community, namely those who oppose the killing of babies. It is wrong in every way. My view is this law breaches the Australian Constitution. We'll now find out if the courts agree.”

LifeSiteNews contacted the Fertility Control Clinic for comment, but the managerial staff was not available.

Donations toward the legal defense fund are being handled by Family Life International.